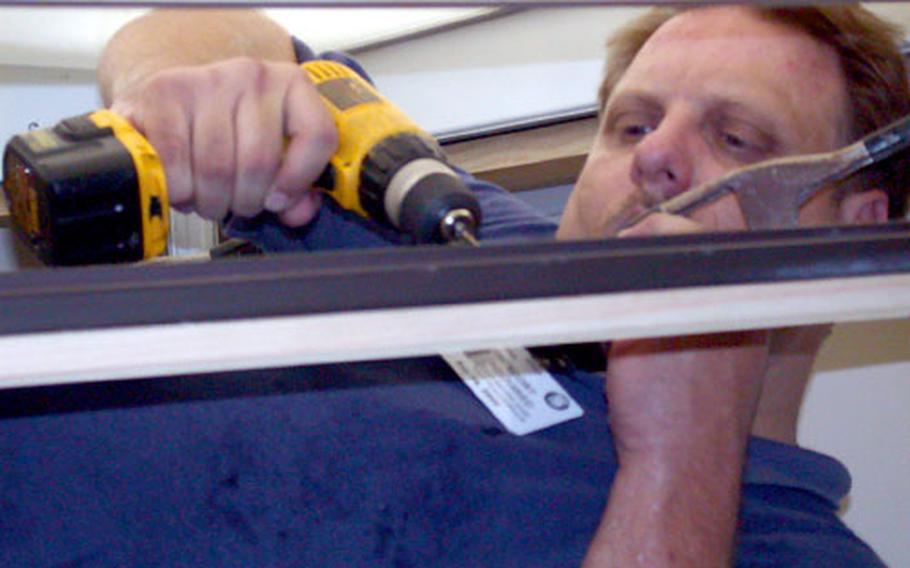 David Roberts affixes one of the 130-pound stained-glass windows to the specially-designed frame in the Pentagon Chapel. (Sandra Jontz / S&S)

David Roberts affixes one of the 130-pound stained-glass windows to the specially-designed frame in the Pentagon Chapel. (Sandra Jontz / S&S) 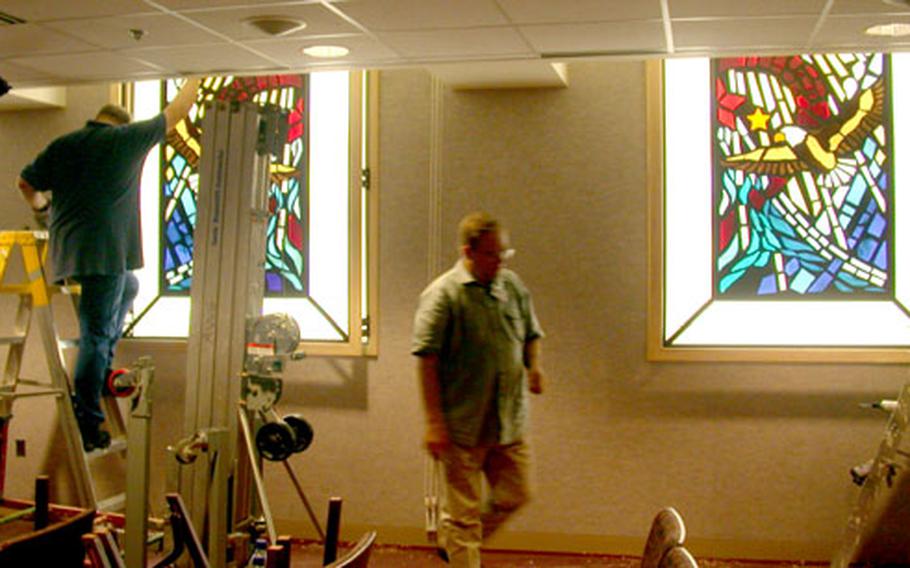 Pentagon employees last week placed pieces of glass into molds that eventually became four stained-glass windows honoring those who were killed in the terrorist attacks of two years ago. (Sandra Jontz / S&S)

ARLINGTON, Va. &#8212; When God came knocking, yet again, Dennis Roberts said he finally had to answer the door. And opening it took him away from 22 years in the airline industry and into creating ecumenical stained- glass windows.

Callings with nothing in connection.

But life doesn&#8217;t always need to make sense. It just has to make you happy, he said.

Roberts, 57, and his son and business partner, David Roberts, are the designers behind stained- glass windows that adorn the Pentagon Chapel, built just feet from the sight where a hijacked jetliner slammed into the western Pentagon wall two years ago in a terrorist attack.

Four of the five Roberts-designed windows will be dedicated Thursday during a ceremony observing the two-year anniversary of the Sept. 11, 2001, terrorist attack on the Pentagon that killed 126 Defense employees and 58 passengers aboard American Airlines Flight 77. The fifth window, in the shape of the Pentagon with an eagle in the center, was dedicated last year during a ceremony opening the tiny, mauve-carpeted chapel that offers a place for visitors to seek moments of solitude.

More than 3,000 people died in the attacks on the World Trade Center towers, the Pentagon, and an airliner that is thought to have been bound for Washington, D.C., before it was brought down in a Pennsylvania field by passengers.

In the four panels, Roberts, who in 1982 started IHS Studios (which stands for In His Service), designed an anchor to illustrate strength and a nation grounded in truth and reverence. A tree represents growth and life, enclosed in a circle to represent eternal life. The two center panels, mirror images of each other, contain an eagle, a national symbol, touched by rays of light from heaven.

The style of the 130-pound stained-glass windows is known as dalle de verre, and consists of setting cut glass in a stone base and sealing it together with epoxy.

In all, employees gathered over the two days to lay 766 pieces of glass that form images in four panes that are symbolic of strength, patriotism and hope, Dennis Roberts said.

So when Joe Burlas, an Army spokesman who knew five of the 126 Pentagon victims, set his red glass piece in place, he said a silent prayer of his own.