Buy Photo
Defense Secretary Leon Panetta shakes hands with the men who work at the National Memorial Cemetery of the Pacific in Hawaii. Panetta paid tribute to the nation's veterans during a Veterans Day observance before embarking on a trip to several nations in the Pacific. (Jennifer Hlad/Stars and Stripes)

Buy Photo
Defense Secretary Leon Panetta shakes hands with the men who work at the National Memorial Cemetery of the Pacific in Hawaii. Panetta paid tribute to the nation's veterans during a Veterans Day observance before embarking on a trip to several nations in the Pacific. (Jennifer Hlad/Stars and Stripes) 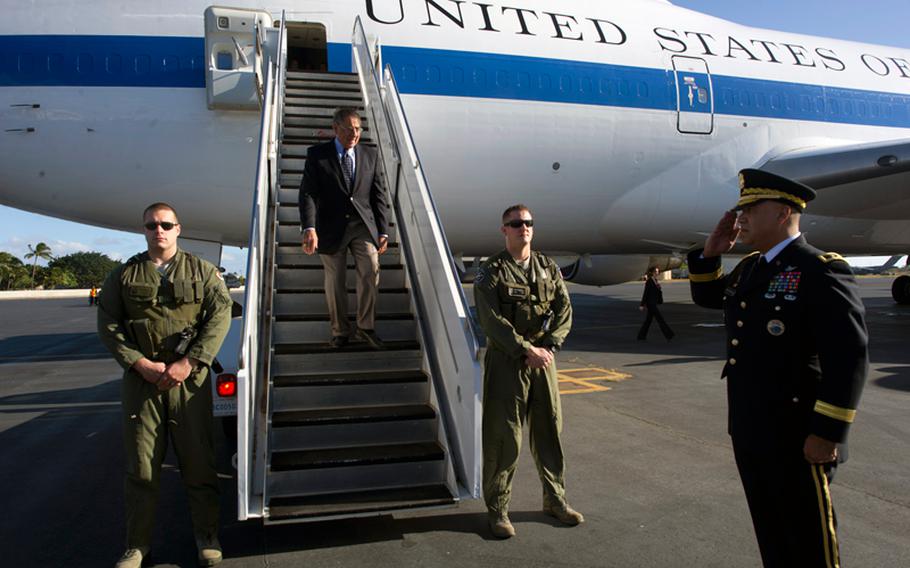 Defense Secretary Leon Panetta steps off his plane as it lands in Honolulu on Nov. 11, 2012. (Erin Kirk-Cuomo/Defense Department)

EN ROUTE TO PERTH, AUSTRALIA &mdash; The Pentagon and the White House will likely make a decision in the next few weeks on the role of U.S. troops in Afghanistan after 2014, based on options provided by Gen. John Allen, Defense Secretary Leon Panetta said Monday.

The options take into consideration the missions the U.S. still needs to address after the majority of troops withdraw in 2014, such as counterterrorism and continued training of Afghan national security forces, Panetta told reporters aboard his flight to Australia.

The decision on Afghanistan will hinge on how best to respond to and accomplish those continuing missions, he said, but will be in line with the current plan for withdrawal.

Panetta is traveling to Asia to meet with other defense ministers and continue to tout a shift of U.S. forces and focus to the Pacific. This is his third trip to the region in six months.

Though he has announced a plan to base 60 percent of the Navy&rsquo;s ships in the Pacific by 2020, as well as make other troop and equipment shifts to the area, Panetta said the rebalance &ldquo;cannot just be about moving more ships or aircraft or troops to the region.&rdquo;

Instead, he said, it must be a government-wide approach that includes diplomatic and economic engagements as well as development assistance &mdash; and funding that will keep the commitment to the region sustainable long term.

&ldquo;I really do think that, coming out of the election, this is a real opportunity for both Republicans and Democrats to address the fundamental challenge that faces this country with regards to our deficits,&rdquo; Panetta said.

The Pentagon has &ldquo;already made a significant contribution to deficit reduction,&rdquo; he said. &ldquo;We&rsquo;ve done it in a responsible way and responded. &hellip; Frankly, before they look to any more money from discretionary, I want to see some progress with regards to both entitlements as well as on revenues.&rdquo;

It&rsquo;s crucial that Congress agrees to a real solution on sequestration, rather than just delay it, Panetta said.

&ldquo;If they just kick the can down the road, it will just continue to represent a cloud over the Defense Department, and that&rsquo;s the last damn thing I need right now, is to have more uncertainty.&rdquo;

While there has been some talk of Panetta stepping down in the next few months &mdash; and he has said he would love to move back to California full time &mdash; he isn&rsquo;t sure yet how long he&rsquo;ll stay in office.

&ldquo;Who the hell knows?&rdquo; he said. &ldquo;There are a lot of challenges right now in regards to defense issues in Washington: sequestration, budget issues, issues related to planning on Afghanistan. &hellip; My goal is to basically meet my responsibilities in terms of dealing with those issues, and that&rsquo;s the most important focus I have right now.&rdquo;