Pentagon was surprised by attempted coup in Turkey 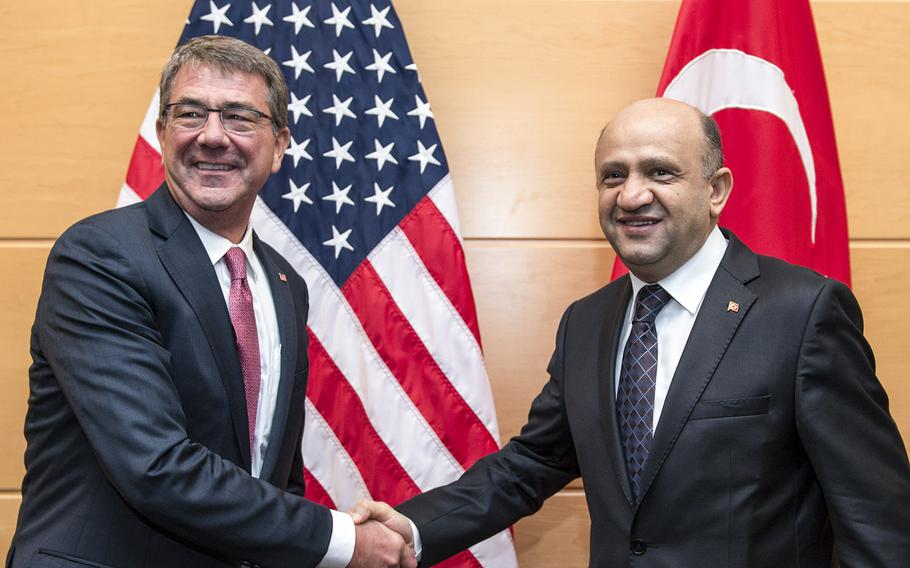 In a June 14, 2016 file photo, Secretary of Defense Ash Carter poses with newly-appointed Turkish Minister of Defense Fikri Isik at the NATO headquarters in Brussels, Belgium, June 14, 2016. Isik is one of several officials invited to Andrews Air Force Base on Wednesday to discuss strategies to counter the Islamic State group. It's not clear whether he will still attend the meeting. (Brigitte N. Brantley/DOD)

WASHINGTON – Secretary of Defense Ash Carter and the Pentagon were caught off guard last week by the attempted coup in Turkey, despite having thousands of U.S. military personnel stationed in the country, Press Secretary Peter Cook said Monday.

“I think it’s fair to say that the secretary was surprised by the activities on Friday, as others in the U.S. government were,” Cook told reporters Monday at the Pentagon.

A contingent of revolting Turkish military officers seized helicopters, tankers and fighter jets Friday and took temporary control over the cities of Ankara and Istanbul. But the attempted coup was suppressed within hours and the Turkish government resumed control of both cities. More than 6,000 people have been arrested as a result of the coup attempt, including the Turkish commander at Incirlik Air Base, where the bulk of U.S. personnel in the country operate.

More than 3,000 U.S. military personnel are still in Turkey operating out of three bases: Incirlik, Diyarbakir Air Base and Gaziantep Army Base. The U.S. military also conducts occasional exercise or training rotations through Aksaz Naval Base in Mugla.

The Pentagon had removed most non-essential personnel from the country over the last several months due to the increased unrest, and only about 100 dependents remained at the time of the attempted coup, Cook said.

Despite the heavy presence and daily interactions with their Turkish counterparts to run multiple airstrikes against the Islamic State group from the southern Turkey air base at Incirlik, Cook said the Pentagon was unaware a coup was looming.

Carter has not been in contact with Fikri Isik, Turkey’s defense minister, since the attempted coup, Cook said. Isik is one of several officials invited to Andrews Air Force Base on Wednesday to discuss strategies to counter the Islamic State group. Cook said it was not clear whether Isik will still attend the meeting.

Cook said all U.S. personnel were accounted for since the coup attempt and the military had taken the steps required to secure aircraft and weapons that the United States stores at Incirlik. Cook would not discuss whether those protection measures include a reported stockpile of B61 nuclear bombs at the base.

“I’m not going to talk about our strategic assets anywhere in the world,” he said.

Cook said U.S. aircraft began launching daily airstrikes against the Islamic State group from Incirlik after a brief suspension of operations. However, he said power has not been restored to the base and operations are running on back-up power sources.