Pentagon: USS Cole off Yemen coast to respond to threats 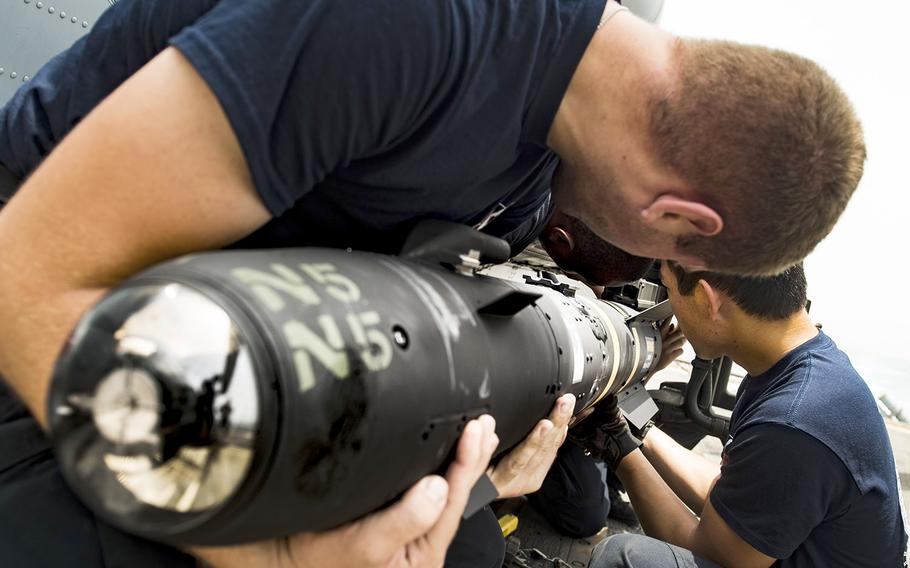 In a July, 2016 file photo, sailors load an AGM-114 Hellfire missile onto an MH-60R Seahawk Helicopter on the flight deck of the guided-missile cruiser San Jacinto in the Bab el Mandeb strait. (J. Alexander Delgado/U.S. Navy)

WASHINGTON — The Navy destroyer USS Cole is cruising off the coast of Yemen to defend access and ships transiting the Bab el Mandeb strait, a U.S. defense official said Friday.

Navy Capt. Jeff Davis, a Pentagon spokesman, said Thursday that the United States was prepared to defend access to waters off the coast of Yemen where a Saudi frigate was attacked earlier this week.

“The Red Sea and … the Bab el Mandeb [strait] is a vital waterway that the world relies on for the free flow of commerce,” Davis said. “We will ensure that maritime traffic continues to get through that critical strategic waterway.”

“When we see things like what happened to the Saudi frigate earlier this week take place it gives us great pause,” Davis said. “This is on top of other things we’ve seen -- to include the well-known missile attempts against U.S. ships last fall -- we’ve seen evidence that the Houthis are laying mines in the waters outside at least one of their ports. We officially have great concern for the freedom of navigation there.”

The Cole, an Arleigh Burke class guided missile destroyer, was hit by a suicide boat on Oct. 12, 2000, while in port at Aden in Yemen. Seventeen sailors died in that al Qaida attack.

In October 2016, Houthi rebels fired missiles twice at the USS Mason and two other U.S. ships. At the time of the attacks, the ships were also traveling through the Bab el Mandeb strait, which connects the Red Sea to the Gulf of Aden. The United States responded, firing missiles to destroy three known Houthi-controlled radar sites.

The United States has supported a Saudi-led air campaign against the Houthi rebels in Yemen, and continues to provide that support, Davis said.