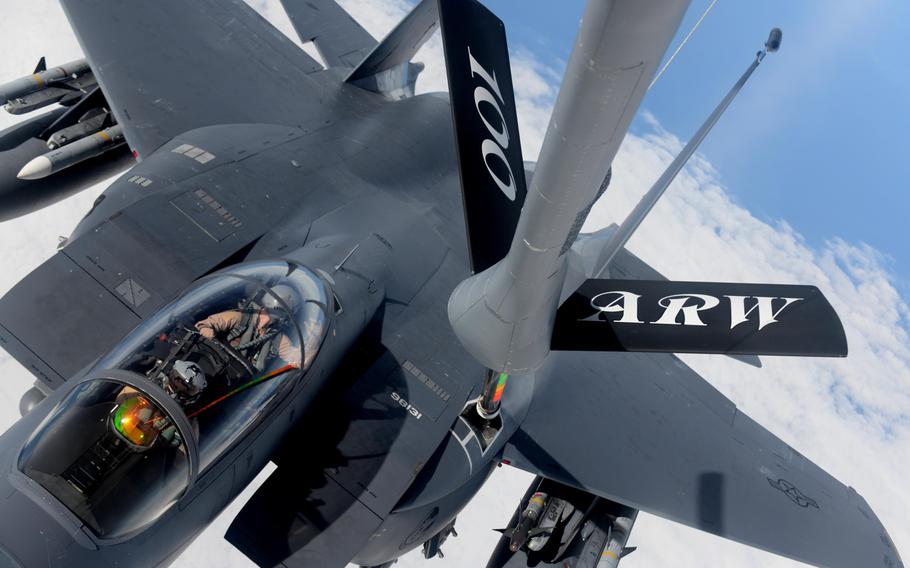 An F-15E Strike Eagle performs an aerial refueling operation over the Mediterranean on Nov. 12, 2015, as the United States and its allies examined plans to strike militants in Libya. U.S. warplanes attacked an Islamic State training camp in Libya on Friday, Feb. 19, 2016. (Kate Thornton/U.S. Air Force)

WASHINGTON — American warplanes attacked an Islamic State terrorist training camp early Friday in the deadliest known U.S. airstrike to date in Libya, killing at least 30 militants and targeting one of the group’s top operatives in the region, according to Pentagon officials and reports from the ground.

But Peter Cook, the Pentagon press secretary, said Friday that the assault – the second against a senior Islamic State operative in Libya in recent months – does not necessarily signal an increase in American operations in the war-torn North African country where officials have said the terrorist group is a growing threat with several thousand fighters.

“This may not be the last,” Cook said, refusing to speculate about future attacks there. “We saw an opportunity to strike at (the Islamic State group) in Libya and we feel confident this was a successful strike.”

The main target of the operation was the militant known as Noureddine Chouchane, a senior Tunisian operative who served as key facilitator in the movement of fighters in and around

Libya. Cook would not say where Chouchane was moving the fighters, only that they posed a threat to “American interests.” Chouchane had been linked to two major terrorist attacks in Tunisia.

It was not immediately clear whether Chouchane had been killed in the strike, Cook said, and the results of the mission were still being assessed.

“Destruction of the camp and Chouchane’s removal will eliminate an experienced facilitator and is expected to have an immediate impact on [the Islamic State’s] ability to facilitate its activities in Libya, including recruiting new [Islamic State] members, establishing bases in Libya, and potentially planning external attacks on U.S. interests in the region,” he said.

The attacks come as the United States considers whether to intensify the pace of airstrikes in Libya, where Islamic State fighters have been a growing presence for the past year.

The terrorist organization is concentrated mainly in the coastal town of Sirte, the hometown of Moammar Gadhafi, the former leader of Libya whose regime was toppled in a 2011 NATO bombing campaign.

Cook did not say whether the airstrike would be followed by further military action. The strike “demonstrates we will go after (the Islamic State group) whenever it is necessary, using the full range of tools at our disposal,” he said.

Retired Navy Cmdr. Chris Harmer, an analyst at the Institute for the Study of War, said Friday’s airstrike was the start of a long-coming push by the Pentagon to dismantle Islamic State growth in Libya.

“The Pentagon sees [the Islamic State] has morphed into exactly what al-Qaida was after 9/11,” Harmer said, referring to how the group dispersed into independently operating affiliates after the Sept. 11, 2001 terror attacks in New York City and Washington, D.C. “The [Islamic State] is doing the same thing, expect they are doing it preemptively.”

The civil war in Libya has generated scores of independent rebel groups that the Islamic State is recruiting, Harmer said. There are now an estimated 3,000 to 6,000 Islamic State militants operating in the country.

“They’ve got to hit [the Islamic State} in Libya before they become the biggest group in Libya,” Harmer said.

The Pentagon has been preparing for greater expansion into Libya for months. It recently added a $200-million line item in its proposed 2017 Overseas Contingency Operations budget to expand its counterterrorism operations in Northern Africa, including Libya. The wartime fund already has a separate line item for operations against the Islamic State in Iraq and Syria.

In January, Marine Gen. Joseph Dunford, chairman of the Joint Chiefs of Staff, said plans for taking “decisive” action in Libya were under review.

“It’s fair to say that we’re looking to take decisive military action against [the Islamic State] in conjunction with the political process” in Libya, Dunford told reporters at the time.

Friday’s F-15E fighter airstrikes hit a farmhouse occupied by Islamic State militants outside Sabratha, who were mainly of Tunisian descent, according to The New York Times, which first reported the strike.

As many as 60 people – mostly Islamic State group fighters, trainers and recruits – had been present at the camp in recent weeks as the United States surveyed it, Cook said, though he would not reveal how many people were killed in the attack. The Reuters news agency quoted Sabratha’s mayor as saying 41 people were killed.

There are likely similar camps in other parts of Libya that could be targeted in future operations, Cook said. This particular camp, he said, was attacked Friday because of the presence of Chouchane, who is believed to have had a hand in the June attack on a resort hotel in Tunisia that killed 38 people, mostly from Europe.

“We believe that this group posed a threat … in the short term,” Cook said, without identifying how that was determined or what the threat might be. “We were able to strike this facility before they posed an even bigger more significant threat.”

“If you want to have a desired effect, you’ve got to do a lot more than one or two airstrikes here or there. It’s got to be a sustained campaign,” he said. “Look at Iraq where we’ve been doing airstrikes for 18 months. It put pressure on [the Islamic State] but does not fundamentally shift the arc of the conflict. If you want to really kill these guys, you need guys on the ground calling in airstrikes.”

Since 2011, the United States has been conducting surveillance operation, launching occasional strike missions against high-value targets, and has quietly deployed special operators to survey the landscape and work with Libyan government partners.

Those special operators have been able to get “a better sense of the playing field” in Libya as the United States works to ally with moderate, indigenous fighting groups, Cook said.

In November, the United States conducted an airstrike in Libya that killed the country’s top Islamic State leader. Nearly two years ago, U.S. special operators in Libya captured a key suspect in the 2012 attack against U.S. interests in Benghazi in which the U.S. ambassador and three other Americans died.

“We want to confront (the Islamic State group) as it pops up,” Cook said. “We’ve seen the threat that they pose in Libya, specifically, their efforts to try and organize and become a more coherent group in Libya, as they have in Syria and Iraq, and we’re doing everything we can for that not to happen.”