Pentagon: US troops under fire in battle for Mosul 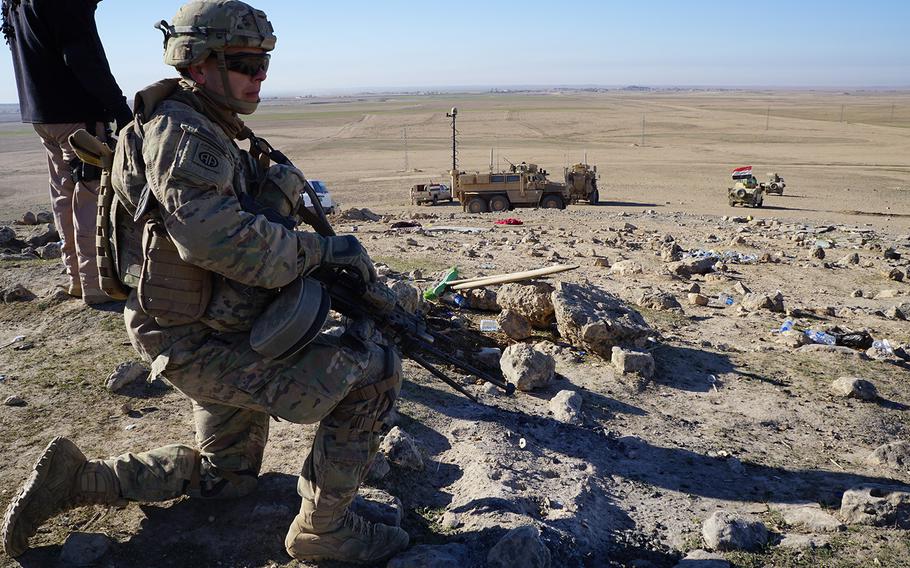 Members of the 9th Iraqi Army Division and the U.S. Army advise and assist team watch a unmanned aerial system while tracking the progress of brigades clearing the village of Bakhaira, Iraq, on the first day of the battle to liberate Mosul, Feb. 19, 2017. (Timothy Irish/U.S. Marine Corps)

WASHINGTON – U.S. troops embedded with Iraqi forces have been engaged in combat as they move closer to the front lines in the battle for Mosul, the spokesman for Operation Inherent Resolve said Wednesday.

“When someone is shooting at you that is combat. Yes. That has happened,” Air Force Col. John Dorrian, the Baghdad-based spokesman for Operation Inherent Resolve, told reporters at the Pentagon.

U.S. troops have come under fire and returned fire multiple times, he said, though the emphasis is still on having Iraqi forces retake western Mosul and not “fight the enemy for our partners.”

He said 450 conventional forces and an undisclosed number of U.S. special operators are embedded with Iraqi Security Forces and Iraq’s elite Counter Terrorism Service, respectively. The U.S. forces are embedded with troops as advisers, which includes calling in airstrikes.

Iraqi and U.S. forces liberated the eastern half of Mosul in late January and are now beginning their offensive to take the western portion of the city.

U.S. forces have been moving closer to the front lines in recent weeks, instead of remaining at command headquarters, and have the authority to assist smaller units of Iraqi forces near the fighting.

“We adjusted our posture during the east Mosul fight and embedded advisers a bit further down into [Iraqi ground units],” Townsend said, according to Fox News.

Based on the most recent figures available, 31 U.S. servicemembers have been wounded in the fight against the Islamic State group. However, that includes more than just the recent Mosul offensive, and the Pentagon did not release details on those incidents.