Pentagon: US troops move closer to Manbij, Syria, to remind other forces that the fight is with Islamic State 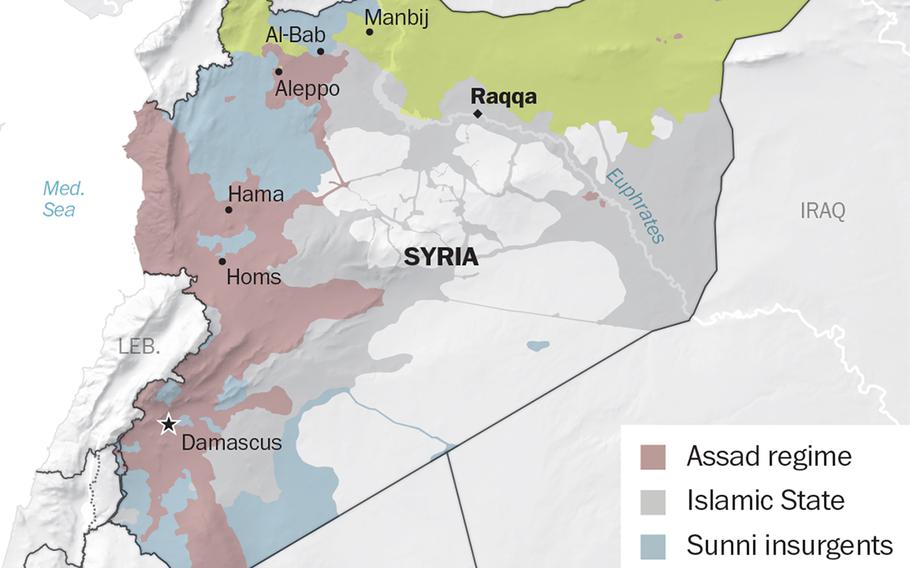 A map showing who's in control of various parts of Syria, as of February 27. ()

WASHINGTON – The United States has deployed small teams of troops into a crowded northern Syrian battlespace to help focus several armed forces in the region on the battle against the Islamic State group, a Pentagon spokesman said Monday.

U.S. troops moved closer to Manbij City over the weekend flying large American flags on top of their Stryker armored combat vehicles and Humvees as a display for the other forces converging in the area, said Navy Capt. Jeff Davis, a Pentagon spokesman. Manbij, which was liberated last summer from the Islamic State, is a key Syrian city about 70 miles northwest of Raqqa, the terrorist group’s capital in the country.

“We want to have a visible show that we are there in order to deter all parties from fighting anybody other than [the Islamic State group] and to reassure that [the group] has been driven from Manbij,” Davis told reporters Monday at the Pentagon. “Manbij is liberated and there is no need for further fighting there.”

The U.S. military has been in northern Syria for nearly a year, but its mission has been primarily to train and advise rebel forces fighting against the Islamic State group. The Pentagon has refused previously to acknowledge precisely where U.S. troops have been operating in the country, preferring American soldiers blend in with the rebel groups.

But with tensions mounting near Manbij between the Syrian Democratic Forces, the primary U.S. proxy force in the fight against the Islamic State group, and NATO ally Turkey, the U.S.-led anti-ISIS coalition decided the American deployment was necessary.

In the last week, the Syrian Democratic Forces, Turkish forces with the Syrian rebels they support and Russian-backed Syrian regime forces have converged near Manbij. In some areas, including around the neighboring city of al-Bab, the forces are all within “hand-grenade range” of each other, Army Lt. Gen. Stephen Townsend, the commander of the anti-Islamic State group coalition, said last week.

He urged all of the armed groups to retain their focus on the Islamic State group, which is still present to the south of Manbij.

“We have said that we would strike if the YPG fails to withdraw,” Cavusoglu said, according to a Bloomberg report. “Our demand from the U.S. and its new administration is to have the YPG leave Manbij as soon as possible.”

The YPG is a Kurdish militia, known as the People’s Protection Unit, which makes up roughly 40 percent of the Syrian Democratic Forces, and was instrumental in Manbij’s liberation in August following months of intense fighting, according to the Pentagon.

Turkey considers the YPG a terrorist group for its perceived links to the PKK, a Kurdish separatist group considered terrorists by Turkey and the United States.

The United States has insisted the YPG is not a threat to Turkey. More so, the Pentagon has said the group has long left Manbij, giving control over to the U.S.-vetted and primarily Arab Manbij Military Council, which is another faction of the Syrian Democratic Forces.

“The goal here is ensure there is no misunderstanding about who is holding Manbij,” Davis said Monday. “Manbij is being held by the Manbij Military Council … and the legitimate enemy, [the Islamic State group], is to the south, and that’s where anyone who is seeking to fight anyone there should be focused on.”

The U.S. troops assigned to Manbij consist of conventional forces and special operators and are on a temporary deployment, Davis said. He declined to say how large the teams were, though he said they were too small to conduct any sizable combat operations. Davis added the teams have no plans to fight anybody.

The Islamic State group “is not present in this location,” he said. “This is a different mission.”

Davis said Turkey, Russia, the Syrian government and the Syrian Democratic Forces are “aware of what we are doing.”

“We are concerned about anybody viewing Manbij as needing to be liberated,” he said. “Manbij has been liberated.”