Pentagon: US, Russian forces in close proximity in Manbij 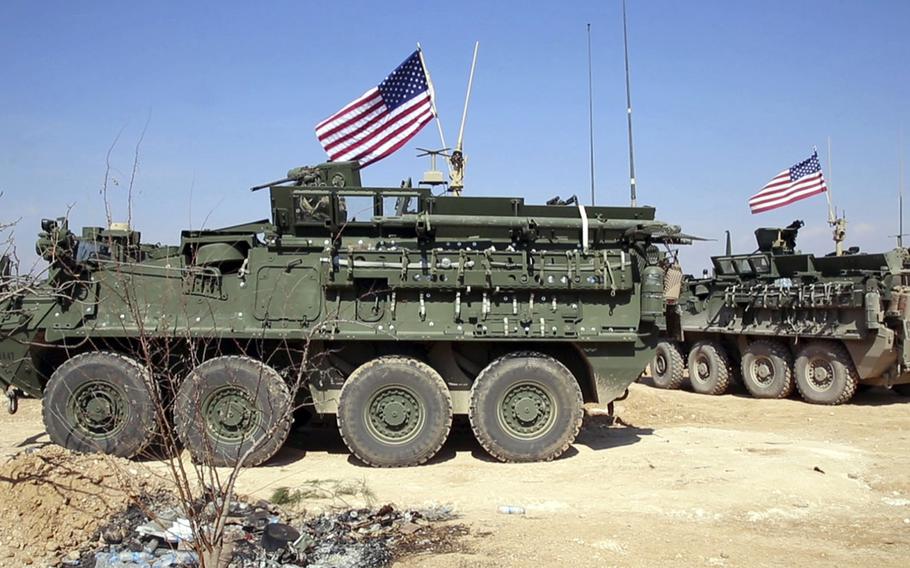 WASHINGTON – U.S. and Russian forces have been flying their country's flag and communicating more frequently to avoid mishaps as they operate within viewing distance of each other in the Syrian city of Manbij, a defense spokesman said Wednesday.

That’s why Army Rangers were seen on social media last week flying a U.S. flag off the back of their Stryker armored vehicles and Humvees, said Col. John Dorrian, the Baghdad-based spokesman for Operation Inherent Resolve.

“Our forces have been more visible,” Dorrian told reporters at the Pentagon. ”You’ve seen this on social media, the flags flying and that sort of thing. I don’t have an estimate as to when they’ll kind of go back to a more normal presence, but at some point, they will.”

In the last few weeks, an additional 400 U.S. troops – including the Rangers in Manbij and a contingent of Marines near Raqqa – have deployed to Syria in addition to the 503 U.S. special operations and support forces already authorized to be in the country.

The Marines near Raqqa are there with artillery to assist in the coming offensive to retake that city from the Islamic State group. On Wednesday, the Washington Post, citing defense officials, reported that up to 1,000 additional troops from the 82nd Airborne Division and 24th Marine Expeditionary Unit are being considered for the Raqqa fight. Two U.S. defense officials who spoke on the condition of anonymity told Stars and Stripes that no decision has been made and there was no imminent movement planned.

“There are a lot of plans on the table” for how to defeat the Islamic State group, one official said.

The Rangers in Manbij, however, are there in a “reassurance” role to keep competing elements of Turkish and Kurdish forces from fighting each other. They are also there to ensure the Islamic State group does not return and report on any movements in Manbij, Dorrian said.

Pro-Syrian regime Russian forces are also in the city now, Dorrian said, and U.S. forces are flying the flag “to make sure that there is no mistake or miscalculation about who is there.”

“I would say that when our forces go into a city … and they’re visible, that this has a reassuring effect on the people in the area,” he said.

Dorrian also said the Russian forces have similarly put out their flags, and that the two militaries are working in close proximity in Manbij, a medium-sized Syrian city that had a pre-civil war population of less than 100,000 people.

“They can observe each other’s movement,” Dorrian said.

The close proximity has resulted in increased use of a U.S.-Russian phone system, which started in late 2015 after Russia began conducting airstrikes in Syria. The communication line was implemented to ensure U.S. and Russian aircraft did not collide or inadvertently target each other’s forces. At first, the two forces would communicate a couple times a week, Dorrian said, though it has increased.