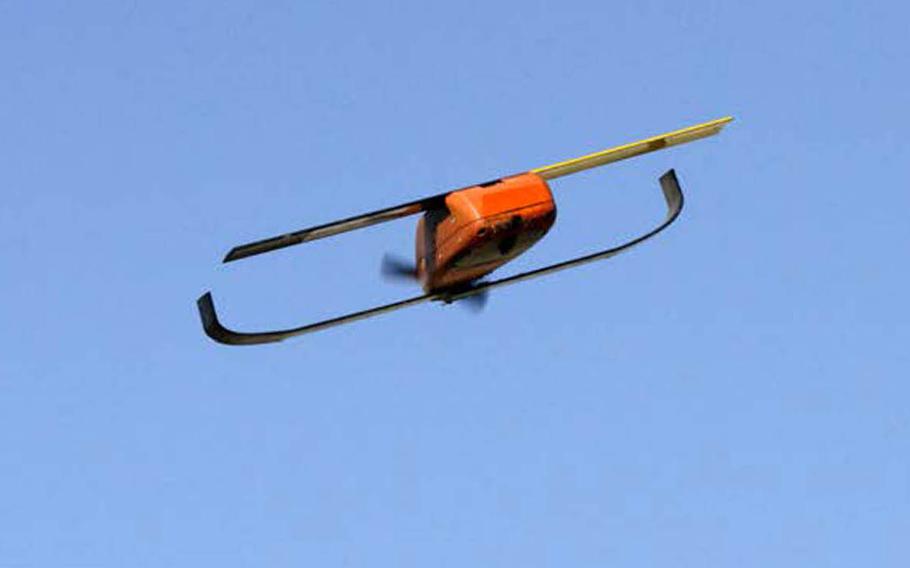 The Pentagon's Strategic Capabilities Office unveiled the Perdix micro-drone swarm to millions of television viewers Sunday night on CBS in what the military officials called "one of the most significant tests of autonomous systems under development." (Courtesy of the Defense Department)

They’re small, easily deployable and so quick that some of the best “60 Minutes” camera operators had a hard time keeping up with them.

The Pentagon’s Strategic Capabilities Office unveiled the Perdix micro-drone swarm to millions of television viewers Sunday night on CBS in what military officials called “one of the most significant tests of autonomous systems under development,” according to a statement Monday.

Three F/A-18 Super Hornets dropped a swarm of 103 of the Perdix drones, which share “one distributed brain for decision-making,” SCO director William Roper said in the statement.

Each of the drones, now in their sixth generation of development, weigh less than a pound, with a body measuring just over six inches.

The Pentagon released a video in March to the Washington Post of a single drone deployment, but the footage obtained at China Lake, Calif., by the CBS crew in October displayed the swarm’s flight pattern changes and autonomous communications.

“Controlling 100 drones individually would be overwhelming, so much like a sport coach, operators call 'plays' … and Perdix decides how best to run them,” a Pentagon fact sheet says.

The drones each have radios and send messages to one another many times per second that report what they’re doing and where they are, Roper told 60 minutes.

Perdix swarms fly at speeds greater than 68 mph and can be launched to collect low-altitude intelligence from the ground, air and at sea.

Unlike most drones in operation, these are relatively inexpensive. Losing a few out of a swarm would be unlikely to compromise a mission.

“Because every Perdix communicates and collaborates with every other Perdix, the swarm has no leader and can gracefully adapt to drones entering or exiting the team,” Roper said in the Monday statement.

In a behind-the-scenes look at the story, “60 Minutes” said its regular news cameras couldn’t film the drones’ because of their size and rapid course changes. They brought in an experienced golf cameraman — and he was quickly humbled, which nearly prompted “60 Minutes” to scrap the story altogether.

The news program went on to acquire a new 4K, server-connected camera capable of shooting 480 frames per second, then slowed the images down to capture the footage.