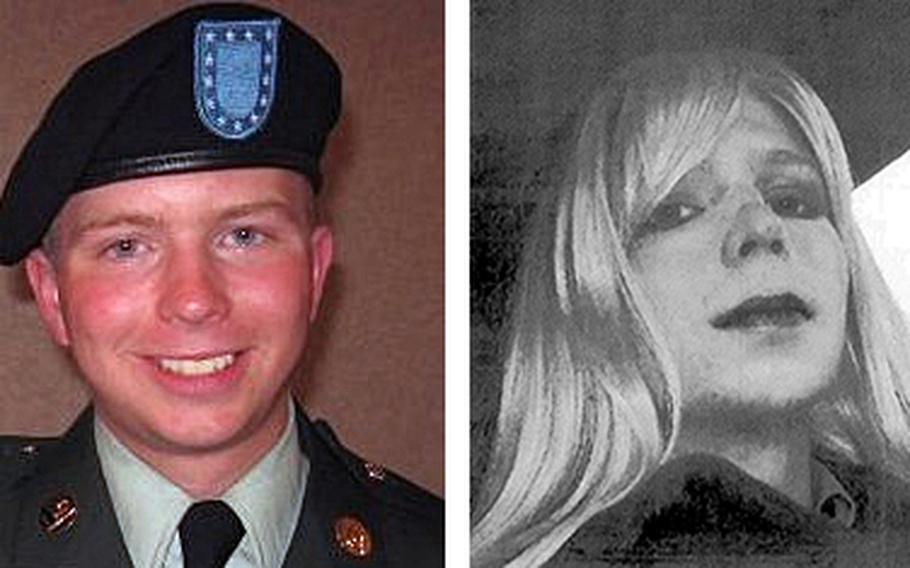 Former Army Pfc. Bradley Manning whose name was changed to Chelsea Manning and who was granted permission to undergo hormone therapy while serving time at the military prison at Fort Leavenworth, Kansas, is seen in uniform and dressed as a female. (U.S. Army)

WASHINGTON — The Pentagon will provide sex-change operations to some active-duty transgender servicemembers if a military doctor determines that surgery is required to treat the individual’s gender dysphoria, a Defense Department spokesman said Tuesday.

The department will begin providing transgender servicemembers on active duty all “medically necessary” treatment starting Oct. 1, said Air Force Maj. Ben Sakrisson, the Pentagon spokesman. Treatment could include behavioral health care, hormone therapy, and in some cases gender reassignment surgery. Servicemembers must be diagnosed as stable in their preferred gender for 18 months before they can receive treatment.

“The Secretary of Defense has made clear that servicemembers with a diagnosis from a military medical provider indicating that gender transition is medically necessary will be provided medical care and treatment for the diagnosed medical condition,” Sakrisson said.

Defense Secretary Ash Carter on June 30 repealed the longstanding ban on transgender men and women serving openly in the U.S. military, but he gave the services one year to determine and implement many of the changes that would be necessary for transgender servicemembers – ranging from policies on communal shower facilities to physical fitness standards.

It remained unclear at the time whether the Pentagon would consider gender-reassignment surgery “medically necessary” or an elective, cosmetic surgery, a defense official said. The Defense Department will not pay for any such surgeries not required for medical reasons.

Transgender servicemembers who are approved for sex-change surgery will be treated at either a military hospital or a private hospital through Tricare, if there is not a qualified provider at the military facility, Sakrisson said. Surgeries, and all other care, will be funded through the Defense Health Program appropriation.

The department’s announcement of its determination came just days after lawyers representing imprisoned Army Pvt. Chelsea Manning said the Army had agreed to provide her gender-reassignment surgery. Manning, who is serving a 35-year sentence in the Fort Leavenworth Disciplinary Barracks in Kansas for leaking classified and sensitive material to the website WikiLeaks, was recommended for the surgery by a doctor in April, according to her attorneys with the American Civil Liberties Union.

Manning, formerly known as Bradley, began a short-lived hunger strike Sept. 9 before the Army approved the surgery Sept. 13, according to the lawyers.

“I am unendingly relieved that the military is finally doing the right thing. I applaud them for that. This is all that I wanted — for them to let me be me,” Manning said in a statement.

The Pentagon will not provide gender-reassignment surgery to non-active duty Tricare beneficiaries, Sakrisson said. Those individuals, however, will be eligible for behavioral health care and hormone treatments beginning Oct. 3.

Estimates of the number of transgendered individuals serving in the military vary greatly, but most officials agree there are several thousand among the ranks. The RAND Corporation, which assisted the Pentagon in studying the issue, estimates there are between 4,000 and 12,000 transgender troops on active duty and in the reserves. The Palm Center, a research institute based in San Francisco, estimates there are about 15,500.

Pentagon officials have said they do not anticipate large numbers of transgender troops to qualify for surgery. They said the vast majority of transgender men and women are treated with hormone therapy.

The Pentagon expects to pay between $40,000 to $50,000 during the course of a servicemember’s life to treat gender dysphoria. The Pentagon is likely to spend between $2.4 to $8.4 million annually on the treatment, according to RAND.