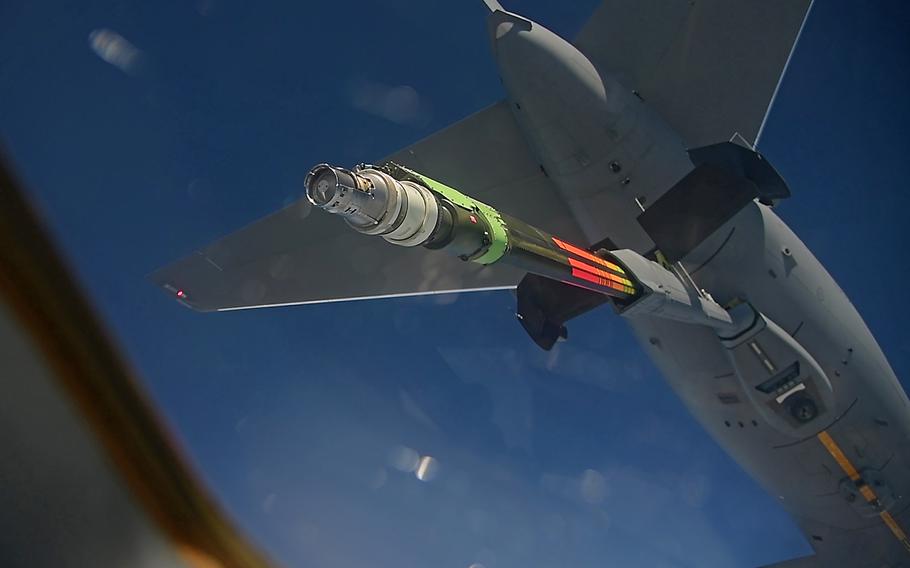 The Pentagon will investigate the Air Force's handling of the development of a remotely operated boom on its newest refueling tanker, which has been plagued by a host of problems.

The Defense Department’s Inspector General is expected to begin evaluating “whether the Air Force adhered to DOD and Air Force systems engineering processes” during the design and development of the refueling boom on the new Boeing KC-46A Pegasus, the IG’s office said in a statement last week.

The IG investigation will center on Ohio’s Wright-Patterson Air Force Base but could expand to other locations, the IG said in a memo to the Air Force Auditor General.

Four serious technical flaws have been found in the tanker, including two involving the boom: stiffness and problems with the remote vision system, which is used to guide the refueling arm.

The stiff boom problem could “affect operations and cause damage to stealth aircraft” when the tanker is refueling the newer generation air frames, making them visible to radar, the Government Accountability Office said in a June report.

“The stiff boom deficiency is currently under contract with Boeing to implement a viable fix,” Gen. Maryanne Miller, head of Air Mobility Command, said last week at the Air Force Association’s Air, Space and Cyber conference in Fort Washington, Md. “This needs to be and remain a priority.”

“The solution Boeing presents must meet all these parameters,” Miller said. “This is a pass-fail requirement. As the air component commander to U.S. [Transportation Command], I can accept nothing less in support to the Joint and coalition warfighter.”

The Air Force’s portion of work to fix the tanker’s flaws is expected to take years and cost more than $300 million, the GAO said.

The tanker aircraft is unlikely to deploy to a combat zone for at least three years, Miller told reporters at the conference last week. The KC-10 Extender and KC-135 Stratotanker aircraft may have to keep flying to fill the gap until then, she said.

“I have to keep booms in the air,” she said.

The Air Force has banned cargo and passengers aboard the Pegasus after floor cargo restraints unlocked during recent test flights. The issue could cause cargo aboard the plane to become loose, potentially endangering individuals and damaging weapons system, the AMC said this month.

The Pegasus is the Air Force’s choice to replace the more than 50-year-old KC-135 Stratotanker.

Boeing delivered its first KC-46A to the Air Force in January after considerable delays. The program, which aims to build 179 aircraft by 2027, was initially supposed to deliver aircraft by 2016.

The KC-46A is a 165-foot tanker plane built on Boeing’s 767 platform that can carry some 210,000 pounds of fuel and is capable of refueling every aircraft in the Pentagon’s inventory able to do so, according to Boeing. It is capable of flying about 650 mph and it requires a crew of 15 airmen.