Buy Photo
A Ukrainian BM-21 Grad Multiple Rocket Launcher fires a rocket during a training exercise with the Joint Multinational Training Group-Ukraine, in Yavoriv, Ukraine, June 30, 2017. The Pentagon has earmarked $250 million in aid for Ukraine, whose forces are battling Russian-backed separatists. (Stars and Stripes)

Buy Photo
A Ukrainian BM-21 Grad Multiple Rocket Launcher fires a rocket during a training exercise with the Joint Multinational Training Group-Ukraine, in Yavoriv, Ukraine, June 30, 2017. The Pentagon has earmarked $250 million in aid for Ukraine, whose forces are battling Russian-backed separatists. (Stars and Stripes) 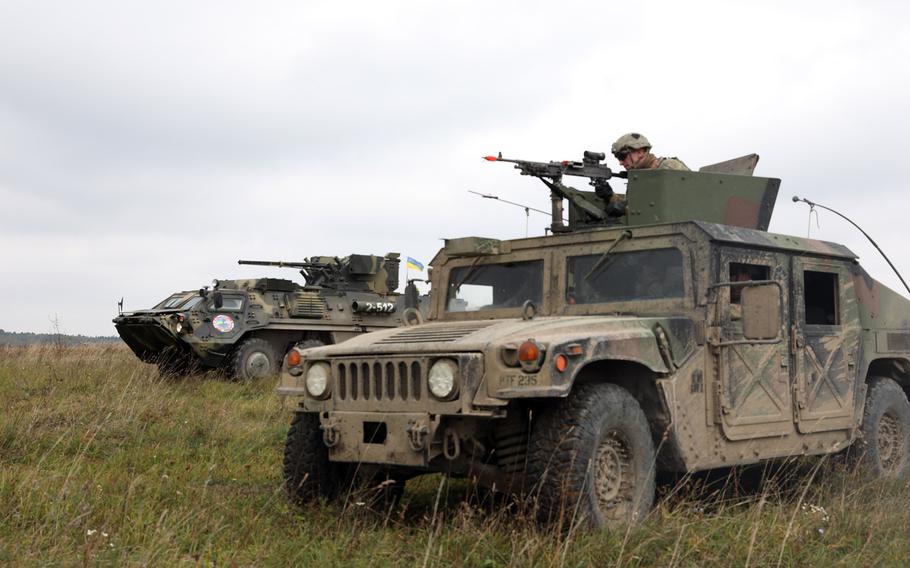 A firing squad from the 101st Airborne Infantry Division, in a Humvee, right, and a Ukrainian armored military vehicle from the 10th Mountain Assault Brigade prepare to engage targets during Rapid Trident 2019 in Yavoriv, Ukraine, Sept. 26, 2019. The Pentagon has earmarked $250 million to aid Ukraine, whose forces are battling Russian-backed separatists. Kyle Larsen/U.S. Army (Kyle Larsen/U.S. Army)

The Pentagon will provide $250 million in military assistance to Ukraine during the next fiscal year to strengthen its capacity to counter Russian aggression, it said Thursday.

The funds, given through the Ukraine Security Assistance Initiative, are earmarked for additional training, equipment and advisory efforts for Ukraine’s security forces, the Pentagon said in a statement.

“This reaffirms the long-standing defense relationship between the United States and Ukraine — a critical partner on the front line of strategic competition with Russia,” it said.

Half of the sum will be contingent on Ukraine making more progress in defense reforms, including strengthening civilian control of the military, increasing transparency and competition in weapons procurement and the defense industrial sector, and bolstering internal controls to reduce corruption, the statement said.

The aid package was announced weeks after the Defense Department notified Congress about plans to provide Ukraine with equipment including mobile battlefield radar systems, ambulances, secure communications equipment, and patrol boats armed with 30 mm autocannons for service in the Black Sea, where Russia has a clear advantage over Ukraine’s navy.

Russia seized and annexed Ukraine’s Crimean Peninsula in 2014, and Kiev continues to battle Russian-backed separatists in the east of the country where about 4,000 Ukrainian troops have been killed.

The funds would help strengthen Ukrainian combat capabilities and save lives, the Ukrainian Defense Ministry said in a statement. The ministry and the country’s armed forces “are sincerely grateful” to their American partners, it said.

In the past, the U.S. has provided lethal military equipment to Ukraine’s military, including anti-tank Javelin missiles, sniper rifles, grenade launchers and counterartillery radars.