Pentagon to establish a space command, eyes Space Force by 2020 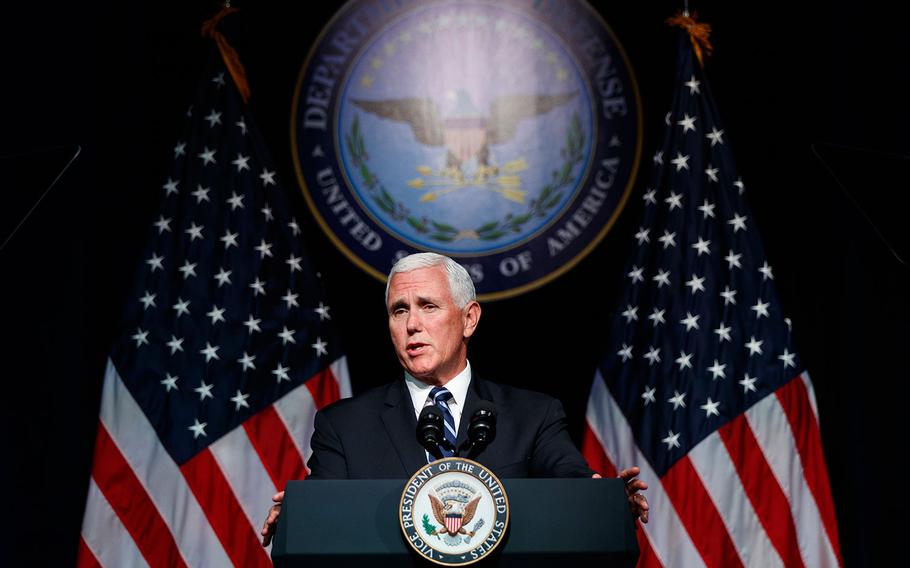 Vice President Mike Pence speaks during an event on the creation of a United States Space Force, Thursday, Aug. 9, 2018 at the Pentagon. (Evan Vucci/AP)

Vice President Mike Pence speaks during an event on the creation of a United States Space Force, Thursday, Aug. 9, 2018 at the Pentagon. (Evan Vucci/AP) Secretary of Defense Jim Mattis introduces Vice President Mike Pence during an event on the creation of a United States Space Force, Thursday, Aug. 9, 2018 at the Pentagon. (Evan Vucci/AP) 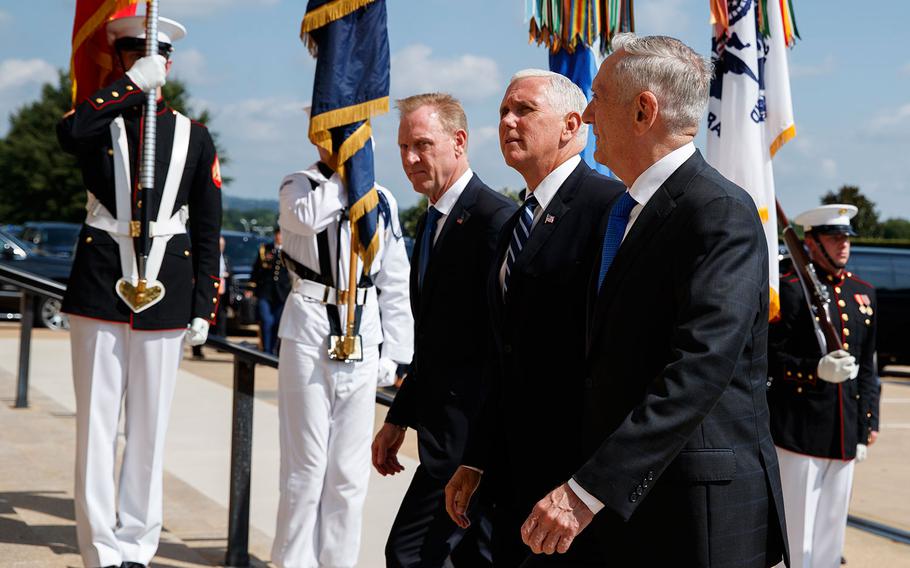 The new Space Force would defend America’s satellite systems in outer space at a time when adversaries, including Russia and China, have worked to develop technology aimed at disabling or jamming them, Pence said during a speech at the Pentagon at the same time the Defense Department released a study of its space operations. The establishment of a Space Force would require congressional approval, and Pence said President Donald Trump’s administration would request funding for it in its next budget proposal due in February.

“The time has come to establish the United States Space Force,” Pence said to a Pentagon audience filled with uniformed military and civilian leaders. He added later: “Our adversaries have transformed space into a warfighting domain already and the United States will not shrink from this challenge.”

Top Pentagon leaders for years have spoken with urgency about the need to invest heavily in defense of American outer space systems, especially as China has recently displayed the ability to hit satellites with missiles and Russia has vowed to develop space-based laser weaponry. But the establishment of a new military service for space operations is a more recent development, first suggested last year by several members of Congress who pitched it as a service that the Air Force would oversee, similar to how the Navy oversees the Marine Corps. In recent months, however, Trump has championed the Space Force idea, demanding publicly in June that the Pentagon prepare to establish a new space service, which would be “separate but equal” from the Air Force.

However, some officials in the Defense Department had pushed back against the establishment of a new military service including Air Force Secretary Heather Wilson and Defense Secretary Jim Mattis, who last year wrote to Sen. John McCain, R-Ariz., chairman of the Senate Armed Services Committee, that establishing a new service would add ”additional organizational layers at a time when we are focused on reducing overhead and integrating joint warfighting functions.”

On Thursday, Mattis appeared to embrace the creation of a new service overseeing space operations, which he called “one of our vital national interests.”

The Pentagon proposal would pull the bulk of space operations from the Air Force, which has overseen most of the Defense Department’s space capabilities for some 35 years. The Air Force operates 77 of the U.S. military’s more than 100 satellites.

Pence said the new Space Force would pull servicemembers at first from the existing services – primarily the Air Force, but all five branches have some space programs. He said the White House would request $8 billion during the next five years for space security programs that would be overseen eventually by the Space Force.

Neither Pence nor the Pentagon report indicated precisely how much money establishing the new service would cost taxpayers.

In the Defense Department space report provided to Congress on Thursday, the Pentagon announced it would take a series of unilateral steps to prepare for the establishment of the service, the first new military branch since the Air Force was established in 1947.

By the end of 2018, the Pentagon will establish a new four-star combatant command, U.S. Space Command, to oversee all of the U.S. military’s space-related operations, according to the 15-page report. The command would be led by a four-star general and would be akin to other top-level commands such as U.S. Central Command, U.S. Special Operations Command or U.S. Strategic Command, which oversees space operations now.

The Defense Department will also establish a Space Development Agency, tasked with rapidly building and deploying new technology into space outside the bureaucratic confines of the Pentagon’s normal acquisition system.

The Pentagon is also to establish a new civilian leadership position to oversee implementation of the changes to space operations, Pence said. The person, the assistant secretary of defense for space, will report directly to the defense secretary and pave the way eventually to establishment of the secretary of the Space Force.

“Creating a new branch of the military is not a simple process,” Pence said. “There must be someone in charge who can execute, hold others accountable and be responsible for the results.”

Rogers and Cooper, the original pioneers of a “Space Corps” plan that Trump’s proposal seems to mirror, said they have been warning for years of the need to protect U.S. space assets and develop more capable space systems.

The Defense Department’s report on an organizational management structure for a new space command was required by last year’s National Defense Authorization Act and will help speed up related acquisitions, they noted. They also said Shanahan has played a key role in the progress towards a new space command.

“We are glad that the Pentagon is finally taking these steps in enhancing our space strength,” Rogers and Cooper said Thursday in a joint statement. “This report is a step in a multiyear process that we think will result in a safer, stronger America. We… look forward to the establishment of a much-needed independent Space Force, as called for by President Trump.”