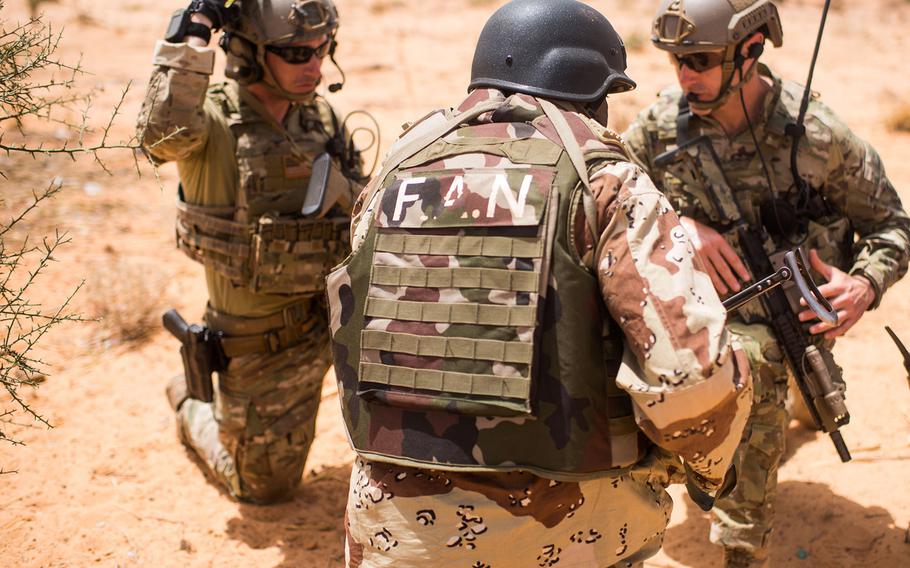 Nigerien Armed Forces train with 20th Special Forces Group during Flintlock 18 in Niger, Africa on April 16, 2018. The Pentagon has decided to cut about 700 troops in Africa because of other priorities. (Jeremiah Runser/U.S. Army)

STUTTGART, Germany — The Pentagon said it will cut about 10 percent of its force in Africa, with most reductions focused on slashing the numbers of troops providing tactical help to local soldiers in the western part of the continent.

The decision, which comes one year after four U.S. soldiers were killed in a counterterrorism mission gone awry in Niger, means U.S. Africa Command will rely more on intelligence and surveillance operations in the region.

The U.S. has about 7,200 troops operating in Africa. The coming reductions, about 700 in all, will happen over the course of the “next several years” the Pentagon said Thursday.

The change in strategy “preserves the majority of U.S. security cooperation partnerships and programs in Africa to strengthen partner networks, enhance partner capability and support ongoing programs,” the statement said.

Counterterrorism missions based out of Somalia, Djibouti and Libya will largely remain unchanged, it said. In western Africa, the “emphasis shifts from tactical assistance to advising, assisting, liaising, and sharing intelligence.”

The U.S. is developing a new drone base in Niger that is expected to give a boost to surveillance capabilities stretching into Mali and Libya, which could reduce the need for ground troops. Earlier this year, the U.S. also was given permission to conduct armed drone flights out of Niger.

So far, no air strikes have been launched in either Niger or Mali, AFRICOM said Friday.

AFRICOM’s new drone site in Agadez, Niger, is expected to be operational by mid-2019.

Counterterrorism operations in Somalia have been the main effort for AFRICOM during the past year. Dozens of airstrikes have been launched in the country and U.S. special operations forces serve as advisers to government troops in their battle against Islamic militants.

In Western Africa, the military mission also has grown during the past two years. However, last year’s deadly ambush in Niger, launched by militants against a U.S. special operations team, brought scrutiny to the mission and raised questions about whether U.S. troops were taking unnecessary risks in the that area.

An AFRICOM investigation found that special operations forces serving as advisers to Nigerien troops were poorly trained for their mission. Several troops were issued reprimands in the wake of the ambush, including U.S. Special Operations Command Africa boss Maj. Gen. Marcus Hicks, who was faulted for insufficient oversight of his subordinate officers.

While there are various Islamic militant groups that operate in and around Niger, military officials have acknowledged none currently pose a direct threat to the U.S.

The coming force reduction in Africa also comes as the Pentagon moves forward with a new strategy focused on “great power competition,” which emphasizes countering Russia and China, and places less importance on countering obscure terrorist groups in remote corners of Africa.