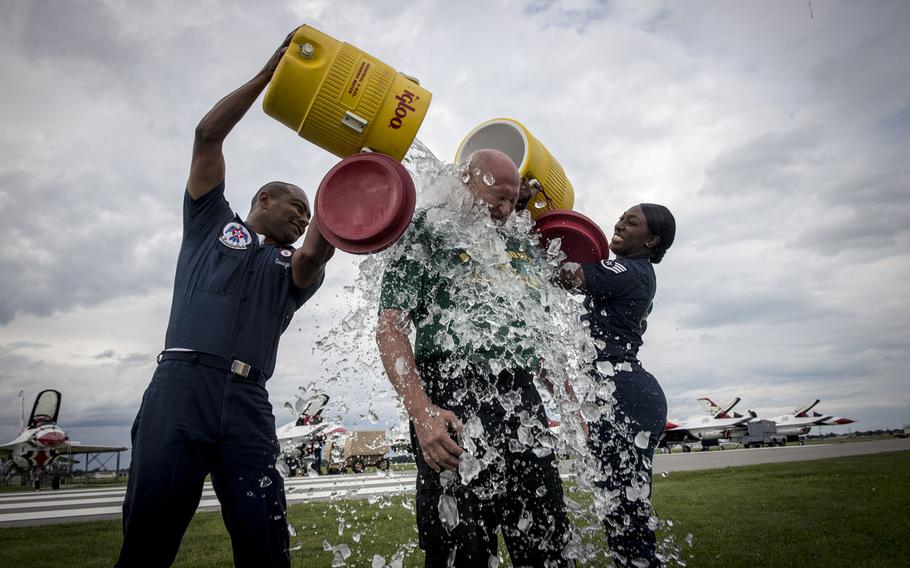 The Pentagon has dumped a bucket of cold water on servicemembers who want to take the ALS ice bucket challenge while in uniform.

The stunt has become popular in recent weeks as a way of raising awareness and millions of research dollars for amyotrophic lateral sclerosis, commonly known as ALS or Lou Gehrig’s disease. Participants in the challenge dump a bucket of ice water over their heads and challenge friends to do the same or donate $100 to the ALS Association. Many people donate even after getting doused.

An Army spokeswoman, asked to clarify the service’s position on the trend, cited the Defense Department’s Office of General Counsel Standards of Conduct Office. She said uniforms and civilian clothes “clearly showing an Army relationship” cannot by worn by employees performing the challenge and posting a video online. A soldier also can’t give his Army affiliation aloud or his rank, the spokeswoman, Tatjana Christian, wrote in an email.

“ALS Association is a national non-profit organization,” Christian wrote. “As such, participating in this event is subject to concerns about implied endorsement.”

The popular stunt has swept Facebook and social media in recent weeks, raising awareness and millions of dollars to fight the disease.

An Aug. 1 Facebook post by Peter Frates, who has ALS, is credited with making the challenge viral; the original video dates back to June. Other Facebook users picked up on the challenge before it caught on with celebrities and politicians.

Servicemembers have also joined along. The Navy football team and coaches took ice baths last Friday while wearing Navy football T-shirts. Members of the Navy Blue Angels got soaked in their flight suits on Saturday. The Air Force football coach took the challenge in a jersey on Monday.

Two uniformed midshipmen dumped ice buckets on the superintendent and commandant of the U.S. Naval Academy in Annapolis, who then called out other service academy leaders to take the challenge. Lt. Gen. Robert L. Caslen, superintendent at West Point, appeared to have accepted the challenge, with several other officers and senior enlisted, according to the details of a YouTube video posted by West Point.

That video was removed two days ago, soon after it was posted.