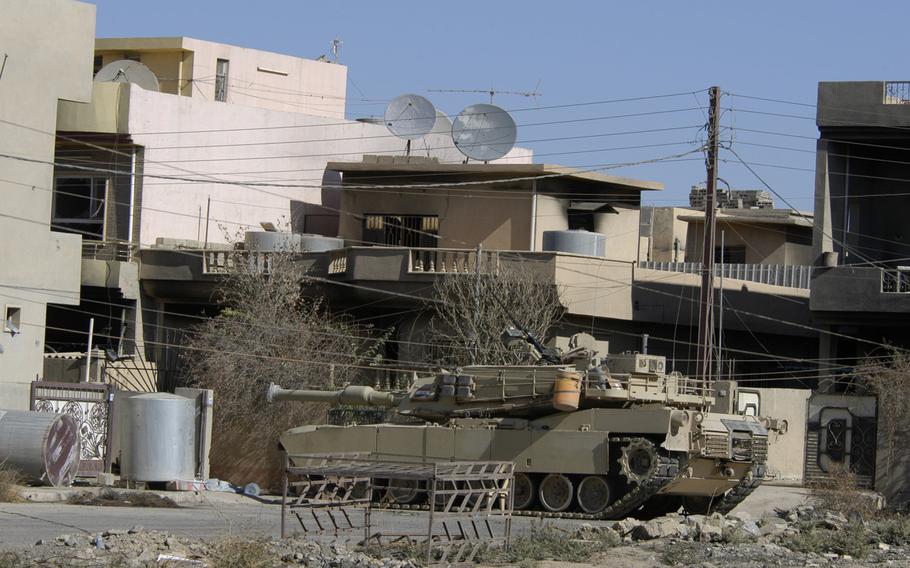 Buy Photo
An Abrams tank with the Iraqi army's 9th Armored Division is situated near Mosul on Thursday, Nov. 3, 2016. The division entered the city limits briefly on Wednesday but later withdrew and were returning on Thursday, according to a general with the division. (Seth Robson/Stars and Stripes)

WASHINGTON – The Pentagon will likely have to decide in the coming days whether American troops will enter Mosul, as Iraqi forces near the Islamic State-held city from the south and push into its eastern-most neighborhoods.

“We’ve had forces provide advice and assistance, and in some cases accompany, Iraqi security forces, Kurdish peshmerga and [Counter Terrorism Service troops] up to this point,” Pentagon Press Secretary Peter Cook told reporters Monday at the Pentagon. “And a decision going forward as to how much farther (American troops) go will be something determined by commanders working with the Iraqis.”

The vast majority of the nearly 5,000 American troops serving in Iraq remain on bases far from Mosul, where they are training Iraqi forces. But the United States has the authority to embed military troops into Iraqi and peshmerga battalions and brigades.

Iraqi forces have pushed into neighborhoods in eastern Mosul without the American advisers who have accompanied them through the early weeks of the campaign to retake the militant group’s last stronghold in the country, according to the Pentagon.

But the Pentagon remains open to American troops entering the city to support Iraqi forces on the ground if Iraq’s government approves it and the top U.S. commander in Iraq, Army Lt. Gen. Stephen Townsend, deems it necessary, Cook said.

Stars and Stripes reporters have observed U.S. troops near the front lines south of Mosul, including with the Counter Terrorism Service forces that have spearheaded the push toward the city.

U.S. troops are mostly embedded with headquarters units that move forward behind the front line of fighting. U.S. officials have said the American troops are not there in a combat role. Their job is to provide on-the-spot tactical advice, intelligence assessments and to coordinate coalition airstrikes and close-air support for the Iraqi forces.

Cook said Iraqi troops cleared the last major village south of the city, Hamam al-Alil, on Monday, pushing within about 15 miles of Mosul along the Tigris River.

The operation has already proven deadly for Iraqi and American troops. The Iraqi government has not released casualty data for the operation, but local news reports estimate hundreds of anti-Islamic State troops have been killed or injured. One American servicemember, Navy Chief Petty Officer Jason C. Finan, was killed by a roadside bomb on Oct. 19.