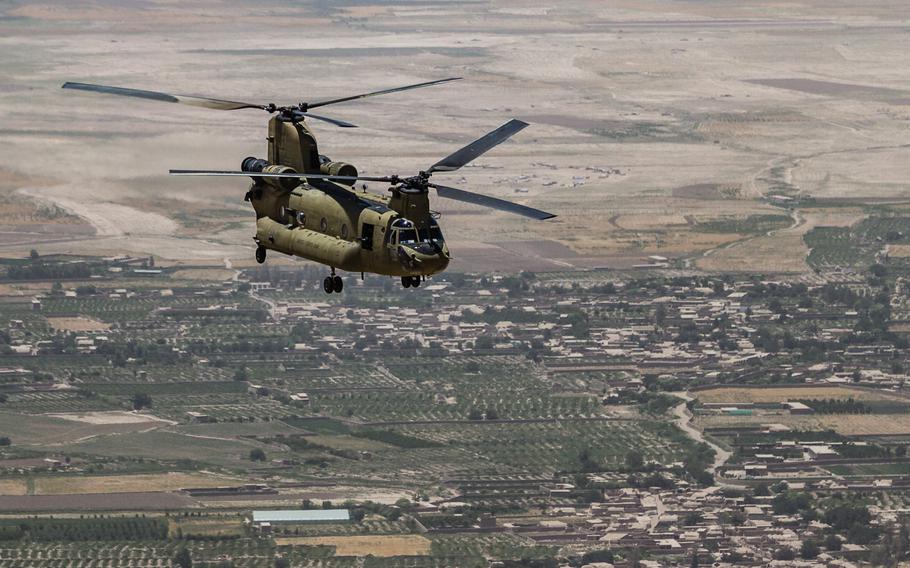 The Defense Department plans to provide 20 Boeing CH-47 Chinook helicopters to Afghanistan’s security forces in a bid to save on support costs and air crew requirements, Pentagon officials said in a briefing that provides new details on the program.

The two-page document issued Monday came in response to questions Sen. Richard Blumenthal raised in a letter last month to Defense Undersecretary John C. Rood about what he saw as an “abrupt change” to the helicopters being fielded to America’s Afghan allies.

Blumenthal, who sits on the Senate Armed Services Committee, was concerned about the change and what he called its “unclear strategic justification.”

The Connecticut Democrat had previously pushed DOD to provide Afghan forces with UH-60 Black Hawks, made in his state by Sikorsky Aircraft Corp., after sanctions barred the U.S. from buying Russian spare parts to keep the Mi-17s flying.

The U.S. began supplying Kabul with the first of a planned 159 UH-60s in the fall of 2017, but last month said it was capping that total at 53. Plans to send Chinooks instead were revealed in a DOD report to Congress last month, though the Pentagon declined at the time to say how many.

The American-made Chinooks are expected to be 10-15% cheaper to maintain but 30% more capable than the Russian helicopters, while giving the special operations air wing “a medium-lift platform that fully meets its requirements for conducting its combat mission.”

The twin-rotor Chinook, which can carry about three times the number of troops as a Black Hawk, fulfills the special operations unit’s requirement for conducting air assaults, the Pentagon said.

None of the Chinooks are being provided to the conventional air force, officials said. Conventional units will use Black Hawks, mainly for air movement, resupply and casualty evacuation, and the Special Mission Wing will get some for “utility missions.”

The switch is also expected to trim about two-thirds of the projected $683 million annual cost of sustaining the Special Mission Wing’s Black Hawks, and reduces the number of aircraft needed to meet Afghan requirements.

That also means fewer air crews are needed than would be for either Mi-17s or UH-60s, the Pentagon said. The U.S. has struggled to train pilots and crews, but efforts are now on track to train “sufficient numbers,” DOD told Blumenthal.

In its brief to Blumenthal’s staff, the Pentagon said the changes were due to a review conducted in 2019 that found Afghan requirements could be met with fewer UH-60s.

That decision was based on improvements in the Afghan air force’s use of existing ground-attack aircraft the U.S. has provided since 2016, to include 93 MD-530 helicopters with weapons pods and 40 fixed-wing A-29 light attack planes.