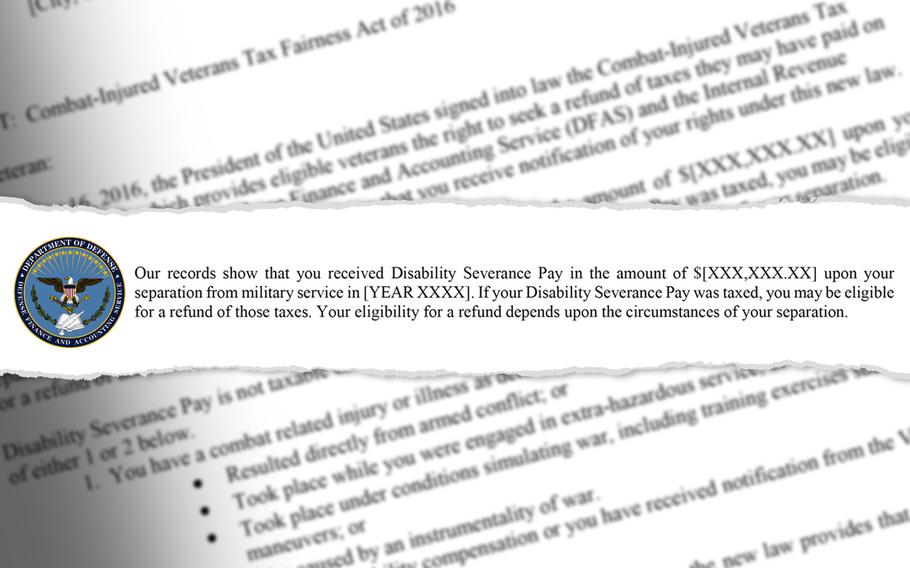 Buy Photo
Letters were sent this month by the IRS notifying 130,062 veterans that the federal agency might have improperly collected taxes on their lump sum disability severance pay issued between 1991 and 2016. The National Veterans Legal Services Program estimates some veterans are owed more than $10,000. (Stars and Stripes)

WASHINGTON — The Defense Department has identified more than 130,000 veterans released from military service following injuries who may be owed more than $1,700 each in tax refunds after the Pentagon incorrectly withheld money from their disability pay, officials said Monday.

Letters were sent this month by the IRS notifying 130,062 veterans that the federal agency might have improperly collected taxes on their lump sum disability severance pay issued between 1991 and 2016, said Army Lt. Col. David Dulaney, the executive director of the Armed Forces Tax Council. Veterans who were sent the letter, which should arrive in the coming weeks, will have one year from the letter’s date to file their amended tax refund claim.

The letters are being sent as the Pentagon’s response to the Combat Injured Veterans Tax Fairness Act of 2016, which required the Defense Department to identify and notify veterans about the error. The problem was first discovered by The National Veterans Legal Services Program, a nonprofit veterans service organization.

That organization has said a computer glitch in the Pentagon’s accounting system is to blame for the error. It estimated some $78 million was owed to former servicemembers.

However, Dulaney said Monday that he did not have an estimate for how much money was owed.

Under federal law, disability severance pay cannot be taxed if an individual’s injury or illness was determined to have resulted from armed conflict, during extra-hazardous service, during war simulations, was caused by a weapon, or if the individual is receiving disability pay from the Department of Veterans Affairs.

Veterans who receive notification will have options for how to obtain the money that they are owed, Dulaney said.

They can apply for a standard refund amount approved by the IRS or they can submit a claim to the IRS for the actual amount of money withheld, he said.

To receive the standard refund, veterans must mail a completed IRS Form 1040X, write “Veteran Disability Severance” or “St. Clair Claim” at the top of the form and include the letter that they receive with it, Dulaney said.

To receive compensation for the total amount of money withheld, veterans must also submit documentation including past tax refunds proving the amount of taxes improperly withheld, Dulaney said.

It is possible the standard refund is either larger or smaller than the actual amount of money that the veterans overpaid, Dulaney said. But he did not know how the IRS arrived at the standard refund amounts. The IRS did not immediately respond Monday to requests for comment.

The National Veterans Legal Services Program estimates some veterans are owed more than $10,000.

Dulaney said it was possible some veterans outside of the ones receiving letters are also owed tax refunds for money improperly withheld. He referred people who believe they are owed money to the Defense Finance and Accounting Service and the IRS websites.