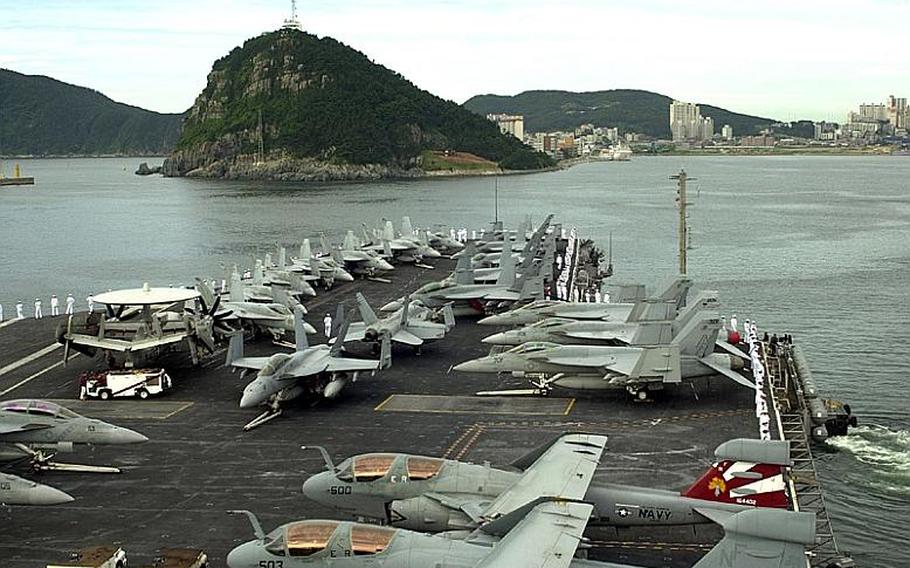 In this file photo, the USS George Washington pulls away from Busan in South Korea in July 2010 on its way to participate in the Invincible Spirit joint military exercise carried out for four days by the U.S. and South Korea. The George Washington operates out of Yokosuka Naval Base, Japan. (Jon Rabiroff/Stars and Stripes)

CAMP RED CLOUD, South Korea &mdash; The USS George Washington will participate in a joint U.S.-South Korean military exercise in the Yellow Sea in the near future, despite China&rsquo;s opposition to the aircraft carrier operating near its eastern waters.

Pentagon spokesman Geoff Morrell said Thursday the Japan-based nuclear-powered carrier will participate in the exercises but did not provide the dates.

Ships will exercise in the Yellow Sea and Sea of Japan, which Koreans call the West Sea and East Sea, respectively.

Morrell said the training will take place &ldquo;over the next several months&rdquo; and include anti-submarine, show-of-force and bombing exercises.

Last month, the George Washington took part in the four-day Invincible Spirit exercise that involved 20 ships and submarines, 200 aircraft and 8,000 servicemembers from the U.S. and South Korean militaries.

The exercise was carried out to send a message of strength and deterrence to North Korea as a response to the rogue nation&rsquo;s alleged role in the March 26 sinking of the South Korean patrol ship Cheonan and the deaths of 46 South Korean sailors in the Yellow Sea, near the disputed maritime border between the two Koreas.

Invincible Spirit, which planners initially considered conducting in the Yellow Sea, was staged instead in the Sea of Japan, a move seen by many as a U.S. effort not to upset China, widely considered North Korea&rsquo;s most important ally.

U.S. officials, however, dismissed that it was treading softly with China and stressed that the U.S. has in the past and will in the future stage exercises in the international waters of the Yellow Sea, despite China&rsquo;s concerns.

During a visit to South Korea last month, U.S. Defense Secretary Robert Gates said, &ldquo;These exercises are off the coast of Korea, not off the coast of China. There&rsquo;s nothing provocative about them at all.&rdquo;

On Thursday, South Korea started a five-day naval drill of its own in the Yellow Sea. Later this month, the U.S. and South Korea will participate in the 10-day Ulchi Freedom Guardian exercise &mdash; one of two joint exercises conducted every year.

Stars and Stripes reporter Jeff Schogol contributed to this report