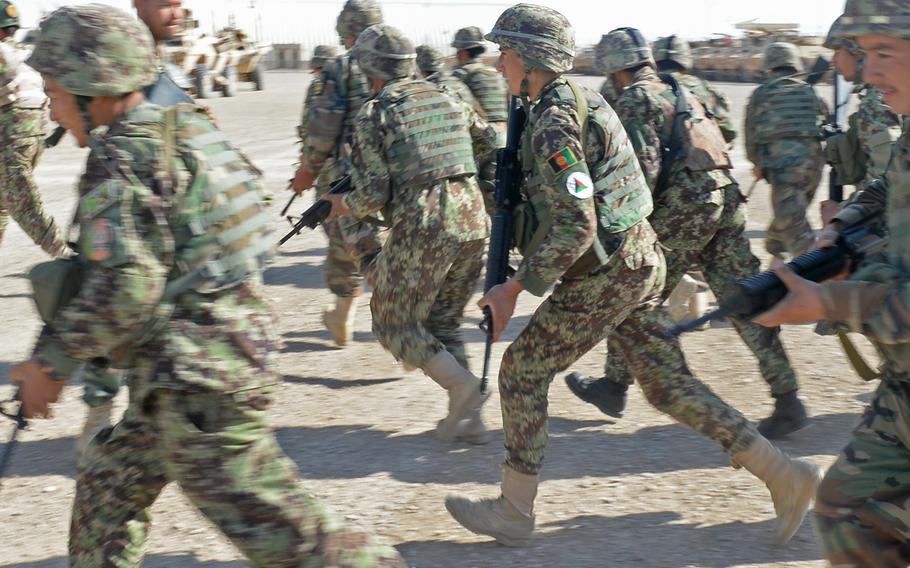 Afghan soldiers with the army's 215 Corps sprint to their Humvees and armored personnel carriers ahead of a patrol May 12, 2015 at Camp Shorabak in Helmand province. This is the first fighting season for the soldiers without coalition forces in the province. (Jad Sleiman/Stars and Stripes)

WASHINGTON — The Pentagon said Monday U.S.-backed Afghan security forces remain committed to the fight against the Taliban despite at least some units abandoning counterinsurgency patrols in Helmand province.

The Afghan National Army forces tasked with securing Helmand — a province where 900 coalition troops including many Marines died fighting during the war — now focus on supply runs and patrolling base perimeters while Taliban checkpoints and roadside bombs have become more common, Stars and Stripes reported Sunday.

The Afghan pullback to former coalition bases has coincided with an uptick in Taliban activity in Helmand. A medical technician at Camp Shorabak, the largest Afghan military base in Helmand, told Stars and Stripes that casualties in the area are up 50 percent from the same time last year.

But Pentagon spokesman Col. Steve Warren told reporters that the increased violence in Helmand is due to the start of the annual summer fighting season in Afghanistan rather than changes in tactics by the Afghans.

“The fact that attacks are on the rise should be no surprise to anyone,” Warren said. “It is the fighting season that began about a month ago.”

Personnel at the Shorabak base warned against traveling on roads in the province outside of busy morning hours due to Taliban checkpoints and improvised explosive devices.

Stars and Stripes reported that Afghan forces at Shorabak have pulled back from the foot patrols and sweeps of villages and that ANA troops stationed at checkpoints often do not venture out even when fired on from nearby villages.

On May 25, the Taliban attacked a nearby district police headquarters and killed 19 officers and seven soldiers

But an ANA commander in Helmand said the security situation there is actually much better this year.

“I think I would disagree with the premise that the Afghan security forces are not in this fight,” Warren said. “They are in this fight, they have been in this fight, and they will continue to work for Afghan peace.”

The U.S. has spent billions of dollars training and preparing Afghan forces to take over the fight against the Taliban — and now Islamic State-aligned fighters — when American forces leave next year. But the plans have been under pressure and criticism due to developments in Iraq.

The reports from Helmand come just a week after Defense Secretary Ash Carter criticized U.S.-backed security forces in Iraq for not having the will to fight in the war against the Islamic State.

After years of U.S. training and aid, Iraq forces lost large sections of the country’s north to the hardline group and fled the city of Ramadi in a stunning defeat earlier this month.