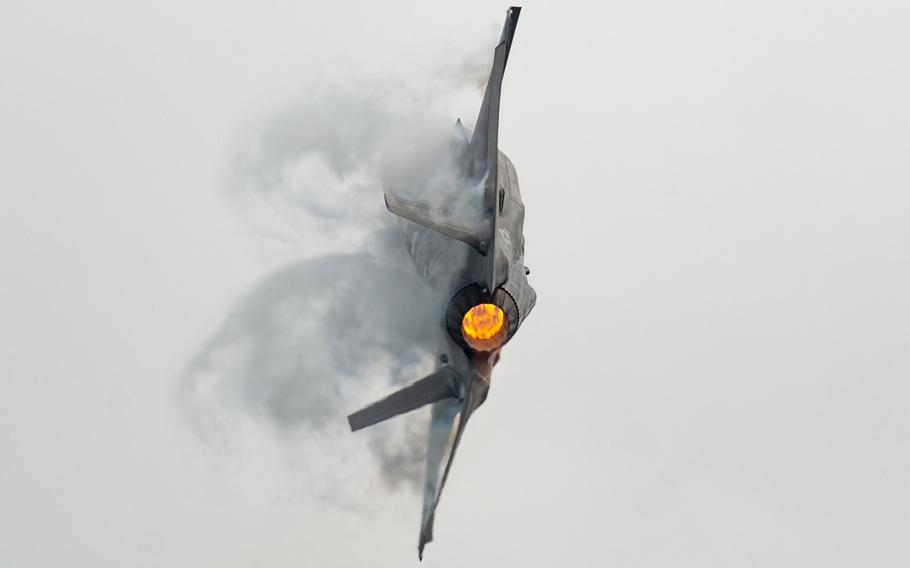 WASHINGTON – More than 80 percent of the U.S. military’s F-35 Lightning II fighters have returned to flying, Pentagon officials said Monday after a fleet-wide grounding last week to inspect the stealth jets for a problematic engine part at least partially blamed for a recent crash.

Within about two days, the military completed inspections of its entire operational fleet of F-35s, some 250 aircraft across the Air Force, Navy and Marine Corps, Pentagon officials said. It was not immediately clear how long jets found to have the bad part – a faulty engine fuel tube – would remain grounded, said Joe DellaVedova, a spokesman for the Pentagon’s F-35 Joint Program Office.

Some F-35 aircraft returned to flight status within hours of the ordered grounding, he said.

DellaVedova on Monday declined to provide exact number of F-35s that returned to flight status or had been found to have the flawed fuel tube, citing security concerns. He said some of all three variants of the planes – each service flies its own – were found to have the bad fuel tube.

But DellaVedova was clear Monday that the inspections ordered were a direct result of that investigation.

“The primary goal following any mishap is the prevention of future incidents,” he said in a statement. “We will take every measure to ensure safe operations while we deliver, sustain and modernize the F-35 for the warfighter and our defense partners.”

Inspectors believe the problem is isolated to the fuel tube, which is produced by Pratt & Whitney, an American aerospace manufacturer. The company is working quickly to produce enough replacement parts to minimize the time that the impacted jets are grounded, DellaVedova said.

The military had enough replacement fuel tubes in its stock to repair about one-half of the impacted planes, he said.

Among the jets that have already returned to flying are the Marine Corps’ F-35Bs aboard the USS Essex, an amphibious assault ship deployed in the U.S. Central Command area of operations, according to the Marines. Those aircraft on Sept. 27 became the first U.S. F-35s to be used in combat when they struck a Taliban target in Afghanistan.

The F-35 is the most expensive weapon in U.S. military history, but the program has been marred by delays and cost overruns and other mechanical issues. Problems have included a series of physiological episodes last year that forced the military to ground some of its F-35 fleet.

Ultimately, the F-35 is expected to cost the Pentagon about $406 billion for 2,456 fighter jets that the services intend to buy, according to the Joint Program Office.

The Marine Corps version is the most expensive of the three versions of the F-35, costing about $115.5 million each in 2019. The Marines’ version is capable of performing short-runway takeoffs and land vertically, like a helicopter. The Air Force’s version takes off traditionally and the Navy version is outfitted to fly from aircraft carriers.

The Air Force intends to purchase 1,763 F-35As, the Marine Corps intends to buy 353 F-35Bs and the Navy plans to buy 340 F-35Cs designed for deployment on aircraft carriers.

DellaVedova said the faulty fuel tube was not expected to impact deliveries for fiscal year 2019, which began Oct. 1.

“The program remains on track to meet its target of 91 aircraft [deliveries] for the year,” he said.