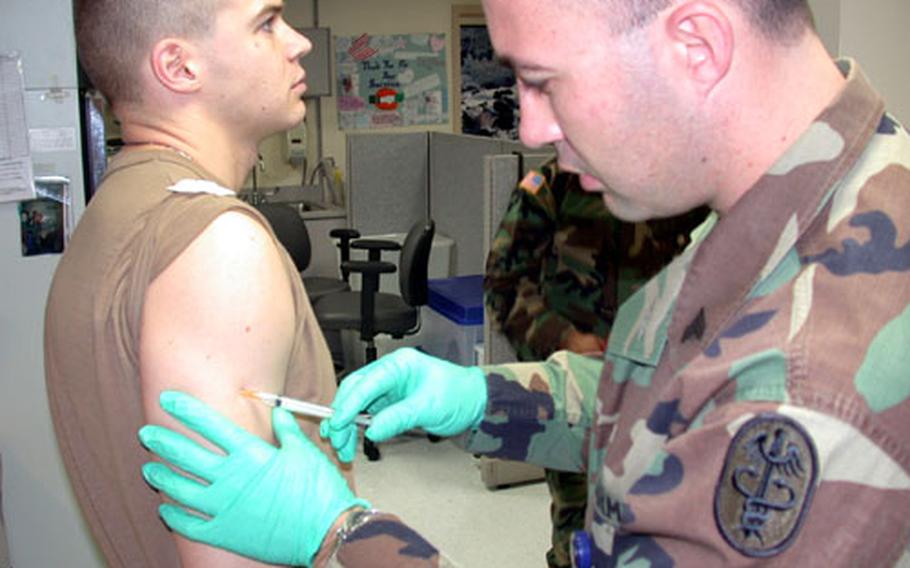 Sgt. Scott Johnson, 29, gives an anthrax vaccination booster shot to Sgt. Jeremy Stanton, 26, at the DiLorenzo Tricare Health Clinic at the Pentagon. All servicemembers have until Dec. 31 to get caught up on their anthrax vaccine shots. (Sandra Jontz / S&S)

ARLINGTON, Va. &#8212; Troops who received some of their anthrax inoculations before the Pentagon halted it 3 years ago have until Dec. 31 to resume their six-shot regimen, no matter where they might be stationed, officials said.

About 200,000 troops need to pick up the vaccination where they left off, even if it has been three years since their last shot, said Col. Steve Jones, director of the Military Vaccine Agency.

Commanders will be responsible for working with health care providers and troops to ensure shot records are up-to-date and that those who qualify get their shots, Jones said.

The controversial vaccination program is mandatory for all personnel deploying to areas Pentagon officials have deemed &#8220;high risk,&#8221; and for those who already started the process. The department will not inoculate those exempt for health reasons, though exempted personnel still are deployable.

For security reasons, Pentagon officials won&#8217;t publicly define the high-risk areas, or say how many doses are available.

Anthrax vaccines were suspended in June 2001 because of a lack of vaccine when the manufacturer, BioPort, changed its manufacturing process without FDA approval. The stoppage created a stockpile shortage for the military. When the program resumed in 2002, it first started with troops deploying to the high-risk areas. With supply no longer an issue, the program can expand to include other troops, Jones said.

This summer, the Pentagon expanded the vaccination program in two phases. In June, as a result of an increase in supply, the Pentagon started inoculating &#8220;tens of thousands&#8221; of U.S. troops in or heading to the Pacific Command and Central Command areas.

In July, the program resumed for troops who already had received a dose before the program&#8217;s halt, regardless if deployed to a combat zone or stationed in the United States, Jones said.

Stars and Stripes requested information from the Department of Defense after seeing reports on the matter.

Since the June 2002 resumption, the department has inoculated about 840,000 personnel. Since the program&#8217;s inception in 1998, more than 1.2 million people have been vaccinated, he said.

In spite of the lag, troops do not have to start over with the regimen, experts said.

&#8220;We&#8217;re following guidance from the CDC (Centers for Disease Control and Prevention) &#8230; on immunization practices and they recommend to one, stay on schedule as close as possible, and two, if you miss [a dose] it is not necessary to resume the entire sequence. Start where you left off,&#8221; Jones said.

However, the shots are unnecessary, said Dr. Meryl Nass, a physician at Mount Desert Island Hospital in Bar Harbor, Maine, and an anthrax and bioterrorism expert who has testified repeatedly before Congress as a vocal opponent to the program.

&#8220;We still feel the threat remains,&#8221; Jones said. &#8220;We do not see a change in the threat and we think it is important to continue to provide a layer of protection to our troops and vaccinations is one of the primary layers of protection we can provide them.&#8221;

The CDC is conducting studies to determine if the six-dose regimen can be lowered to four. It hopes to submit data to the FDA in early 2005 that could change the route of administration to intramuscular and reduce the dose schedule to five doses, with the full study to change to four doses and possibly biannual boosters in late 2007.