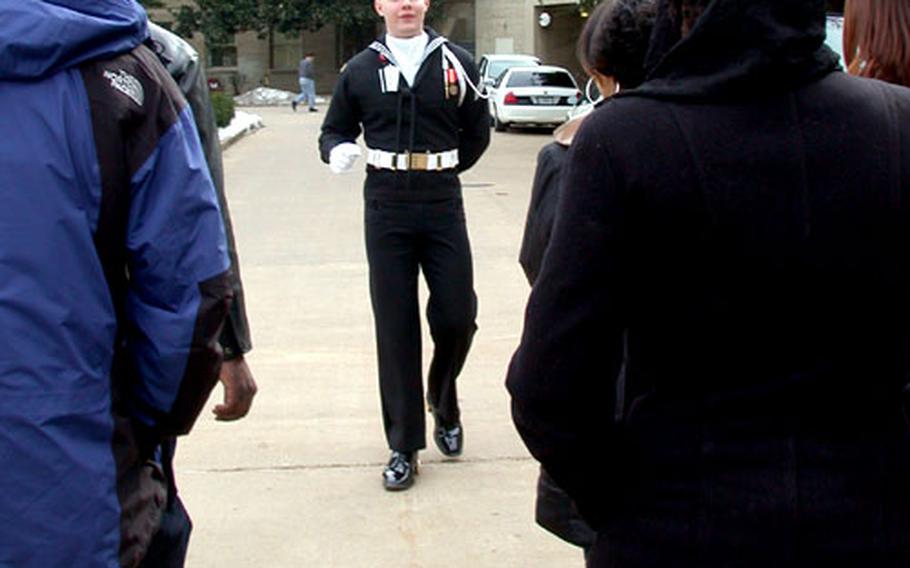 Ensuring guests can hear his narration, Seaman Austin Harnden walks backward for most of the tour that winds through 1.5 miles of hallways at the Pentagon in Arlington, Va. (Sandra Jontz / S&S)

Ensuring guests can hear his narration, Seaman Austin Harnden walks backward for most of the tour that winds through 1.5 miles of hallways at the Pentagon in Arlington, Va. (Sandra Jontz / S&S) 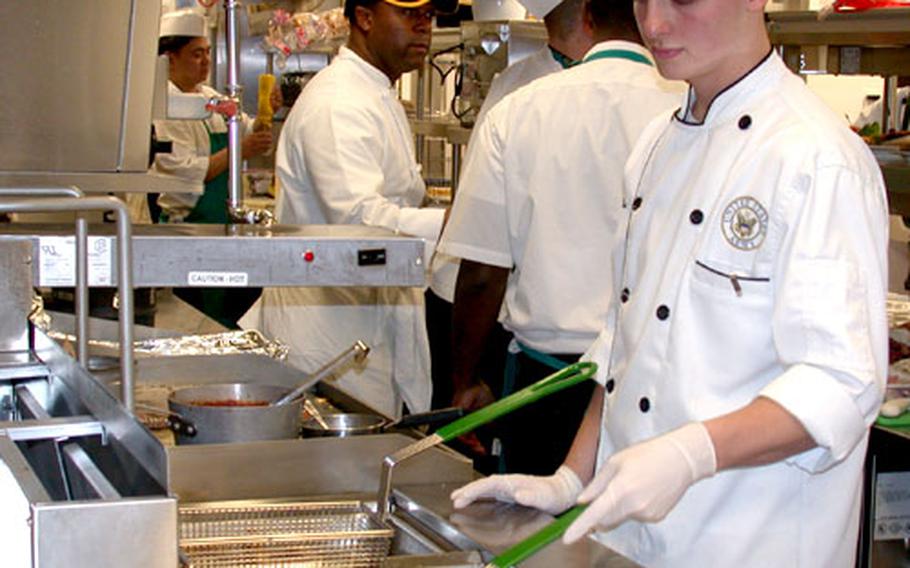 Pfc. Jacob Else, 19, is a cook assigned to the executive dining facility at the Pentagon, where he cooks for the service secretaries and their staffers. (Sandra Jontz / S&S) 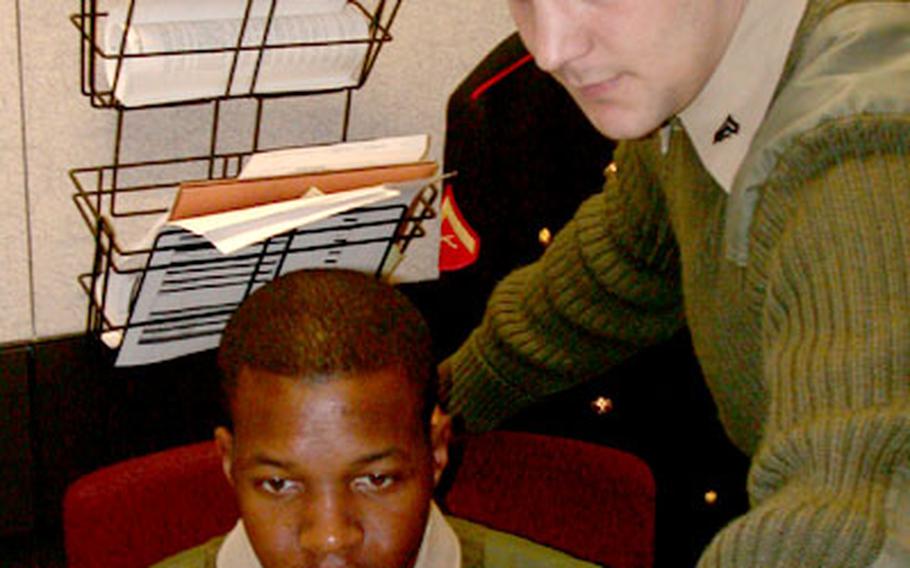 Cpl. Jonathan Brogdon, 23, leans over Pfc. Darrell Tucker, 18, to teach him some of the computer programs the younger Marine will need to do his job as an administrative clerk for the deputy commandant of Policy, Plans and Operations at the Pentagon. (Sandra Jontz / S&S) 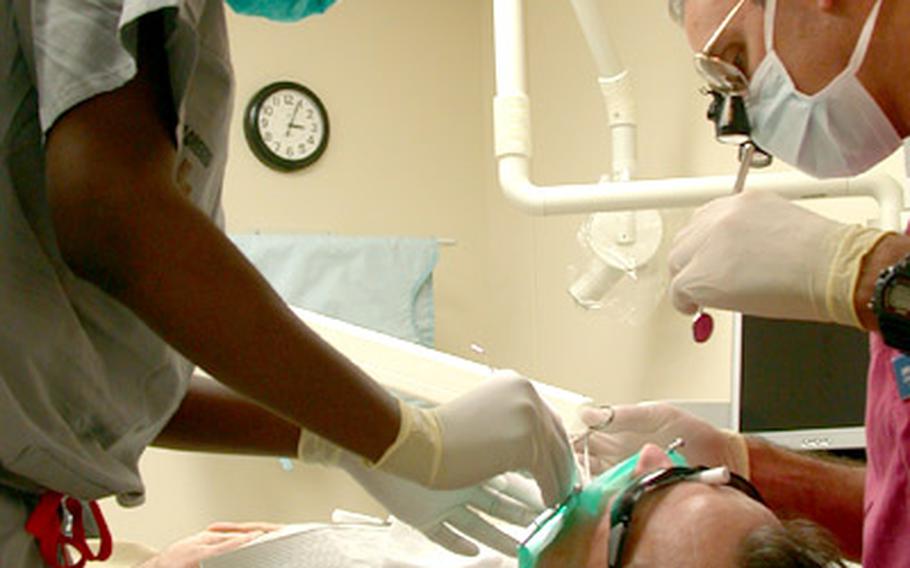 Airman Lotoya Barnaby helps Dr. (Capt.) Chuck Davis perform a root canal on a patient at the Pentagon dental clinic. Dentistry is something the 19-year-old hopes to pursue as a career. ()

So says Seaman Austin Harnden, who got a huge kick out of learning why he had piqued a reporter&#8217;s interest.

And here he thought it was because he can walk backward for 1.5 miles, reciting the building&#8217;s 61-year history.

&#8220;Well, everyone has to start somewhere,&#8221; said the 21-year-old sailor who, along with three others, is among the most junior enlisted servicemembers assigned to the Pentagon &#8212; the figurative small fish in the big, powerful pond, the nerve center that is &#8212; the Department of Defense.

There&#8217;s the Marine admin clerk, an Army cook, a Navy tour guide and an Air Force dental assistant, each proudly representing his or her respective service, and the lowest ranking.

It&#8217;s a far cry from what he really wants to do when he grows up, Harnden joked.

He inherited from his mom both the knack for languages &#8212; she can speak Latin, French, German and Italian &#8212; and the passion to see the world. He&#8217;s lived in North Carolina, California, New Jersey, Louisiana and now Virginia. Traveling is in his blood.

For one year, he&#8217;s content to be seeing, over and over and over again, the inside of the Pentagon as he winds tourist groups through 1.5 of the 17.5 miles of Pentagon corridors.

From beans to bombs

The Pentagon, especially as a first tour in one&#8217;s military career, is not such a bad gig after all, says 19-year-old Pfc. Jacob Else, an Army cook.

He&#8217;s good at what he does and enjoys the art of cooking. (Though he refuses to do it for his ever-persistent young friends who long for his fine culinary touch.)

But it might not be the whole of his Army career, the ambitious young man said.

For now, he enjoys serving up meals to the military&#8217;s top leaders &#8212; and relishing in knowing that one particular service secretary likes tuna salad on a croissant, while another is a beef-and-potatoes kinda guy. (He doesn&#8217;t spill the beans.)

Throughout boot camp, his drill instructor kept telling the chef he was Korea-bound for his first stint in the Army.

Service with a smile

Airman Lotoya Barnaby, 19, is unfazed by working at the five-sided puzzle palace, as it&#8217;s sometimes called.

The nickname stuck after she told him of growing up in a single-parent home in the Bronx, joining the military because she had no money for college, and because she works longer hours than necessary in order to catch a bus from work to the barracks. She has no car of her own.

So why the Air Force?

In his first week on the job, Marine Pfc. Darrell Tucker learned the two-letters &#8220;n-o&#8221; might be the scariest he has to utter.

And so, as administrative clerk in Policy, Plans and Operations for the Marine Corps, Tucker learns the ins and outs of filing, data processing and building a thick skin as he pursues a career to be a lawyer.

&#8220;I always wanted a job in the military and as I got older, I remembered the Marines were better and I wanted to be part of the best.