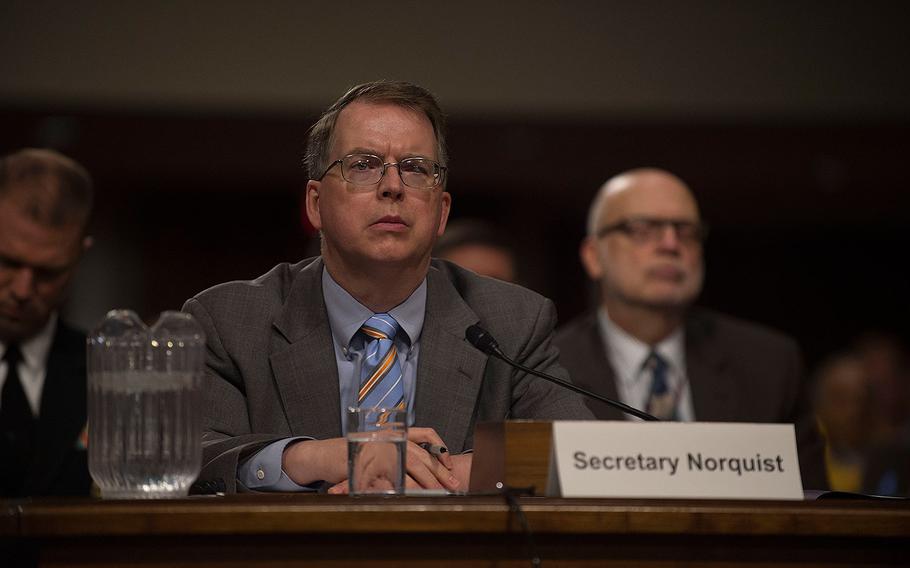 WASHINGTON — A panel of House lawmakers on Wednesday expressed frustration but offered support in telling the Pentagon’s top financial chief that the Defense Department’s first comprehensive review of its spending habits is long overdue.

The comments were part of the first hearing this year of the House Armed Services Committee, which focused on the progress of the Defense Department’s massive financial audit underway.

The effort won’t be cheap. The audit, called the Financial Improvement and Audit Remediation, will cost $367 million, the Pentagon’s Chief Financial Officer David Norquist testified Wednesday. In addition, it will cost an estimated $551 million or more to address a long list of fixes uncovered by auditors, such as addressing computer software failures and glitches tracking inventory. That brings the overall tally for the move close to $1 billion.

Still, lawmakers lauded the effort, saying it will set the stage for a new level of fiscal accountability at the Pentagon for years to come and reverse trends of financial waste that have plagued the department.

“To say that it’s not worth doing is like saying, ‘Hey, we’ve screwed it up so bad for so long, the cost of fixing it has just become overwhelming. So let’s just keep screwing it up,’” said Rep. Adam Smith of Washington, the ranking Democrat on the committee. “I get the upfront cost is going to be enormous, but …if we got to suck it up for a couple of years …to get back on track, it’s going to make significant improvements.”

In a more than hourlong hearing detailing the first public update of the Pentagon’s progress for its inaugural audit, Norquist told lawmakers that the effort will mark a cultural shift at the Pentagon. The audit, which is now required by law under the National Defense Authorization Act, is aimed for completion by Nov. 15.

“This may be one of the most important things we accomplish during our terms here in Congress,” said Rep. Bradley Byrne, R-Ala. “You will see a lot of support for your activities here on this committee.”

The undertaking will entail the work of an estimated 1,200 auditors who will dig into the count, location and condition of military equipment, real property and inventory, Norquist testified. The audit will also examine security vulnerabilities in the Pentagon’s business systems, validate the accuracy of personnel records such as promotions and assess whether the department’s books and records present a true and accurate picture of financial health, said Norquist, who was previously CFO for the Department of Homeland Security.

Audits aren’t entirely new to the Pentagon, where numerous reviews of performance and contract costs have been conducted by the Government Accountability Office, the Defense Contract Audit Agency, the Department of Defense Office of the Inspector General and the services’ audit agencies, Norquist said. But this Pentagon audit will occur annually and mark a much more comprehensive review, he said.

Norquist, however, warned it will take time to implement necessary process and system changes to pass the audit, as in the case for Homeland Security, which took ten years to get the first, clean result.

Rep. Mac Thornberry, R-Texas, who is chairman of the House Armed Services Committee, agreed the first audit will present a difficult challenge, but supports the plan in hopes that it will head off years of wasteful spending.

“We should never assume that an audit will solve the problems of waste and inefficiency. But it seems to me that an essential requirement of spending money smarter is knowing with certainty how it is being spent,” he said. “It is likely that the result of the first audit will not be pretty, but those results will help direct us all – Congress and the [Defense] Department – on where we need to apply our efforts to improve. This is important, and this committee will continue to pursue it.”

The $367 million price tag to perform the audit is comprised of accounting firm fees totaling $181 million and another $186 million for infrastructure to support the audits. The accounting firm fees mark less than 1 percent of the Defense Department budget and is equal to or less than what major Wall Street firms pay for their audits, Norquist said.

“On that scale of the enterprise, that money for accountability is money well spent,” he said. The additional $551 million “is to fix problems that we find. I don’t think operating in ignorance of the problems is the right way forward.”