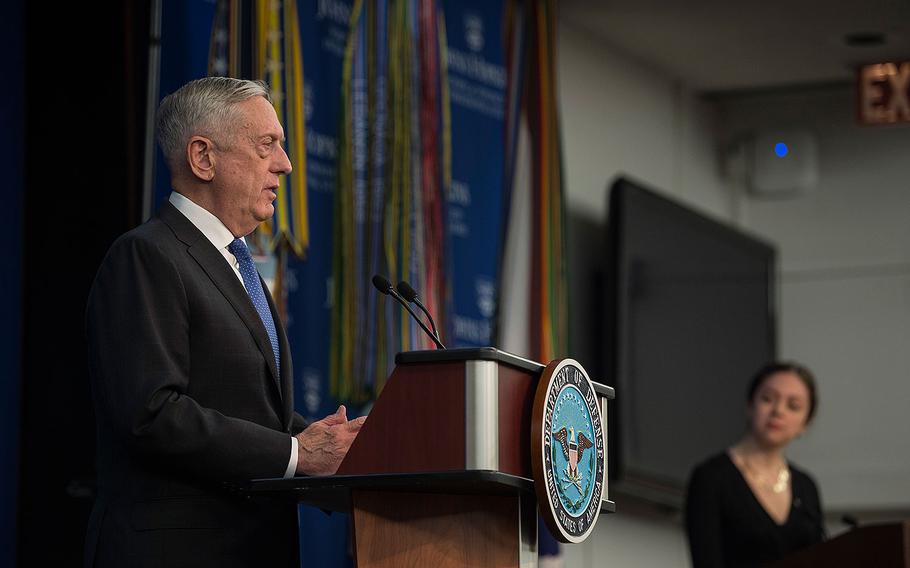 WASHINGTON — Defense Secretary Jim Mattis on Friday elevated protecting against a war with China and Russia as the United States’ primary security concern, stating “great power competition” has surpassed terrorism as the Pentagon’s chief focus for the first time in two decades.

The United States must develop a more lethal and technologically advanced force to counter the recent growth in military power and increased aggression demonstrated by China and Russia, Mattis said in a speech detailing the Pentagon’s new National Defense Strategy. The strategy, summarized in an 11-page unclassified version released Friday, is the first of its kind in a decade and outlines a vision for restoring the military’s combat readiness, which Mattis said has been depleted by 16 years of continuous war and years of budget instability.

“Our military is still strong, yet our competitive edge has eroded in every domain of warfare – air, land, sea, space and cyberspace – and is continuing to erode,” Mattis said at Johns Hopkins University’s Paul Nitze School of Advanced International Studies. “We have no room for complacency, and history makes clear that America has no pre-ordained right to victory on the battlefield.”

The strategy includes a three-fold effort to strengthen the U.S. military and deter the potential for new conflicts. Mattis said the United States must do everything it can to build a more lethal force, it must strengthen its existing alliances and build new partnerships, and it must reform the way the Pentagon manages its budget and acquires new technology.

Despite the increased focus on China and Russia, Mattis said the Pentagon is aware other threats still remain. He included the threats from rogue regimes in North Korea and Iran as top-tier concerns for the Pentagon, followed closely by the continuing threat of terrorism from groups including the Islamic State, al-Qaida and Hezbollah.

The new defense strategy derides recent actions of China and Russia. China has increased tensions in Southeast Asia with its buildup of artificial and often militarized islands in the South China Sea and its use of “predatory economics to intimidate neighbors,” according to the strategy summary. Russia has worried neighbors in Eastern Europe with its illegal annexation of Crimea, invasions of Ukraine and Georgia, and meddling in the elections of western nations, according to the strategy documents, which also call out Russia’s military intervention in Syria.

Nonetheless, Mattis’ strategy emphasizes the need to seek “peace through strength” and find opportunities to cooperate with both nations.

“Should cooperation fail, we will be ready to defend the American people, our values, and interests,” the strategy summary reads. “The willingness of rivals to abandon aggression will depend on their perception of U.S. strength and the vitality of our alliances and partnerships.”

“Let me be clear, as hard as the last 16 years of war have been on our military, no enemy in the field has done more to harm the readiness of the U.S. military than the combined impact of the Budget Control Act’s defense spending caps worsened by our operating in nine of the last 10 years under continuing resolutions,” Mattis said in his speech. “For too long we have asked our military to stoically carry a success at any cost attitude … with inadequate and misaligned resources simply because the Congress could not maintain regular order.”

Mattis said he remained “optimistic” Congress would find a way to fully fund the military, adding the new defense strategy should inform lawmakers exactly what direction he intends to take the department and why it is imperative they act quickly.

“This required tough choices — and we made them based upon a fundamental precept: namely, that America can afford survival,” he said.