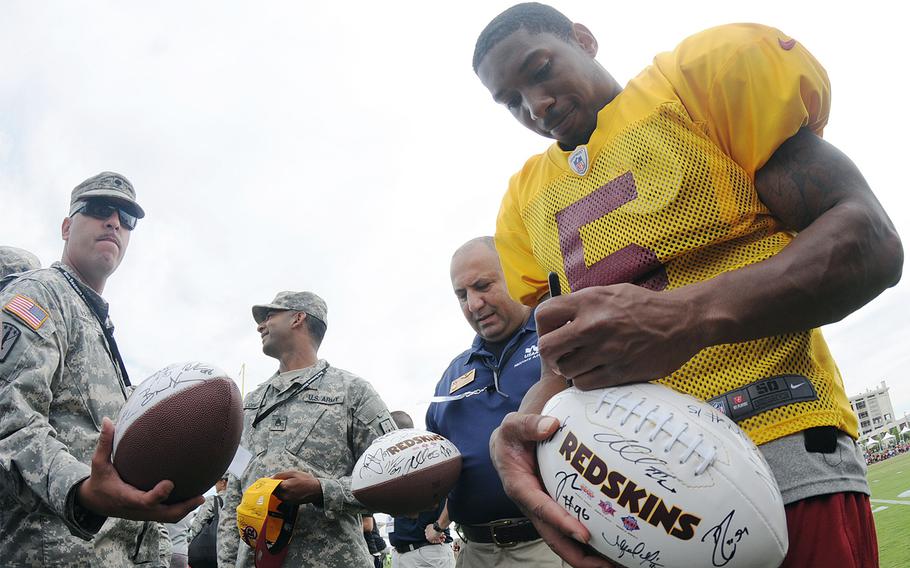 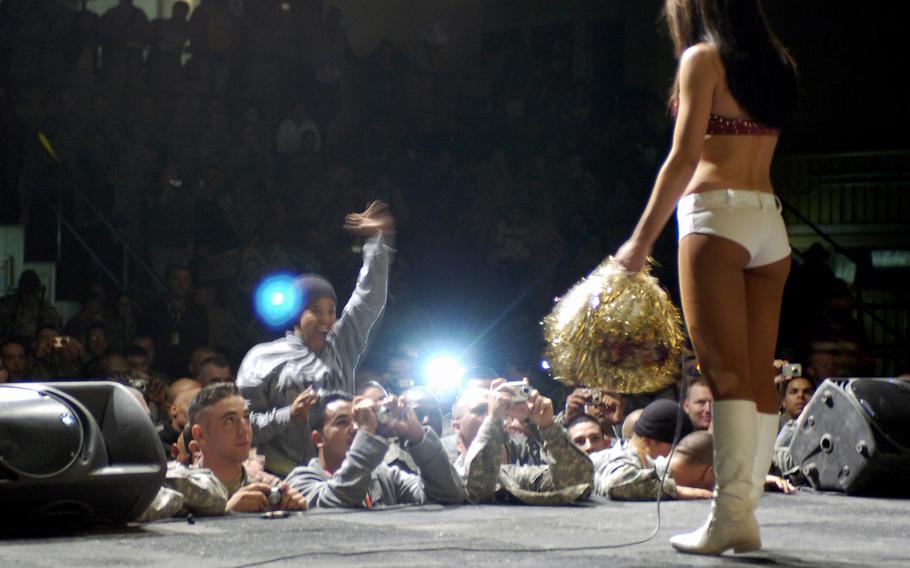 Washington Redskins cheerleader, Abby, invites U.S. troops up to the stage for the next performance during a show for Morale Welfare and Recreation on Contingency Operating Base Speicher, Tikrit, Iraq, on November 24, 2007. The cheerleaders visited during a tour of Iraq to show support for the troops. (Eric Rutherford/U.S. Army)

WASHINGTON — Defense Secretary Chuck Hagel has asked his staff for details about the U.S. military’s relationships with the National Football League in the wake of the scandal over how the league is handling domestic-abuse allegations against players, CNN reported Friday.

The Pentagon is increasingly sensitive to any suggestion it is supporting a major sports organization that is perceived to tolerate domestic violence.

Pentagon press secretary Rear Adm. John Kirby on Friday told reporters Hagel had some questions about the Pentagon’s relationship to the league, but said that no formal review or study was underway.

The military has a zero-¬tolerance policy in the ranks for domestic abuse, but it also has a decades-long, high-profile relationship with the NFL. Any Pentagon action to cut back support for the NFL would be the most direct involvement by the Obama administration yet in the scandal.

The NFL is under pressure from sponsors, fans and lawmakers for its handling of domestic-violence allegations against several players. Here is a look at some key developments:

The Minnesota Vikings reversed course and indefinitely benched star running back Adrian Peterson, claiming they “made a mistake” in reinstating him as he faced a child abuse charge in Texas for spanking his son with a tree branch. Arizona running back Jonathan Dwyer was arrested on aggravated assault charges in connection with two altercations at his home in late July involving a 27-year-old woman and an 18-month-old child. The Carolina Panthers removed Greg Hardy from the team’s active roster until his domestic violence case is resolved. Hardy was convicted July 15 of assault and communicating threats after the victim claimed the 6-foot-4, 275-pound player threw her in the bathtub and onto a sofa covered with guns before threatening to kill her. The Army alone spends $10 million a year on advertising during NFL games. Games are also broadcast by the Armed Forces Network to troops deployed overseas.

The Army and the NFL also have a agreement to share information and resources to better understand traumatic brain injury, which is a major medical issue for wounded troops and football players. They are working together on awareness of TBI as well as research into treatment. The military has been sharing some of the lessons learned on TBI from the last 13 years of war.

The White House is also closely monitoring the NFL controversy, with one senior administration official calling recent abuse allegations “deeply troubling” and stressing the league’s obligation to get “control of the situation.”

“Many of these professional athletes are marketed as role models to young people,” the official said. “So that’s one of the many reasons it’s important the league gets a handle on this and have zero tolerance.”