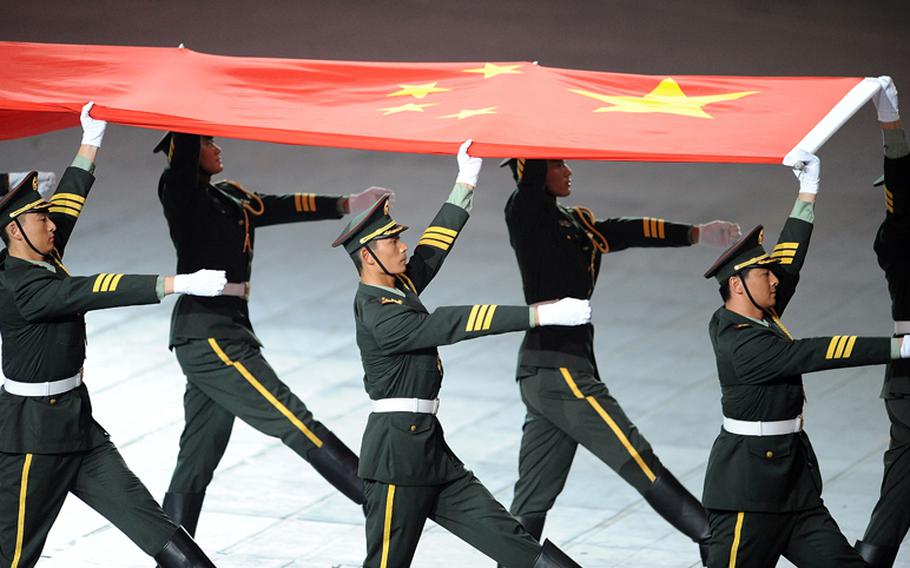 Soldiers carry the Chinese flag in the National Stadium during the opening ceremony of the XXIX Olympiad in Beijing, China, on Friday, August 8, 2008. (Joe Rimkus Jr., Miami Herald/MCT file photo)

WASHINGTON &mdash; China is in the process of modernizing and expanding its military to focus on goals beyond defense of its territories, and the United States is concerned that some of China&rsquo;s actions could run counter to the United States&rsquo; interests, the Pentagon said Friday.

The Department of Defense released its annual report to Congress on Chinese military and security developments. The report says Chinese leaders continue to focus on preparing for contingencies in the Taiwan Strait, while also working on &ldquo;new historic missions,&rdquo; such as deployments for counterpiracy and peacekeeping operations.

&ldquo;There&rsquo;s an opportunity for China to partner with us and with other countries to address the types of challenges we all face in the 21st Century,&rdquo; said Acting Deputy Assistant Secretary of Defense for East Asia and Asia Pacific Security Affairs David Helvey.

But China has continued to invest in cyberattack capabilities, short- and medium-range ballistic missiles, advanced aircraft, submarines and other capabilities, &ldquo;which appear designed to enable anti-access or area-denial missions, or what [Chinese military] strategists refer to as &lsquo;counter intervention operations,&rsquo;&rdquo; Helvey said, quoting directly from the report.

There is potential for cyberattacks from China to be extremely disruptive, he said, and the U.S. will continue to monitor those capabilities as well as the operational weapons systems China has at its disposal.

China&rsquo;s anti-ship ballistic missile has limited operational capability so far, and the J-20 stealth fighter is still in the prototype phase, Helvey said. China is also interested in developing drones, and has acquired various types of unmanned aerial vehicles in the past.

&ldquo;We see that there&rsquo;s opportunities to be able to partner with China in a variety of different ways,&rdquo; Helvey said. &ldquo;We&rsquo;d like to be able to have a conversation with China and the Chinese military on how we can deal in a kind of cooperative capacity to where we can work together in support of common objectives.&rdquo;

In terms of the relationship between the U.S. and China, Helvey said, there is &ldquo;very positive potential, but also potential challenges.&rdquo;