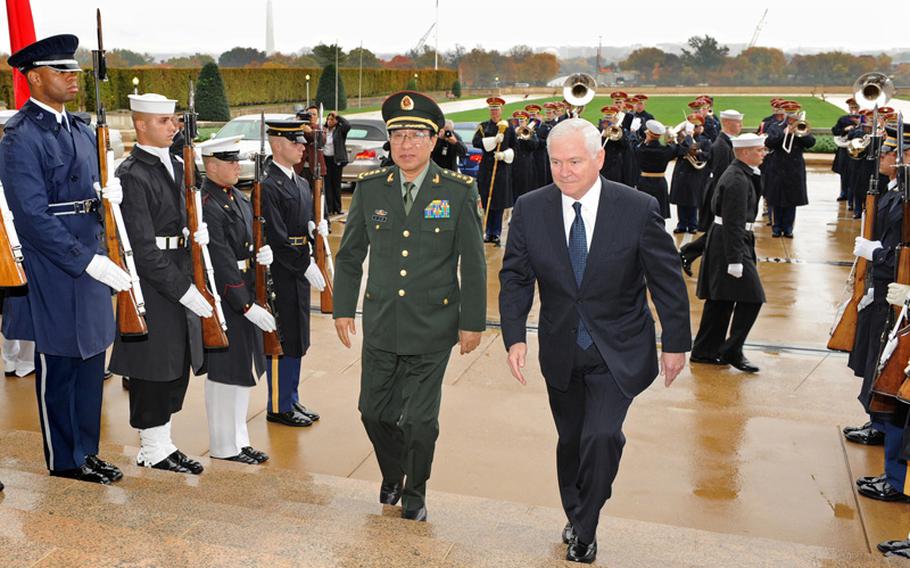 Chinese Gen. Xu Caihou arrives at the Pentagon last October for security talks with Defense Secretary Robert Gates. It was the last high-level meeting between the two militaries. (R.D. Ward/Courtesy of the Department of Defense)

ARLINGTON, Va. &mdash; China&rsquo;s military might and intentions remain largely a mystery to the U.S. as the Asian power continues to rebuff the Obama administration&rsquo;s efforts to spark an open military relationship, according to a Pentagon report to Congress released on Monday.

&ldquo;The pace and scope of China&rsquo;s military modernization have increased over the past decade,&rdquo; the Pentagon says in the detailed report.

But Beijing&rsquo;s continued refusal to let U.S. officials know of their military&rsquo;s intentions &ldquo;increases the potential for misunderstanding and miscalculation.&rdquo;

The annual report is supposed to be Defense Secretary Robert Gates&rsquo; best estimate of Chinese military engagements, spending and strategy, including an assessment of its arms buildup.

China has &ldquo;the most active land-based ballistic and cruise missile program in the world,&rdquo; the report said.

The People&rsquo;s Liberation Army is acquiring &ldquo;large numbers of highly-accurate cruise missiles,&rdquo; built in China and Russia, and is moving the more deadly and accurate arsenal to the Taiwan strait.

In 2009, the Pentagon estimates China deployed between 1,050 and 1,150 short-range missiles near the strait.

But the Pentagon&rsquo;s top concern, as the mainland develops and tests new offensive missiles, is with anti-ship, medium-range ballistic missiles the U.S. believes are designed to strike aircraft carriers more than 900 miles off its coast in the western Pacific.

China&rsquo;s military totals 1.25 million people, with an additional 500,000 in reserves, the Pentagon said. While China publicly claimed this year an annual defense spending total of $78.6 billion, a senior U.S. defense officials said the Pentagon&rsquo;s estimate of is closer to $150 billion.

This year, Congress required the Pentagon to report on several new areas, including what new weapons platforms would extend Chinese power, details of U.S.-Chinese military engagements and an assessment of what each side stands to gain from them.

The U.S. continued to blame China&rsquo;s political leaders for the freeze in relations between the countries.

&ldquo;Only when China determines that it is in its own interest to sustain engagement through periods of turbulence will it be possible to build a more solid foundation for military-to-military relations,&rdquo; the report states.

Defense officials complained Monday that China&rsquo;s unwillingness to meet with U.S. military officials has left them few options other than waiting for a friendlier response from Beijing. China has shut out U.S. officials since Washington announced a $6 billion arms sale to Taiwan, earlier this year. The U.S has said the sale was not a surprise and consistent with its international agreements.

&ldquo;It only does us so much good to show up to a meeting if we&rsquo;re the only ones that are there,&rdquo; said a senior defense official the Pentagon made available to brief reporters but who was unauthorized to speak on the record.

&ldquo;We clearly still have a long way to go in U.S.-China security relations,&rdquo; he said.

Also new to this year&rsquo;s report is a detailed organizational chart of China&rsquo;s military leadership structure. The U.S. believes there is internal debate among Chinese leaders about how much to reveal to the world.

&ldquo;Extreme secrecy is increasingly difficult to reconcile with China&rsquo;s role in the integrated global economy, which depends on transparency,&rdquo; the report said.

Yet, as the Pentagon report was released, China was named the world&rsquo;s second-largest economy.

What is clear is that China is beginning, if slowly, to push beyond its normal territorial concerns. The PLA has 12,000 personnel in United Nations peacekeeping missions worldwide and is participating in global aid missions. In 2009, China projected its force further than ever, cooperating with the multi-nation anti-piracy effort in the Gulf of Aden off the east coast of Africa.

But China&rsquo;s ability to sustain such military power far from the mainland &ldquo;remains limited,&rdquo; the report stated.