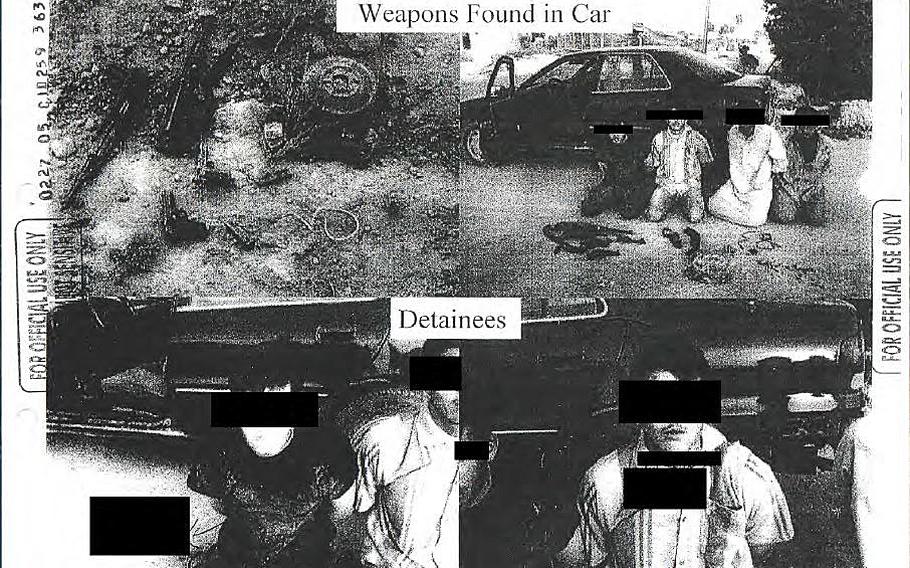 A PDF screen grab shows one of the 198 photographs the Pentagon released Friday that reveal injuries sustained by detainees in U.S.-run detention facilities in Iraq and Afghanistan. (Defense Department)

WASHINGTON — The Pentagon released 198 photographs late Friday afternoon of serious injuries sustained by detainees in U.S.-run detention facilities in Iraq and Afghanistan, some of which were evidence used to prosecute U.S. soldiers for abuse.

A 162-page PDF document shows the photographs, which were taken between 2001 and 2009. Some of them are color photos and some are in black and white and show contusions and open wounds. In most cases, only parts of a body are shown. In at least one case a prisoner is seen sitting up in a chair.

The photographs were tied to U.S. military investigations that looked into reports of alleged abuse. Of the 56 allegations tied to the photographs, subsequent investigations substantiated the claims in 14 of the cases, which resulted in disciplinary action against 65 servicemembers, the Defense Department said in a prepared statement.

The Pentagon provided no names or locations of where the abuses occurred, or the corresponding punishments for military personnel who were convicted. However, each photograph contains the corresponding U.S. Army Criminal Investigation Command case numbers.

In one example, identified as an Army Criminal Investigation Command case from 2004, black and white photographs depict a detainee holding a pen to his shin just under an area that appears slightly discolored. According to redacted files obtained by the American Civil Liberties Union through the Freedom of Information Act and presented on its website, The Torture Database, the photos show a detainee from Abu Ghraib Prison in Iraq who claimed he was hit in the head with a rifle and kicked in the shin while detained at Al-Adhameyah Palace. CID concluded there was not enough evidence to determine whether the detainee, whose name was redacted, had been abused by U.S. or coalition forces. Investigators did, however, determine the detainee was likely abused by Iraqi Civil Defense troops.

The photographs were released as part of a regular review DOD conducts every three years of its protected photographs. The three-year reviews are required by the Protected National Security Documents Act of 2009, which states the DOD is required to determine whether the release of the images would endanger national security.

Click here for the link to the photographs publicly released Friday.