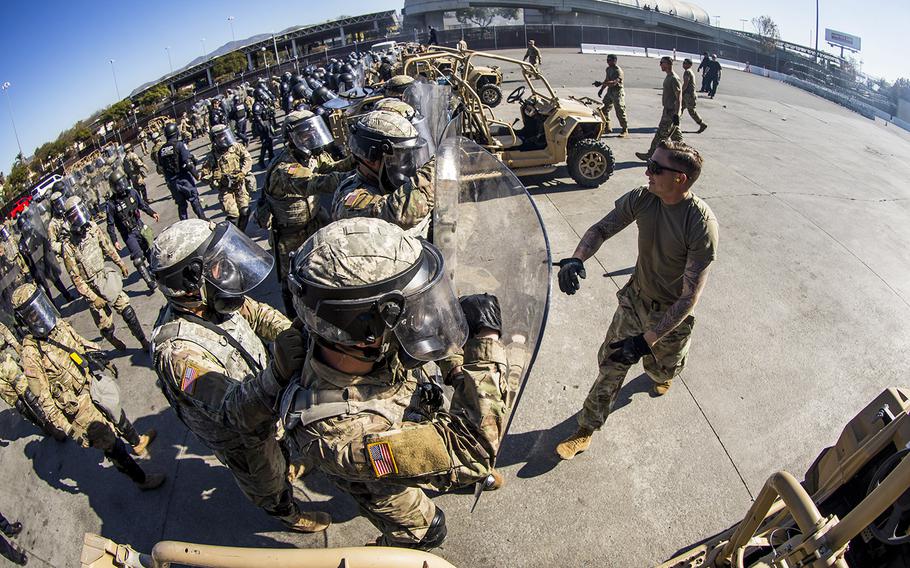 AUSTIN, Texas – The Defense Department received a new request for more assistance along the U.S.-Mexico border from the Department of Homeland Security, defense officials confirmed Friday.

Pentagon officials who spoke on the condition of anonymity said the request is for “additional capabilities to support Customs and Border Patrol on the southwest border.” They would not elaborate.

An existing agreement between the two departments has about 2,350 active-duty servicemembers stationed within three states bordering Mexico to support Border Patrol agents, said Col. Cathy Wilkinson, public affairs director for U.S. Army North. About 600 of the deployed troops are in Texas, 650 are in Arizona, and 1,100 in California. The force size deployed to the border peaked at 5,900 servicemembers in mid-November.

The troops’ mission to “harden” the border included military engineers building barriers across about 70 miles using coiled razor wire, according to information released in late December by U.S. Northern Command. Military police units have conducted more than 10,000 hours of unit training and combined rehearsals with Border Patrol in all three states. Military rotary wing aviators have flown more than 740 hours.

Servicemembers from the Army, Navy, Air Force and Marines arrived on Oct. 31 and were expected to leave by the end of January. It was unclear Friday whether the new request would extend their stay beyond that deadline, officials said.

The servicemembers are working to support Border Patrol agents, who are working without pay during the now two-week-old partial federal government shutdown. The Defense Department is funded, but Homeland Security falls under the portion of the government operating without a budget since Congress failed to pass one by Dec. 21. The shutdown has not impacted the operations of servicemembers at the border, said Navy Capt. William Speaks, a spokesman at the Pentagon.

The government shutdown hangs on a disagreement between congressional Democrats and the White House to fund President Donald Trump’s campaign promise of building a wall along the U.S. border with Mexico. Trump has said he will not sign a spending resolution to end the shutdown without $5 billion included in border-wall funding. Democrats are refusing to relent to the president on this issue, leaving no clear end in sight.

In the past month, the president has hinted at using the military to build the border wall, and reporting from NPR on Thursday indicated that might be in the planning process. Citing anonymous military sources, NPR reported more troops will deploy to build 160 miles of fencing in California and Arizona and provide medical care to migrants.

A Thursday afternoon news conference with Border Patrol officials was expected to provide an update on border security. Instead, Border Patrol union members joined Trump for a White House news briefing to share support for a border wall.

“We are all affected by this shutdown,” said Art Del Cueto, a Border Patrol agent and national spokesman for the agency’s union, the National Border Patrol Council. “We have skin in the game. It comes down to border security. We are extremely grateful to President Trump and fully support what he is doing.”

The president followed his conference by sending a letter Friday to all members of Congress on the need to secure the border. The White House news release stated he also sent members a presentation from Homeland Security Secretary Kirstjen Nielsen that highlights the dangers at the border.