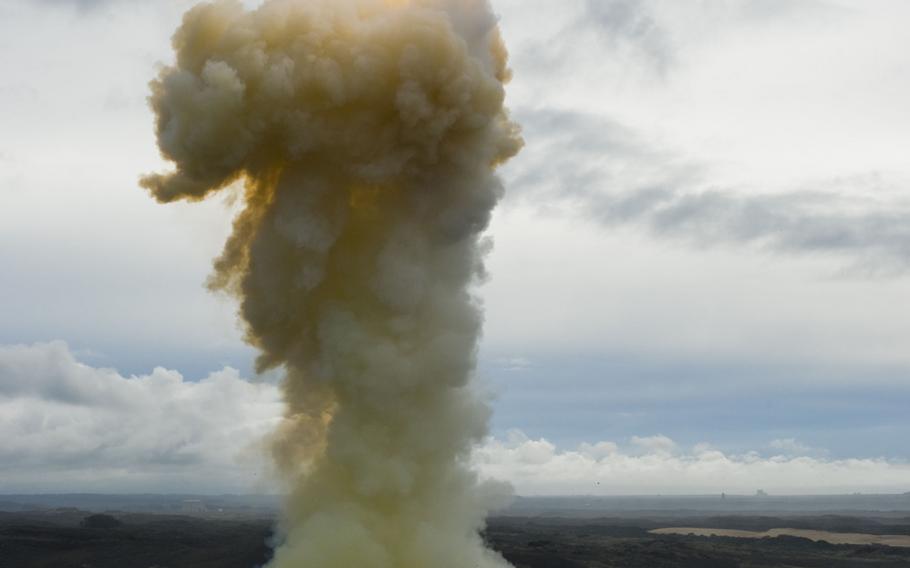 An interceptor missile launches from Vandenberg Air Force Base, California, in this December 2010 file photo during a test of the Ground-based Midcourse Defense system. It failed to destroy a mock ballistic missile launched from the Marshall Islands. (Courtesy of Missile Defense Agency)

FORT SHAFTER, Hawaii — The Pentagon has yet to explain how it can save a beleaguered missile intercept program intended to defend against ballistic attacks by nations such as North Korea and Iran, a report by a government watchdog agency says.

The Government Accountability Office examined a 2013 report by the Department of Defense purporting to explain how the Ground-based Midcourse Defense program could become viable. In the past three tests of the system — two in 2010 and one last year — failures plagued the so-called “kill vehicle” that detaches, detects and destroys the threat.

GMD is overseen by the U.S. Missile Defense Agency. Thirty interceptor missiles are already deployed at Fort Greeley, Alaska, and Vandenberg Air Force Base, California. The Pentagon has said it plans to deploy another 14 interceptors in Alaska by 2017 — provided a planned test succeeds later this year.

The Defense Department’s report, mandated as part of last year’s defense budget, suggested that accelerated testing would be the key to reaching an acceptable level of interceptions by the kill vehicle.

However, a GAO report, released Wednesday, concluded “it is unlikely that DOD can successfully accelerate the pace of GMD’s testing given its testing track record and the increasing complexity of planned tests.

“In addition, the report provided insufficient information to assess whether accelerating GMD’s testing pace is prudent because it did not address the potential full cost, benefits, and risks of accelerating testing,” the report added.

America has other missile defense programs that are space- and sea-based or that target enemy missiles close to launch or at re-entry from the atmosphere. As its name suggests, GMD is intended to destroy missiles while in midcourse.

Last year the GAO calculated that the GMD system would cost about $41 billion through 2017. Costs have increased significantly over original projections because the system has been concurrently manufactured, deployed and tested — a practice that has led to costly redesigns and retrofits, the GAO said.

But with so much time and money already invested and generally bipartisan support in Congress, it’s unlikely that lawmakers will “walk-back” on the current GMD track, said Lora Saalman, an associate professor with the Asia-Pacific Center for Security Studies in Honolulu.

“The important point to keep in mind is that this is not simply a domestic issue, but also a global one in terms of external perceptions regarding the effectiveness of GMD and overall U.S. military [research and development] programs,” Saalman said.

It seems likely, however, that the missile’s kill-vehicle is in for another redesign. The Pentagon’s director of operational testing and evaluation, Michael Gilmore, wrote in a January report that the last three failures “raise questions regarding the robustness” of the current design.