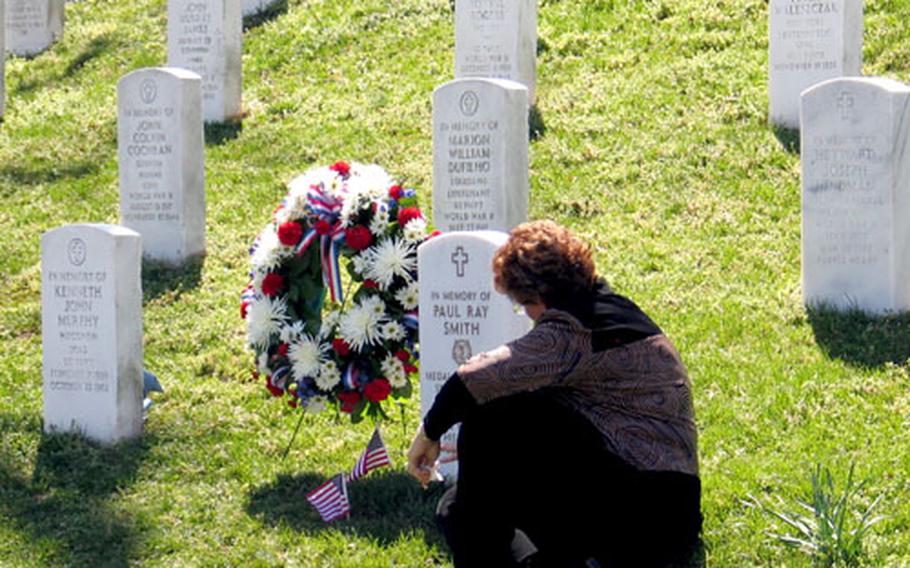 Birgit Smith, the widow of Sgt. 1st Class Paul R. Smith, breaks down in tears in front of the memorial site of her husband. The marker was dedicated in a ceremony at Arlington National Cemetery, Va., on Tuesday, the day after Smith was posthumously awarded the Medal of Honor. (Jon R. Anderson / S&S)

Birgit Smith, the widow of Sgt. 1st Class Paul R. Smith, breaks down in tears in front of the memorial site of her husband. The marker was dedicated in a ceremony at Arlington National Cemetery, Va., on Tuesday, the day after Smith was posthumously awarded the Medal of Honor. (Jon R. Anderson / S&S) 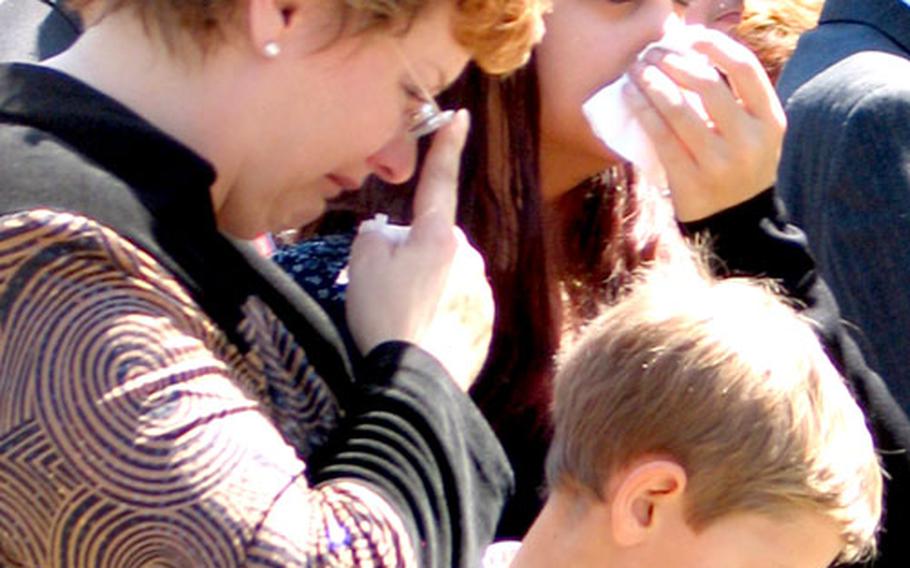 ARLINGTON, Va. &#8212; Family, top brass and ordinary soldiers gathered Tuesday to honor the newest inductee to the elite ranks of the nation&#8217;s most valorous.

In two ceremonies, Sgt. 1st Class Paul Ray Smith was remembered as a tough soldier whose legacy will continue for generations as an example of a man who served his nation and made a difference in the lives of others.

On April 4, 2003, Smith rallied the defense of his outnumbered company of combat engineers, killing as many as 50 Iraqi Republican Guards before falling to a fatal head wound. He was posthumously awarded the Medal of Honor on Monday at the White House.

&#8220;Today, we assemble in another special place, where we will memorialize Sgt. 1st Class Smith by placing him in a formation with ranks filled by our nation&#8217;s most courageous here in the Hall of Heroes,&#8221; Army chief of staff Gen. Peter Schoomaker told a somber gathering at the Pentagon on Tuesday.

&#8220;As I had the honor of serving with and knowing intimately the last two soldiers who joined this special formation,&#8221; said Schoomaker, who as a former Special Operations commander led Master Sgt. Gary Gordon and Sgt. 1st Class Randall Shughart before they were killed in Somalia in 1993, the last to earn the Medal of Honor. &#8220;I am certain that they are very proud to welcome our newest hero, because they are brothers.&#8221;

With the names of the more than 3,000 servicemembers who have earned the Medal of Honor etched in brown marble, the Hall of Heroes is a solemn temple of the nation&#8217;s bravest warriors.

With each recipient listed under the war or campaign in which he fought, Defense Secretary Donald Rumsfeld unveiled Smith&#8217;s name under a new heading: War on Terror.

Connecting Smith&#8217;s service and death in Iraq to the Sept. 11, 2001, attacks on the United States, Rumsfeld evoked the memory of the fiery collapse of the World Trade Center.

&#8220;But this much we do know,&#8221; said Rumsfeld, &#8220;from our earliest days, America has had the great good fortune to be blessed by volunteers, who have stepped forward to defend the American people and to defend our free way of life.&#8221;

Choking back tears, Smith&#8217;s widow, Birgit, said she was proud her husband was one of those people.

&#8220;Paul loved his country, he loved the Army, and he loved his soldiers. He loved being a sapper (combat engineer). He died doing what he loved,&#8221; she said.

&#8220;I&#8217;m grateful the Army gave Paul the opportunity to fulfill his dream of serving his country, she added. &#8220;Every soldier has a story. Because of this award, Paul&#8217;s story of uncommon valor will forever be remembered. As soldiers, I encourage you to tell your stories, because the American people and the world will better understand the sacrifice of Paul and others like him. One soldier&#8217;s story at a time.&#8221;

A few hours later, in the western shadow of the Pentagon, Sgt. Maj. of the Army Kenneth Preston continued the theme of service to nation at Arlington National Cemetery where a new memorial was unveiled with Smith&#8217;s name etched in the white stone.

Smith&#8217;s 11-year-old son David, who in front of a White House gathering accepted his dad&#8217;s medal on behalf of the family the day before, sat stoically between his weeping mom and sister as Preston recounted the day Smith died.

&#8220;On that day, 100 American solders witnessed and learned leadership of extraordinary proportions &#8212; leadership that changes and influenced their lives forever,&#8221; said Preston. &#8220;Those 100 men will in turn lead hundreds of soldiers who will benefit from that leadership, gained from serving with Sgt. 1st Class Smith. The process will continue to be shared across the Army from one unit to another.&#8221;

Soldiers travel near and far to remember

In their own way, and following their own quiet paths, soldiers wearing the 3rd Infantry Division combat patch on crisp dress green uniforms, made their way from one public ceremony honoring one fallen soldier to more private reflections before the graves of two others.

They had traveled to Arlington National Cemetery from posts and stations across the United States and from as far away as the combat zone in Iraq to pay tribute to combat engineer Sgt. 1st Class Paul Ray Smith, a fallen brother who had earned the Medal of Honor.

That&#8217;s where the graves of those killed in Iraq and Afghanistan are.

Staff Sgt. Lincoln Hollinsaid and Pfc. Jason Meyer are among them.

Hollinsaid replaced Smith as platoon sergeant after he was killed in action April 4, 2003, as 3rd Infantry Division was preparing for the final push into Baghdad.

Capt. Michael Bliss, their company commander, was among those drawn to their graves to pay his respect.

No explanation necessary. It&#8217;s what soldiers young and old are compelled to do &#8212; remember the fallen and give thanks for their lives.