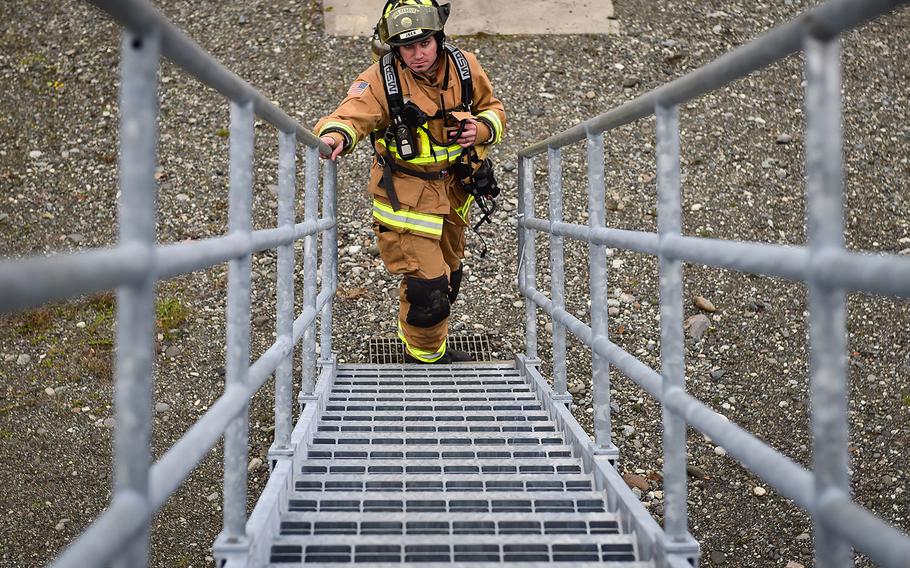 In a September, 2016 file photo, a firefighter waits for the order to begin training on a simulated aircraft fire at Joint Base Elmendorf-Richardson, Alaska. (Justin Connaher/U.S. Air Force)

Work broadly defined the jobs that could be filled during the 90-day hiring freeze, which does not include uniformed military personnel, instituted Jan. 23 by Trump in an executive memorandum. The Pentagon will continue filling jobs that directly support ongoing contingency operations and deployments, most of them in the cybersecurity and firefighting and law enforcement, he wrote. Work’s memo also states hiring can continue for civilian jobs at Navy shipyards and military depots responsible for inventory management and equipment maintenance.

Additional positions within the department can be exempted from the hiring freeze if officials can demonstrate to Work “compelling reasons that justify” that they are necessary to ensure national security or public safety, he wrote in the memorandum.

Work indicated the Pentagon supported Trump’s temporary hiring freeze. Last year, Work implemented a smaller-scale temporary hiring freeze on the department, which officials said led to the elimination of some then-vacant positions. He has mandated the Defense Department shrink its headquarters’ staffs by 25 percent by 2020.

“This is an opportunity for the department to assess its most critical missions and requirements, ensuring that the civilian component of our force is assigned and capable of executing our highest priority work, while at the same time gaining full value from every taxpayer dollar we spend on defense,” Work wrote. “Every action we take as a team will be designed to ensure that we are ready to fight today and in the future.”

It was not immediately clear Thursday how many positions within the Department of Defense were vacant or how many vacant positions could be exempted under Work’s order, said a senior defense official, who spoke on condition of anonymity to provide details about the order.

The official said Work intentionally left the definitions of the jobs broad, but managers in charge of hiring for those positions must be able to justify their decisions. Additionally, the official said, managers have been instructed to use the hiring freeze exemption “sparingly,” and in a manner that is “consistent with the president’s objectives” of shrinking the federal workforce.

“They’re going to really have to look at the functions of the position to ensure they are absolutely necessary to meet the national security or the public safety responsibility,” the senior defense official said. “We’re going to really need to look directly at the duties associated with that position, and officials are going to have to look at alternative ways to meet the department’s needs with that position to demonstrate that there’s no alternative to filling that position for national security or public safety.”

• Positions required for cybersecurity and cyberspace operations or planning.

• Positions required for execution of the cyber and intelligence lifecycle operations, planning or support thereof.

• Positions necessary to carry out or enforce treaties and other international obligations.

• Positions providing operational support to the president of the United States, the secretary of defense, or [the] chairman, Joint Chiefs of Staff.

• Positions providing child care to the children of military personnel.

• Positions performing mortuary affairs activities and other directly related services necessary to properly care for the fallen and their families.

• Positions required to be filled by a foreign national employee.

• Positions in shipyards and depots in which positions’ incumbents perform direct management of inventory and direct maintenance of equipment.

Positions that are vacant can also be filled if a person was hired for the job prior to Jan. 22 and confirmed to start working before Feb. 22, the official said.

Instituting the hiring freeze, which also forbids federal agencies from hiring contractors to work in vacant positions, was among Trump’s first actions as president. It was meant to protect American taxpayers and halt runaway growth within the federal government, according to the White House.

The Pentagon, which employees some 755,000 civilians, has grown its civilian workforce by some 100,000 employees in the years since the 9/11 terrorist attacks.

The freeze will remain in place for three months while the Office of Management and Budget creates a “long-term plan to reduce the size of the federal government’s workforce through attrition,” Trump’s memorandum states.

Some members of Congress have been critical of Trump’s hiring freeze, especially on its potential impact at the Pentagon and the Department of Veterans Affairs.

Rep. Adam Smith, D-Wash., earlier this week called the hiring freeze a “boneheaded, ideological attack on the functioning of our government” and expressed concerns it could degrade military readiness. Smith is the top Democrat on the House Armed Services Committee.

Rep. Vicky Hartzler, R-Missouri, on Wednesday authored a letter to Trump urging him to exempt defense officials working on acquisitions. The letter was signed by 18 other House Republicans.

“Their work directly impacts our military’s ability to modernize its equipment and keep its technological edge against a broad range of threats,” Hartzler, who is the chairwoman of the Armed Services Oversight and Investigations Subcommittee, wrote in the letter.