Pentagon: OK to talk about faith, but not to push beliefs on others 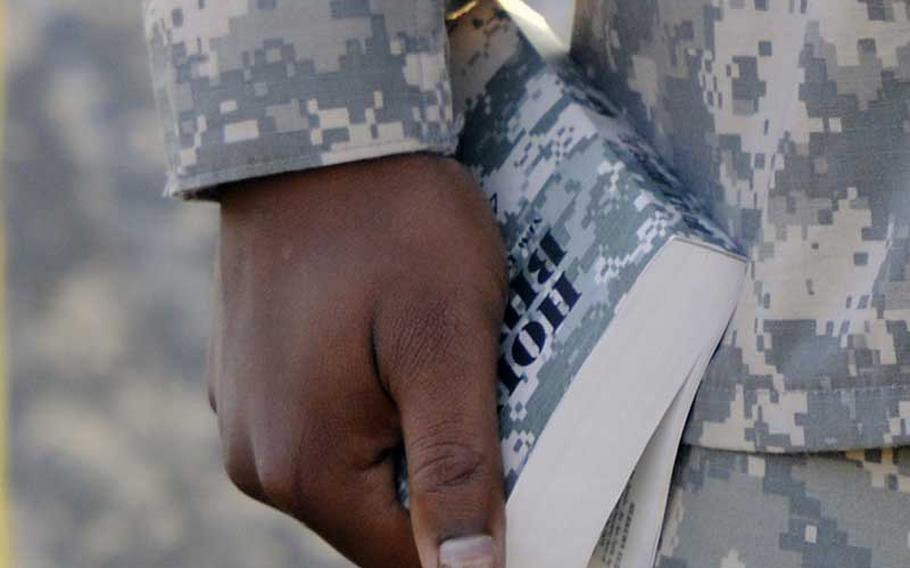 WASHINGTON — It’s OK to evangelize. But it’s not OK to proselytize.

That’s what the Pentagon said Thursday, attempting to clarify its position on religious speech in uniform as controversy swirled up around press reports over possible prosecutions of troops for sharing their faith.

What it comes down to, officials said, is that discussing matters of faith and religious practice with a willing audience is allowed, but pushing religious beliefs on those who don’t want to hear it is a form of harassment forbidden under Defense Department policies.

“Service members can share their faith (evangelize), but must not force unwanted, intrusive attempts to convert others of any faith or no faith to one’s beliefs (proselytization),” Pentagon spokesman Lt. Cmdr. Nate Christensen said in a written statement.

Officials said there was no plan to step up disciplinary action to weed out unacceptable religious speech.

Outlets including the Fox News website and the Washington Times published an earlier statement from Christensen that appeared to raise the possibility of prosecutions.

“Religious proselytization is not permitted within the Department of Defense,” the statement read. “Court martials and non-judicial punishments are decided on a case-by-case basis.”

The lead of a story that appeared on the Washington Times website Thursday concluded that the Pentagon meant that “Soldiers who promote their faith can be prosecuted under military law.”

But officials said the quote combined two separate statements — one about regulations against proselytization and another about how court martials are brought — to wrongly raise the specter of a move to bring increase disciplinary and legal actions against religious activity.

The earlier quote from Christensen appeared in stories about a meeting last week between Mikey Weinstein, the controversial head of the Military Religious Freedom Foundation, and Air Force officials.

Weinstein, who has long waged a public fight to dismantle what he sees as an ingrained culture of proselytization by some Christian officers, met with officials including the Air Force Judge Advocate General and deputy chief of chaplains to express his concern about matters of religious freedom.

The Pentagon, however, stressed that Weinstein is not a DOD consultant or a member of any advisory board.