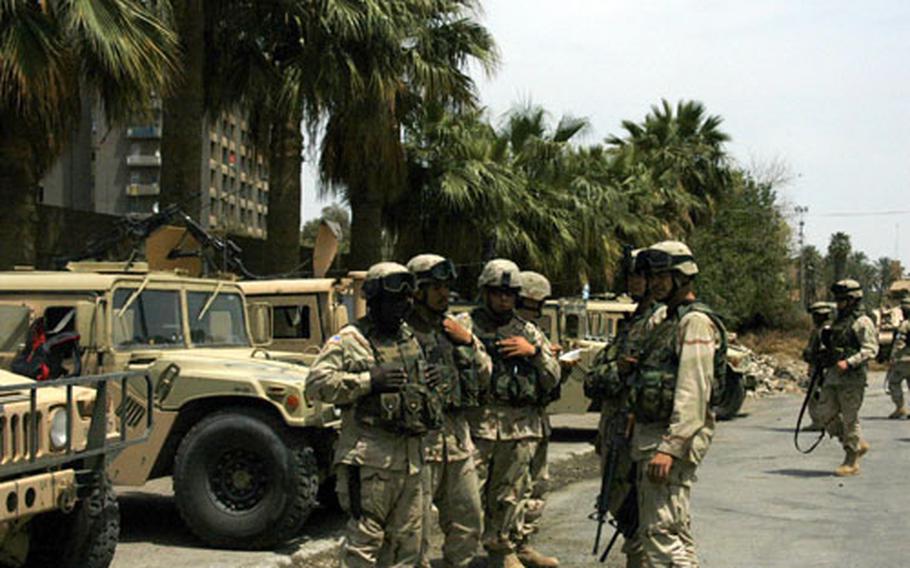 For Sgt. Joe Cabra, of Company C, 1st/160th Infantry, said his unit was trying to do its own upgrades to all of its soft Humvees. They&#39;ve put steel plates on the sides of the vehicles and wood on the top. "It&#39;s a lot better than nothing," Cabra said. "Just pray to God it works." (Nancy Montgomery / S&S)

ARLINGTON, Va. &#8212; Five of the Pentagon&#8217;s key acquisition officials were called to Capitol Hill on Wednesday to explain why armor to protect troops against IEDs has been so slow in getting to Iraq.

Rep. Duncan Hunter, R-Calif., chairman of the House Armed Services Committee, said he is concerned that the Pentagon&#8217;s defense acquisition system does not have &#8220;the ability to rapidly meet our soldiers&#8217; needs&#8221; for force protection, especially protecting convoys against improvised explosive devices, or roadside bombs.

Yet the pace of armoring vehicles such as Humvees, and bringing new vehicles with built-in armor, is painfully slow, Hunter said.

It&#8217;s so slow that troops on the ground are doing whatever is necessary.

Maj. Gen. Martin Dempsey, commander of the 1st Armored Division, said the 1st AD came to Iraq with some 26 armored Humvees a year ago. Now, with do-it-yourself upgrades, they have about 300. Maybe 300 more remain unarmored, Dempsey said.

Although IED attacks on U.S. soldiers in Iraq began in mid-May 2003, it wasn&#8217;t until November that the Pentagon had authorized production of armoring kits for vehicles already in Iraq, Hunter noted.

&#8220;The bad guys [have] come up with a system that is extremely effective at causing American casualties, at taking out Americans &#8212; in this case, IEDs &#8212; and it takes months and months and months for the United States to respond,&#8221; Hunter said.

Hunter used as an example the lack of progress on the &#8220;Interim Gun Truck,&#8221; an FMTV (the U.S. military&#8217;s Family of Medium Tactical Vehicles) with an added box on the bed to protect troops who man mounted machine guns.

Steel panels to armor up to 60 gun trucks against improvised explosive devices are languishing on a loading dock in Pennsylvania, while troops in Iraq cobble together homemade plywood barriers in an effort to protect themselves, according to Hunter.

But the project has stalled because an Army general &#8220;stopped all of the cutting because he wanted to retest the Stryker steel, which has been tested for about 10 years now,&#8221; Hunter said.

Maj. Gen. Buford Blount, the Army&#8217;s Assistant Deputy Chief of Staff for Operations, pledged to get the steel for the trucks to Iraq.

But Hunter had other concerns, including the impending shutdown April 30 of the Army&#8217;s production facilities for vehicle armoring kits.

The Army has &#8220;moved out smartly&#8221; to respond to the requirement for vehicle armoring kits, which went from 1,139 in early November to 8,400 today, according to Lt. Gen. Joseph Yakovac Jr., military deputy to the assistant secretary of the Army for Acquisition, Logistics and Technology.

There are seven Army arsenals putting together the armor kits under the umbrella of the Army&#8217;s Tank-automotive and Armaments Command, or TACOM, and the facilities are ahead of schedule, Yakovac said.

But on March 11, commanders on the ground in Iraq asked the Pentagon for another 856 add-on armor Humvee kits; 236 truck kits, including FMTVs; and 800 gun-truck armor kits.

But Pentagon leaders have not addressed the request, Hunter said, which means there are no funds and &#8220;no material requisition in the pipeline for the steel mills to continue to make armor plates&#8221; for the kits after April 30.

&#8220;Seven Army arsenals will stand down, with a break in production, when we already know there are emerging requirements coming from theater,&#8221; Hunter said.

Yakovac said that he has not seen the new requirement, but that &#8220;we will do what it takes not to do a break in production.&#8221;

But Hunter said he&#8217;s also worried that the Bush administration has not earmarked enough funds in its 2005 Pentagon budget request to Congress to fully meet the Army&#8217;s projected need for up-armored Humvees and add-on kits.

The Army&#8217;s budget request includes $156.3 million to procure 818 up-armored Humvees, not the 2,431 that Army officials told Congress they would need in an &#8220;unfunded requirements&#8221; list that House lawmakers requested after the budget was released.

The unfunded requirements document says that in 2005 the Army will need an additional 3,132 up-armored Humvees, as well as at least 1,400 armor upgrade kits, that together total $837 million, HASC spokesman Harald Stavenas confirmed Friday.

The Army is on track to complete the current requirement for up-armored Humvees, 4,402 new vehicles, by September 2004, according to Maj. Gary Tallman, an Army spokesman.

As of April 20, approximately 2,600 were already in Iraq, Tallman said.

&#8212; Nancy Montgomery contributed to this story from Baghdad.