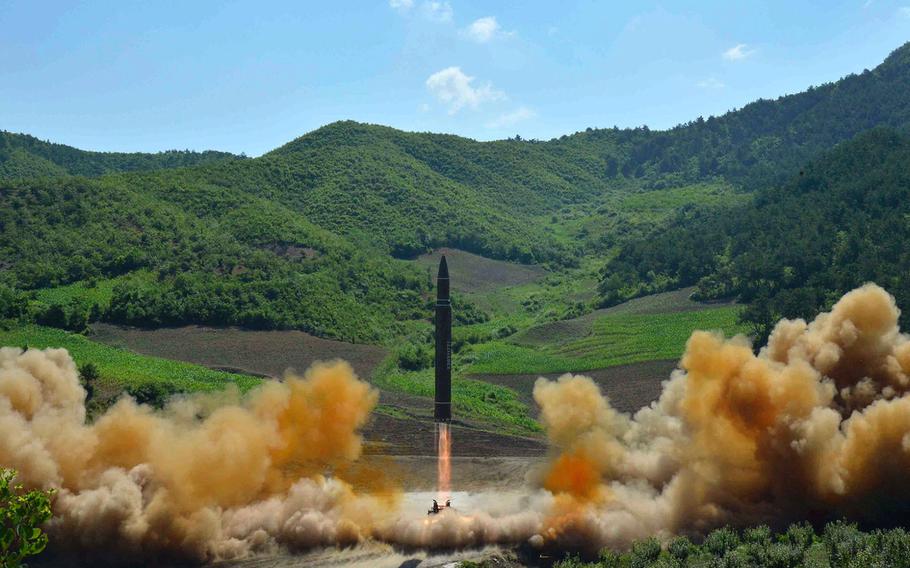 The launch was North Korea’s second successful test of a long-range missile this month.

The weapon was fired from Mupyong-ni, an arms plant in the far northwest of the country, and splashed down into the Sea of Japan about 620 miles east of the launch site, said Navy Capt. Jeff Davis, a Pentagon spokesman.

The U.S. military detected and tracked the missile throughout its entire flight and quickly determined it posed no threat to North America.

Had the missile threatened American assets or its allies, Davis said, the United States was prepared to respond.

“Our commitment to the defense of our allies, including the Republic of Korea and Japan, in the face of these threats, remains ironclad,” he said. “We remain prepared to defend ourselves and our allies from any attack or provocation.”

The Pentagon had been anticipating a North Korean test of an intercontinental ballistic missile, or ICBM, Davis said.

U.S. officials had said they expected another North Korean missile launch this week, citing increased activity at known missile sites. Thursday also marked the 64th anniversary of the armistice that ended the Korean War, and North Korea often attempts to time its tests with high visibility events, the officials said.

Japanese government officials said the missile launched Friday flew for about 45 minutes before falling into the waters in Japan’s exclusive economic zone, according to a report by Kyodo News, a Japanese news agency.

The test marks the second time that Kim Jong Un’s regime has successfully tested the longest-rang class of missiles.

On July 4, North Korea launched an ICBM for the first time. That missile flew for 37 minutes before landing in waters off the coast of Japan, the Pentagon said.

The North Koreans have not only demonstrated increased range of their weapons in 2017, they have also increased the frequency of their tests.

The country has now conducted 14 ballistic missile tests in 2017, according to Shea Cotton, a research associate at the James Martin Center for Nonproliferation Studies. It conducted 16 tests in 2016 and only 16 during the entire 17-year reign of Kim’s father, Kim Jong Il.

The missile launched July 4, a “Hwasong 14” ICBM, might have had the range to hit Alaska or Hawaii, Air Force Gen. Paul Selva, the vice chairman of the Joint Chiefs of Staff, told lawmakers July 18.

However, North Korea did not demonstrate the "capacity to strike the United States with any degree of accuracy or reasonable confidence of success," he said at the time.

But the Pentagon’s Defense Intelligence Agency has concluded that North Korea will be able field a reliable and nuclear-capable ICBM as early as next year, according to the Washington Post.

Unnamed U.S. officials familiar with the classified DIA assessment told the Post that North Korea has validated its basic weapons designs with the increased pace of testing in recent months and it could begin industrial production of ICBMs within a few months. Previously, the U.S. intelligence committee had predicted North Korea would be unable to strike the United States with a nuclear-tipped ICBM until 2020 at the earliest.

The Pentagon has previously provided President Donald Trump with military options against North Korea, but Dunford and other top military officials have warned of "horrific" consequences of those actions.

Dunford said Saturday at the Aspen Security Forum in Colorado that he supported continued efforts to impose stronger economic sanctions on the country.

“Ideally we will denuclearize the Korean peninsula [through] economic and political means,” he said. “In the meantime, I can assure the American people that our job is to develop military options in the event that that fails and be prepared to mitigate some of the consequences.”