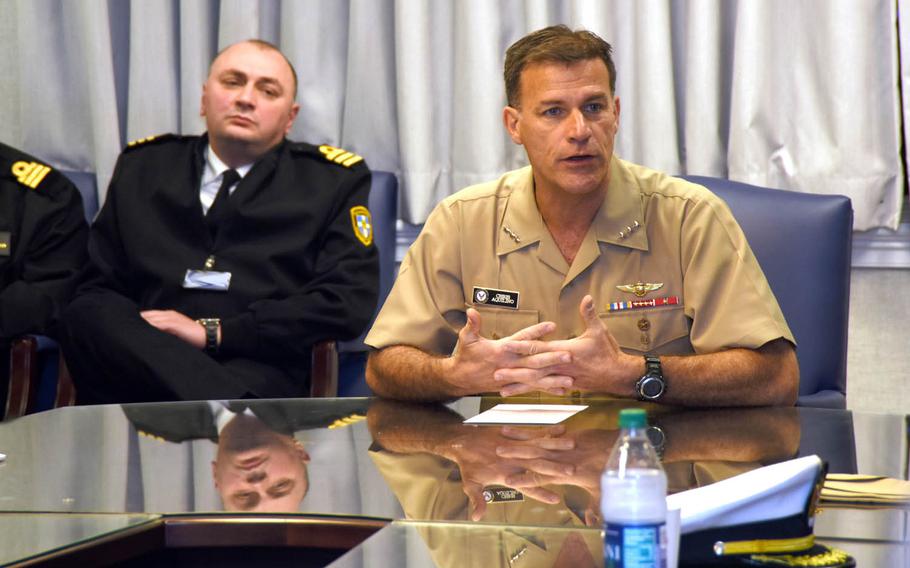 The Pentagon has nominated Vice Adm. John Aquilino to lead the Navy’s 5th Fleet, as naval forces in the region continue airstrikes against the Islamic State and face increased tensions with Iran.

Aquilino, who now serves as deputy chief of Naval Operations for Operations, Plans and Strategy, has been chosen to take over the Bahrain-based fleet, Defense Secretary Jim Mattis announced Friday in a statement. Aquilino would also assume command of Naval Forces Central Command.

If confirmed, Aquilino would take command of a fleet whose area of operations consists of roughly 2.5 million square miles of sea and includes the Arabian Gulf, Red Sea, Gulf of Oman, parts of the Indian Ocean and choke points at the Strait of Hormuz, the Suez Canal and the Bab el Mandeb strait at the southern tip of Yemen, according to 5th Fleet’s website.

Aquilino would also assume command of a force that is in a nearly three-year air campaign to eliminate ISIS as part of Operation Inherent Resolve. Naval forces in the region began the air campaign August 2014 when the aircraft carrier USS George H.W. Bush launched airstrikes against ISIS targets in Iraq.

The Navy announced in a press release last month that the carrier, which is on its second deployment in support of the operation, resumed its latest round of anti-ISIS strike missions June 6 after a several-month pause.

Naval forces have also faced several provocative acts at sea from Iranian forces that peaked in January 2016 after 10 US sailors were detained by members of the Iranian Revolutionary Guard Corps after their riverine patrol boats accidentally crossed into Iranian territorial waters.

Aquilino — a career fighter pilot who earned his wings in 1986 — has flown both the F-14 A/B Tomcat and the F-18 C/E/F Hornet, and is a graduate of the Navy Fighter Weapons School, also known as Top Gun, according to his official biography.

His command tours include serving as the commander for Strike Fighter Squadron VF-11, Carrier Air Wing 2 and the USS George H.W. Bush strike group. He has also served as director of Strategy and Policy at U.S. Joint Forces Command, deputy director for Joint Force Coordinator at the Joint Staff, and director of Maritime Operations at U.S. Pacific Fleet, his biography said.

Aquilino, who has deployed in support of both Operations Enduring Freedom and Iraqi Freedom, has completed more than 5,100 mishap-free flight hours and more than 1,150 arrested carrier landings, it said.