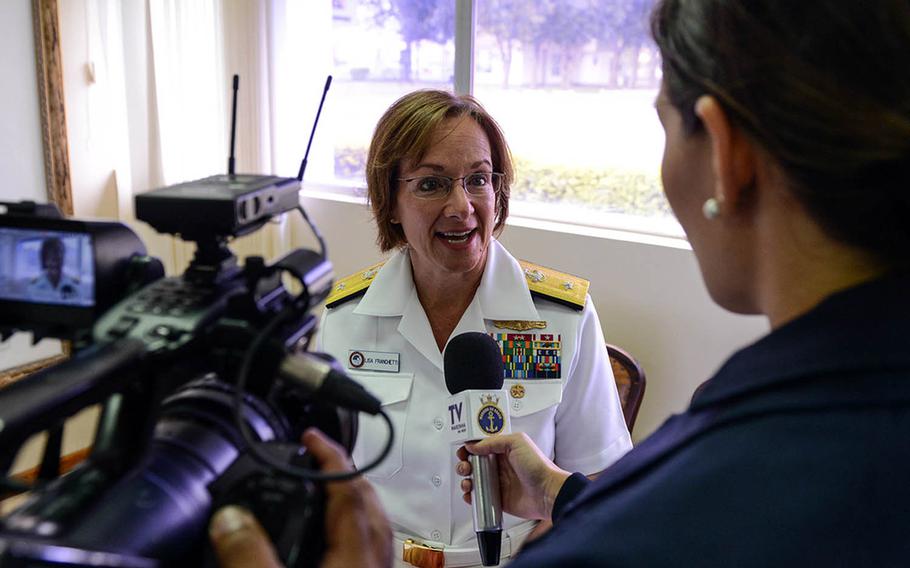 Rear Adm. Lisa Franchetti has been tapped by the Pentagon to lead the Navy's 6th Fleet. (Jonathan Nelson/U.S. Navy)

The Pentagon has tapped a former destroyer commander to lead the Navy’s Mediterranean fleet at a time of rising tensions with Russia and a growing terror threat in Africa.

Rear Adm. Lisa Franchetti, an adviser to the chairman of the Joint Chiefs of Staff, has been nominated to command the Naples, Italy-based 6th Fleet, the Defense Department said Tuesday. Confirmation would see her promoted to vice admiral and become deputy commander of Naval Forces Europe and Naval Forces Africa, a Pentagon statement said.

The 6th Fleet mostly operates in the Atlantic and around Europe and Africa — an area that’s home to more than 100 countries and a billion people.

The fleet has been busy lately dealing with increased Russian naval activity. Russian aircraft have been harassing U.S military planes and ships in the Black Sea in encounters the Pentagon has described as “unsafe and unprofessional.”

Russia is preparing to launch its most powerful ballistic-missile submarine, the Knyaz Vladimir, in November and will deploy two destroyers and a tanker around the Korean Peninsula and the South China Sea over the coming months in a show of force, media reports have said.

Last summer, China and Russia conducted a naval drill in which Chinese warships entered the Baltic Sea for the first time.

Meanwhile, U.S. forces appear to be stepping up counter-terrorism efforts in Africa. The recent deaths of four Green Berets in Niger drew attention to America’s growing involvement in the region.