Pentagon: No threats to US troops in Syria since strikes on Assad’s chemical weapons facilities 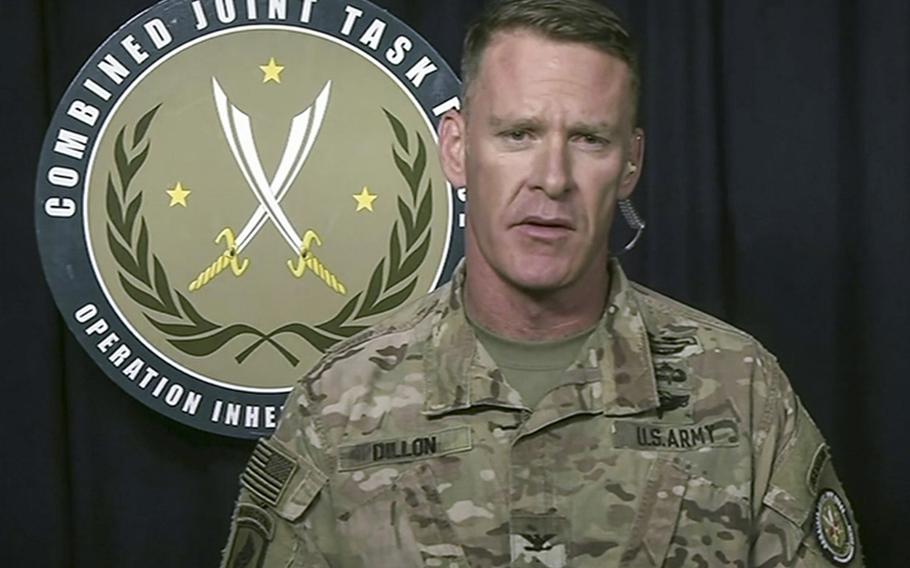 WASHINGTON – American troops in Syria have seen no signs of threats from forces backing President Bashar Assad since U.S., Britain and France planes and ships launched more than 100 missiles over the weekend at Syrian chemical weapons facilities, a U.S. military spokesman said Tuesday.

U.S. forces operating in Syria as part of a coalition to defeat the Islamic State in the country’s northern and eastern regions took precautionary steps to boost their self-defense capabilities ahead of and immediately following the strikes, said Army Col. Ryan Dillon, the Baghdad-based spokesman for the Operation Inherent Resolve coalition. As of Tuesday afternoon, the coalition had not observed any groups backing Assad make any aggressive moves in retaliation for the attack or issue any threats.

“We are constantly assessing the environment and continually watching and looking at where forces are on the battlefield and where their weapons are pointed,” Dillon told reporters at the Pentagon.

American, British and French ships and warplanes fired 105 missiles and struck a facility in Syria’s capital of Damascus and two others in the northern city of Homs where Pentagon officials said Assad’s regime had been developing, testing and storing illegal chemical munitions, including weaponized chlorine and sarin gas.

The attack, ordered by President Donald Trump, was in retaliation for Syrian troops alleged use of chemical weapons April 7 in an attack on civilians in the town of Douma, outside Damascus. That attack left more than 40 dead and hundreds more suffering, according to several human rights organizations that monitor Syria’s 7-year-old civil war.

Photos provided by the Pentagon show the facilities targeted were left in ruins, in some cases with nearby buildings appearing unscathed.

The United States has about 2,000 troops serving in Syria, where they primarily serve to train and advise the Syrian Democratic Forces, a militia of primarily Kurdish and Arab fighters pledged to destroying ISIS. Some Pentagon officials had acknowledged concerns that Assad’s forces – or those backing him, including Russian and Iranian troops – might retaliate for the strikes.

American troops and forces backing Assad have faced off in Syria previously, resulting in U.S. airstrikes, most recently in February when dozens of pro-regime fighters, including some Russian mercenaries, were killed in an American strike. Pentagon officials at the time said it was conducted in self-defense.

In a separate incident in June 2017, a U.S. Navy pilot flying an F/A-18 Super Hornet fighter jet shot down a Syrian Su-22 fighter after it dropped bombs near U.S.-backed SDF forces near Tabqa, in eastern Syria.

Such incidents, Dillon said Tuesday, prove to Assad’s forces that the United States will protect its troops and others that it is supporting.

“Our actions have spoken many times in the past and should … stand on their own to at least inform those elements who attempt to threaten us with rhetoric or even through reactions,” he said. “It will be a long day for them, should they do so.”