Pentagon: No decision yet on Afghanistan troop deployment 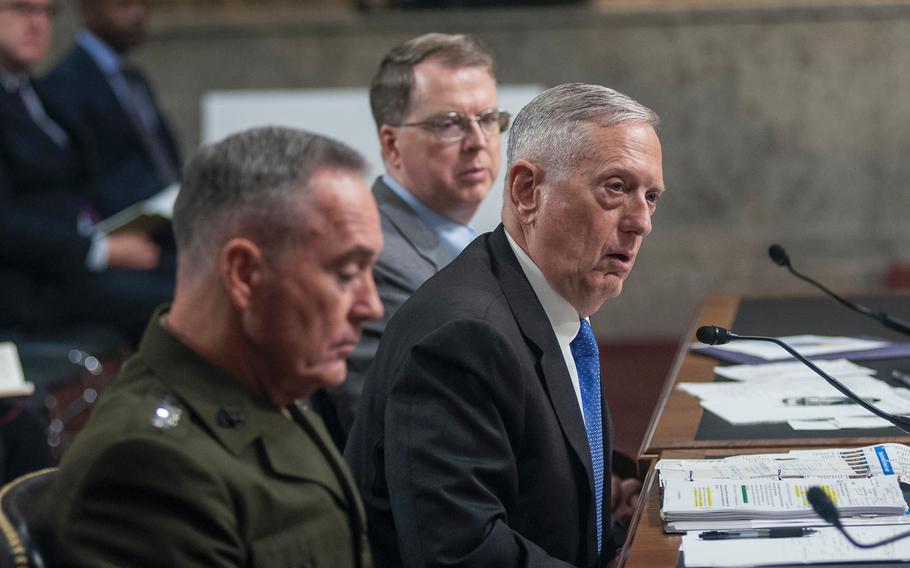 Defense Secretary Jim Mattis, center, testifies before the Senate Armed Services Committee on June 13, 2017, during a hearing on Capitol Hill in Washington, D.C. At left is Chairman of the Joint Chiefs of Staff General Joseph Dunford. (Carlos Bongioanni/Stars and Stripes)

WASHINGTON — Defense Secretary Jim Mattis has yet to decide how many additional American troops he will send to Afghanistan to bolster the deadlocked fight with Taliban and Islamic State insurgents under his revised strategy for the nearly 16-year war, Pentagon officials said Friday.

The Associated Press on Thursday reported Mattis would deploy about 4,000 new U.S. troops to Afghanistan in the near future. Several U.S. defense officials who have spoken on the condition of anonymity have said in the last few weeks that the Pentagon was considering an additional 3,000 to 5,000 troops for Afghanistan.

“Secretary Mattis has made no decisions on a troop increase for Afghanistan,” White said Friday in a prepared statement. “As he said throughout the week in testimony, the revised Afghanistan strategy will be presented to the president for his approval in the coming weeks.”

Marine Gen. Joseph Dunford, the chairman of the Joint Chiefs of Staff, and other Pentagon officials have said the number of American servicemembers deployed will be at least partially based on how many troops that NATO countries are willing to commit to Afghanistan. Several NATO nations, including the United Kingdom, have reportedly been considering adding additional forces to Afghanistan, though none have publicly announced their commitment.

Mattis told lawmakers this week on Capitol Hill that he expected to present the new Afghanistan strategy to Trump by mid-July. He testified to various House and Senate committees alongside Dunford on Monday, Tuesday, Wednesday and Thursday.

The defense secretary painted a grim picture of the situation in Afghanistan. Despite nearly 16 years of war, the Taliban has made inroads in several regions throughout the country in the last year and terrorist organizations including ISIS and al-Qaida remain active.

“We are not winning in Afghanistan,” Mattis told the Senate Armed Services Committee on Tuesday. “We will correct this as soon as possible.”

There are now about 8,400 American troops deployed to Afghanistan. NATO nations contribute another about 5,000.

Additional troops would primarily be used to bolster the NATO-led mission to train, advise and assist Afghan security forces, but some American troops also might be used in U.S. counter-terrorism operations, Mattis said.

In addition to more troops in Afghanistan, the Pentagon’s new strategy could include some changes to how U.S. troops operate in the country.

Mattis said Wednesday that his proposed strategy is likely to call for inserting NATO air controllers within Afghan units to make air response more effective against the Taliban or ISIS.

The fight against ISIS in eastern Afghanistan has taken a toll on American troops in 2017. All six U.S. servicemembers who have been killed in action this year were supporting anti-ISIS operations in the restive Nangarhar province.

On Saturday, three members of the 101st Airborne Division, Sgt. Eric M. Houck, 25, Sgt. William M. Bays, 29, and Cpl. Dillon C. Baldridge, 22, were killed when one of the Afghans who they were advising in an anti-ISIS operation opened fire on them. The Taliban has claimed responsibility for that attack.