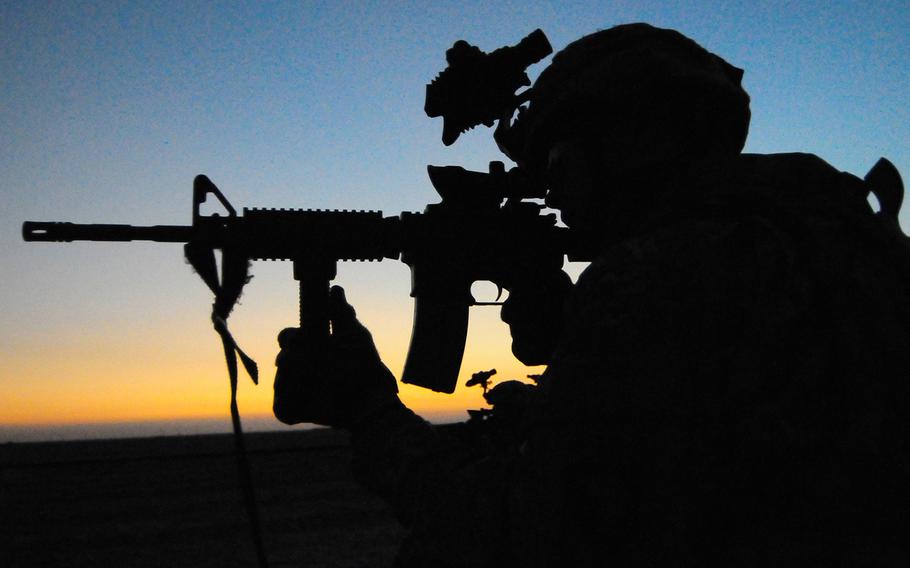 WASHINGTON — The Pentagon is considering a recommendation that conventional ground forces be sent to Syria as part of a package of options to be presented this month to President Donald Trump to accelerate operations against the Islamic State group, according to defense officials and media reports.

Citing unidentified sources, CNN reported Wednesday that top military planners were debating whether to include such a proposal in a report that Trump ordered Jan. 28. The New York Times and The Associated Press published similar reports last month.

A Pentagon spokesman, Navy Capt. Jeff Davis, would neither confirm nor deny the reports.

“We are considering a number of measures to accelerate the campaign as part of that review, but no decisions have been made,” Davis said.

He added Defense Secretary Jim Mattis “is actively engaged with his combatant commanders and commanders on the ground to listen to their recommendations and to provide them with the resources and authorities they need to hasten the defeat of” the Islamic State group.

Other Pentagon officials indicated Thursday that discussions of a ground-troop option had been held during planning sessions but it would be “very speculative” to conclude it would be in the final report to the White House.

The officials spoke on condition of anonymity because of the sensitivity of the subject.

The United States is relying now largely on the predominately-Kurdish Syrian Democratic Forces to fight the Islamic State group on the ground in Syria.

While the U.S. military has deployed conventional forces into Iraq to help Iraqi security forces in its battle against the terrorist group, it has only sent small teams of special operators into Syria. Those special operators – the United States has approved up to 500 in Syria -- have been tasked primarily with training and advising the Syrian Democratic Forces and rebel forces aligned with NATO-ally Turkey.

Trump has pledged since he was a candidate to ramp up operations against the Islamic State group, criticizing the scale of the campaign under President Barack Obama.

On Jan. 28, Trump gave the Pentagon 30 days to draft “a comprehensive strategy and plans for the defeat of” the Islamic State group. A presidential memorandum called on war planners to recommend possible changes to U.S. polices and rules of engagements, to identify additional coalition partners to participate in the campaign and find ways to delegitimize the terrorist group’s presence online.

So far, no major operational changes have occurred in the fight in Syria and Iraq since Trump took office Jan. 20, the Pentagon said Thursday.

Since November, the Syrian Democratic Forces has been marching toward the Islamic State capital of Raqqa and has nearly isolated the Syrian city. The group -- in addition to Kurdish YPG forces, includes the Syrian-Arab Coalition of Arabs, Turkmen and Christian fighters – has liberated more than 1,500 square miles of territory north of Raqqa and freed “tens of thousands of people,” British Maj. Gen. Rupert Jones, deputy commander of the Operation Inherent Resolve coalition in Baghdad, said Wednesday.

Operations to attack Raqqa could begin soon, Jones said. He added the United States and its coalition partners are negotiating who would participate in that assault, which could be adjusted once the Pentagon submits its new plan to Trump.

“The enemy is under pressure on all fronts,” the general said. “… The conditions are almost set for the liberation of Raqqa and [the Islamic State group] knows it.”