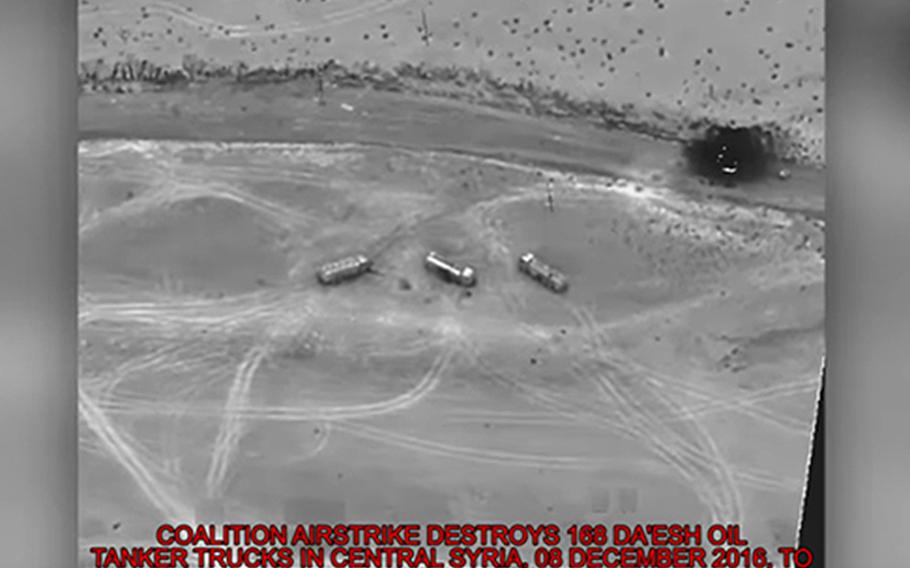 A file photo shows the aftermath of a coalition airstrike against Islamic State oil tankers near Palmyra, Syria, Dec. 8, 2016. (DOD)

WASHINGTON – The Islamic State group has lost almost all access to Iraqi oil, though the terrorist organization has thousands of fighters protecting its remaining oil-rich territory in Syria, a U.S. defense official said Wednesday.

The official, who briefed reporters at the Pentagon on the condition of anonymity, said there are roughly 15,000 Islamic State fighters left in Iraq and Syria. About half of them are in or near Mosul or Raqqa, the terrorist group’s two remaining urban strongholds in Iraq and Syria, respectively.

The remaining Islamic State fighters are concentrated along the Euphrates River Valley in eastern Syria, where the group is still able to extract and sell oil, the official said.

For months, airstrikes by the U.S.-led coalition have targeted the group’s oil assets, destroying tanker trucks and distribution facilities under Operation Tidal Wave II, named after the 1943 attack in World War II by Allied forces to bomb German oil refineries in Romania. In December, for example, Operation Tidal Wave II destroyed 168 Islamic State oil trucks near Palmyra, eliminating an estimated $2 million in oil revenue, the Pentagon announced at the time of the strike.

“Their [the Islamic State group’s] largest cash revenue is still an ability to extract oil and gas and to refine and sell it,” the official said, noting the terrorist group is still able to generate funds by taxing the local population, and has cash reserves seized from captured territory.

“They still possess large numbers of basic arms and ammunition and explosive material,” the official said. “When the Iraqi army fell, [the Islamic State group] were able to seize many weapons that were in armories and a lot of ammunition. So they’ve not had to make purchases of those kinds of materials. So I think that’s part of how they are able to sustain themselves on diminishing financial resources.”

Iraqi forces have cleared much of Mosul, and local Syrian forces working with the U.S.-led coalition are working to isolate Raqqa, the Pentagon has previously said. The defense official who briefed reporters Wednesday said there will be more battles against the Islamic State group after Raqqa and Mosul are recaptured. The official expected most major population centers in Iraq would be cleared of the Islamic State group in six months.