Pentagon: Islamic State down to 350 fighters in Sirte, Libya 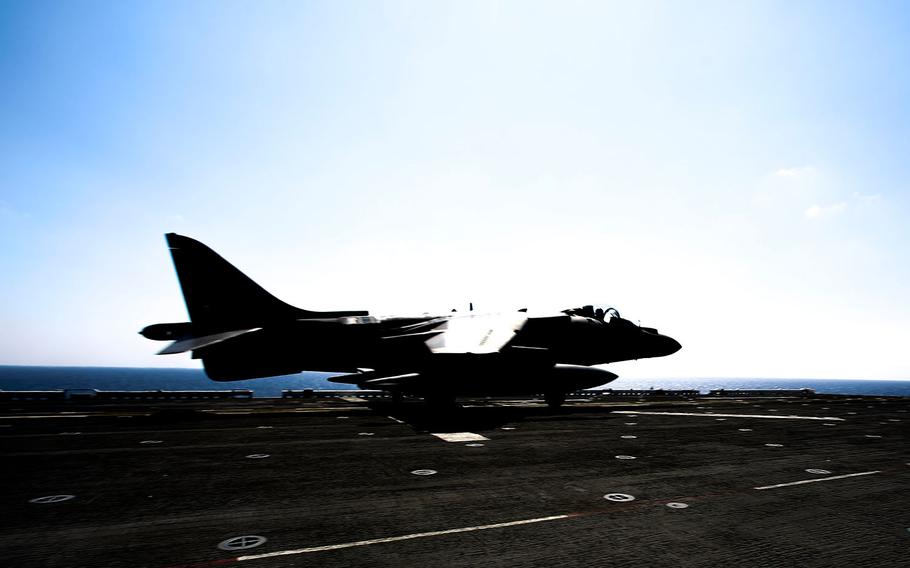 An AV-8B Harrier II with 22nd Marine Expeditionary Unit, takes off from the flight deck of the USS Wasp (LHD 1) on Aug. 1, 2016. The 22nd MEU, embarked on the Wasp, is conducting precision air strikes against Islamic State targets in Sirte, Libya. (Ryan G. Coleman/U.S. Marine Corps)

WASHINGTON – Only about 350 Islamic State fighters remain in the all-but-abandoned Libyan coastal city of Sirte as the United States finished its eighth day of airstrikes there, U.S. defense officials said Tuesday.

The United States, as part of Operation Odyssey Dawn, began targeting Islamic State vehicles and fighting positions Aug. 1. Since then, unmanned aircraft launching from undisclosed locations and Marine AV-8B Harrier jets taking off from the nearby USS Wasp, an amphibious assault warship, have conducted 28 strikes against the terrorist group, according to U.S. Africa Command and defense officials who spoke on the condition of not being named.

More than half of the strikes have been conducted from unmanned aircraft, one of the defense officials said.

Sirte, once a city of 80,000 people, has about 1,000 residents remaining, the defense official said. Islamic State militants there totaled up to 1,000 fighters at one time. But their numbers have dwindled as well and many of them have moved outside Sirte to the south or blended back into the civilian population, the official said.

Since the airstrikes began last week, U.S. and Libyan forces have worked together to identify targets and allow pro-government forces to retake parts of southeast Sirte.

“A small number of U.S. forces have gone in and out of Libya to exchange information with local forces, and they will continue to do so as we strengthen the fight against [the Islamic State group] and other terrorist organizations. These personnel will not be engaged in fighting [the Islamic State group,]” said Henrietta Levin, a defense spokesperson.

With the support of the airstrikes, Libyan forces have been able to retake most of the al-Dollar district in Sirte, near the same conference center where the final surrender of forces loyal to Moammar Gadhafi took place in fall 2011.

Civil war has raged in Libya since that time. In 2015, Islamic State fighters took control of Sirte.