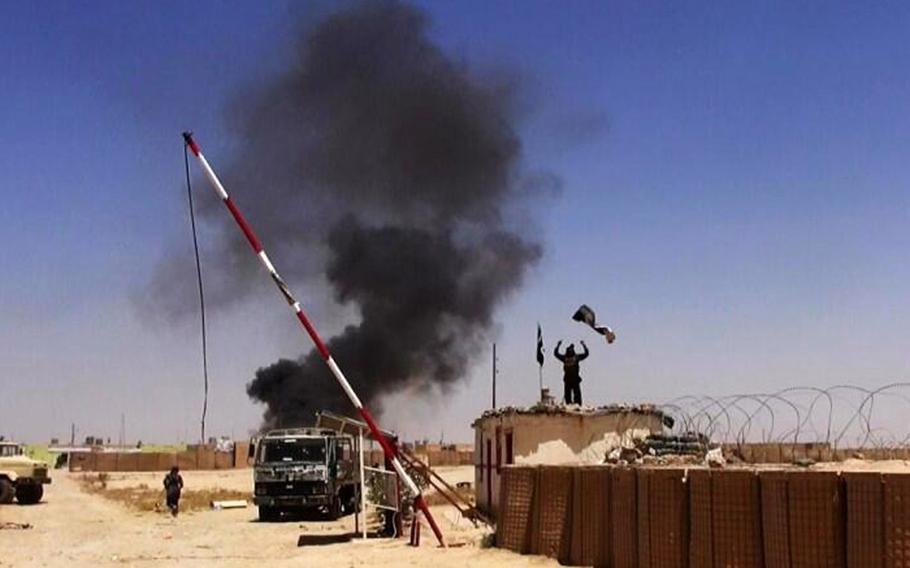 This file image posted on a militant news Twitter account on Thursday, June 12, 2014 shows people from the al-Qaida-inspired Islamic State of Iraq and the Levant (ISIL) raising their flag at the entrance of an army base in Ninevah Province, Iraq. (albaraka_news)

WASHINGTON — After crumbling in the face of attacks by Islamic militants, Iraqi security forces are now increasing their resistance, according to the Defense Department.

“We’re seeing indications certainly that Iraqi security forces in and around Baghdad are stiffening themselves. They’re being assisted by Shia militia members. And it certainly appears as if they have the will to defend the capital,” Pentagon Press Secretary Rear Adm. John Kirby told reporters Tuesday.

Over the past week, fighters with the Islamic State of Iraq and the Levant have taken over large swathes of northern Iraq, as members of the Iraqi military fled their posts and abandoned their equipment. The rebels have now moved within 35 miles of Baghdad, according to reports.

Leaders of ISIL have indicated that they would like to take the capital, and Kirby acknowledged that there are ISIL elements “not very far from Baghdad.”

In response to calls by religious leaders and the Iraqi government, Shia militias have formed to supplement the Iraqi army after its poor performance against the militants.

“We have indications that they are that they are finding common cause with the Iraqi security forces in this regard,” Kirby said.

Heavy clashes between Iraqi forces and ISIL militants have reportedly taken place in the city of Baqouba, about 40 miles north of Baghdad.

Kirby called the stiffening resistance “encouraging.” However, the U.S. government doesn’t appear to be counting on the Iraqi forces to be able to fend off an assault on the capital by themselves.

Over the weekend, the U.S. military deployed about 160 troops to beef up security at American diplomatic facilities in Baghdad. Approximately 100 more have been staged outside Iraq as a “contingency force” that could go into Iraq if necessary, according to Kirby. This contingency force is “proficient” at airport management and security, Kirby said.

Kirby would not identify the country where the 100 troops have been staged.

In response to a question by a reporter, Kirby said that the Army periodically deploys a rotational brigade to Kuwait, and that force is “available for a range of missions.”

On Friday, President Barack Obama said that he was weighing the possibility of taking military action against ISIL, although he has ruled out sending ground forces into Iraq for combat missions.

In recent days, the Pentagon has deployed the aircraft carrier USS George H.W. Bush, the guided-missile cruiser USS Philippine Sea, the guided-missile destroyer USS Truxtun, and the USS Mesa Verde transport with about 550 Marines and MV-22 aircraft onboard, to the Persian Gulf for a potential Iraq contingency.

Kirby said he is not aware of any other deployments of additional transport or strike aircraft to the region in recent days. He had previously said that the military has airlift assets “at the ready” in case the State Department requests an evacuation of embassy staff or other Americans.

Kirby reiterated that no decisions have been made about the potential use of military force.

“Everybody on the national security team understands the sense of urgency there in Iraq and the seriousness of the threat … [but] it’s about making measured deliberate decisions that make the most sense,” Kirby said. “Believe me, everybody has noticed the speed with which ISIL has moved inside Iraq. But that doesn’t mean that you rush to a decision.”