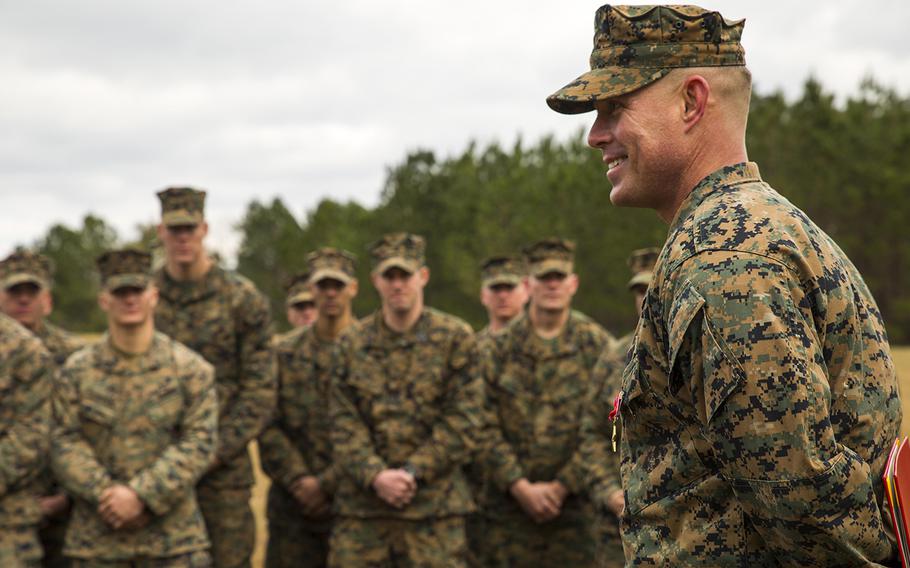 U.S. Marine Staff Sgt. Nathan A. Hervey speaks at Marine Corps Base Camp Lejeune, N.C., Feb. 5, 2016. Hervey was awarded the Bronze Star Medal with the combat distinguishing device for valor. New regulations will see the authorization of "C" and "R" devices to be added to some awards. (Fatmeh Saad/U.S. Marine Corps)

WASHINGTON — The Pentagon has updated its criteria for combat awards, including establishing two new letter devices aimed at distinguishing the genesis of certain awards earned for service in a combat zone or for engaging an enemy through remote actions.

The new combat “C” and remote “R” devices were implemented in a recent Pentagon directive that followed a yearlong internal review of the Defense Department’s awards system. Like the longstanding “V” device for valorous actions, the new quarter-inch gold devices will be worn on battle ribbons for specific awards.

The services have through the end of 2017 to implement the new award devices, which can be administered retroactive to January 2016. The Army stated in a March 15 memorandum that it has already implemented the new devices, though the Awards and Decorations Branch has yet to receive a request for any.

The new policy is designed to better define criteria for awarding combat awards and seeks to provide better distinction for recognizing acts of valor, which is described as “the top priority of the DOD Military Decorations and Awards Program,” in the Pentagon directive.

The “V” device will continue to be issued on valor awards less than the Silver Star – the Distinguished Flying Cross, Bronze Star, Air Medal, Joint Service Commendation Medal and service-specific Commendation Medals – for singular acts of combat heroism against an enemy. The Pentagon’s new directive removed authorization for the “V” device for two awards – the Legion of Merit and the service-specific Achievement Medals.

The new “C” device is intended to recognize overall achievement under “combat conditions,” where the individual was exposed to hostile action or significant risk, according to the Pentagon.

The “R” device seeks to recognize servicemembers who have a “direct hands-on” impact against enemy combatants without exposing themselves to hostile actions or significant risk, such as drone pilots and cyber warfare specialists, according to the directive.

The Pentagon’s description of the “C” device states “although such performance does not rise to the level of valor, it deserves to be distinguished from performance in peacetime or other situations where servicemembers are not directly exposed to hostile action or the significant risk of hostile action,”

In many cases, the “C” device is likely to be used as a so-called “end of tour” award when a person has performed meritoriously in their duties during a combat deployment, a defense official said on the condition of anonymity because he was not authorized to discuss the changes.

The official said the change could have the largest impact on awarding of the Bronze Star without a combat “V” device. The new directive tightens the criteria for the Bronze Star, limiting it to meritorious service under “combat conditions.” For achievement during a deployment where a servicemember was not subjected to potential harm, commanders could now choose to award a Meritorious Service Medal instead of a Bronze Star, the official said.

The Bronze Star is not eligible for a “C” or “R” device.

To earn a “C” device, the Pentagon directive stated a servicemember must be engaged against an enemy, engaged in military operations against an opposing foreign force or serving with friendly forces engaged in an armed conflict in which the United States is not a principal party.

The “R” device is intended to recognize the contributions drone operators and cyber warfare specialists contribute to the fight, the defense official said. While drone pilots who conduct airstrikes are eligible, pilots conducting only intelligence, reconnaissance and surveillance missions are not.

The device follows the Distinguished Warfare Medal, an award for drone pilots established in 2013 by then-Defense Secretary Leon Panetta and was quickly scrapped by his successor Chuck Hagel and mocked by some people in the defense industry as the “Nintendo Medal.”

To earn an “R” device, a servicemember must perform a direct action from a remote, non-hostile location against an enemy of the United States, engage in operations against an opposing foreign force or serve with friendly foreign forces engaged in military operations with an opposing armed force in which the United States is not a belligerent party.

The “R” device is not authorized for sustained meritorious service, it is only to be awarded for specific actions, the Pentagon directive stated.