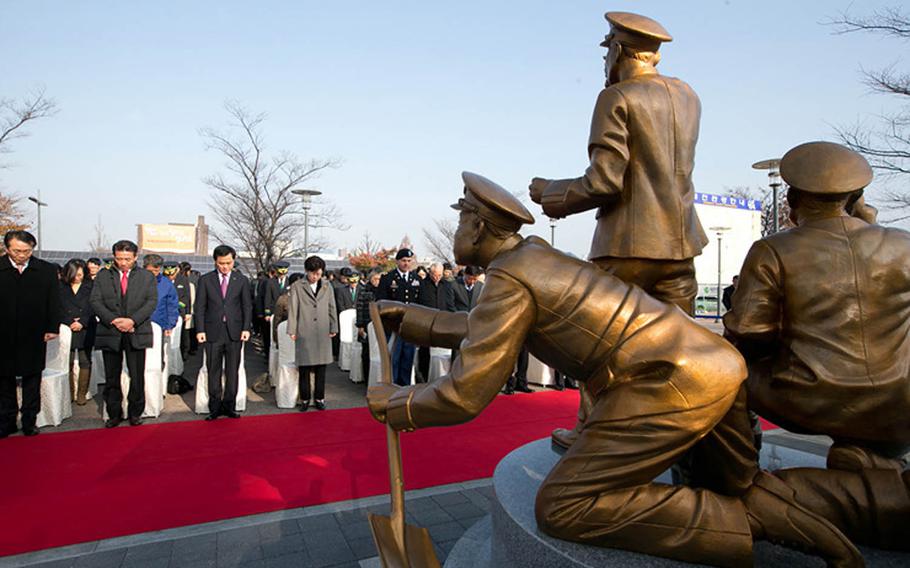 Officials bow their heads Tuesday, Dec. 1, 2015, in memory of three railroad workers who participated in an attempt to rescue U.S. troops behind enemy lines during the Korean War. Each of the workers has received posthumous awards from the Pentagon for his service. (Courtesy of KORAIL)

Officials bow their heads Tuesday, Dec. 1, 2015, in memory of three railroad workers who participated in an attempt to rescue U.S. troops behind enemy lines during the Korean War. Each of the workers has received posthumous awards from the Pentagon for his service. (Courtesy of KORAIL) 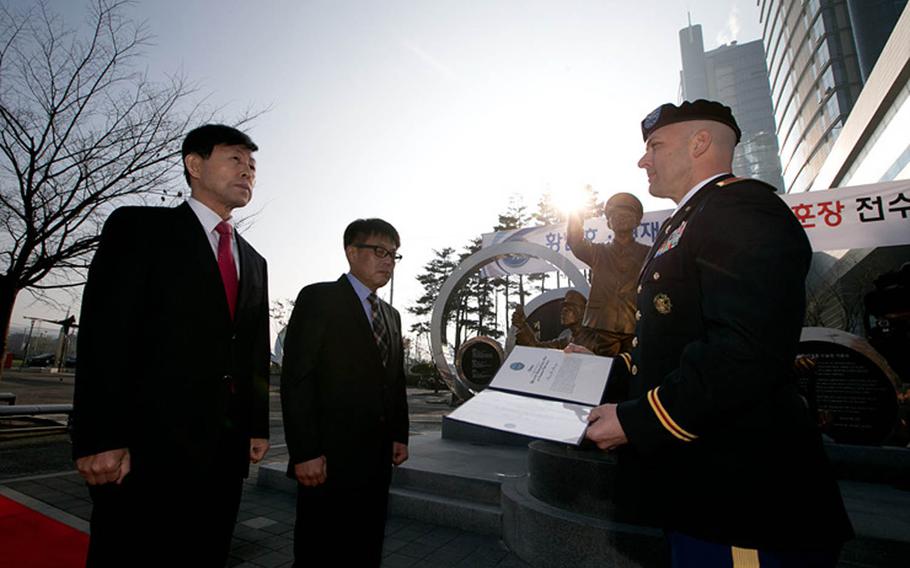 Col. Scott Shore, 8th Army deputy chief of staff, presents a posthumous Pentagon award Tuesday, Dec. 1, 2015, to family members of a South Korean railroad worker who took U.S. troops on a mission behind enemy lines during the Korean War. Three workers from the July 1950 mission have now been recognized for their actions. (Courtesy of KORAIL)

Two train workers who risked their lives in an ill-fated attempt to rescue U.S. troops during the Korean War received honors Tuesday from the Pentagon in Daejeon, South Korea.

Hwang Nam-ho and Hyun Jae-young were posthumously awarded the Secretary of Defense Medal for Exceptional Public Service for helping to guide a train carrying about 30 troops through enemy territory on July 19, 1950, in a bid to reach forces cut off by a North Korean advance.

Hwang and Hyun were among the few survivors of the rescue mission, which nevertheless made it to Daejeon on the bullet-riddled train, according to KORAIL, the Korea Railroad Corp.

The train’s lead conductor, Kim Jae Hyun, died from multiple wounds and received the same award from the Pentagon in 2012.

On Tuesday, Hwang's and Hyun’s relatives accepted the awards on their behalf in front of Patriotic Railroad Square, where statues of the three men stand. U.S. military officials and railroad company representatives were on hand to honor the wartime workers.

“I hope these DOD awards will motivate (everyone) to inspire patriotism in our lives and give forgotten railroad heroes’ service and contributions wide publicity,” said Choi Yeon Hye, KORAIL’s president, according to a speech transcript. “I also hope this is a big comfort to their bereaved families.”

KORAIL submitted documentation on Hwang's and Hyun’s efforts to the Pentagon earlier this year, with help from U.S. Forces Korea officials, according to a company statement.

More than 19,000 train drivers participated in military transport operations during the war, with 287 killed in action, South Korean military officials said in 2012.

Stars and Stripes staffer Yoo Kyong Chang contributed to this report from Seoul.