Pentagon hazy on legality of pot company investments for servicemembers 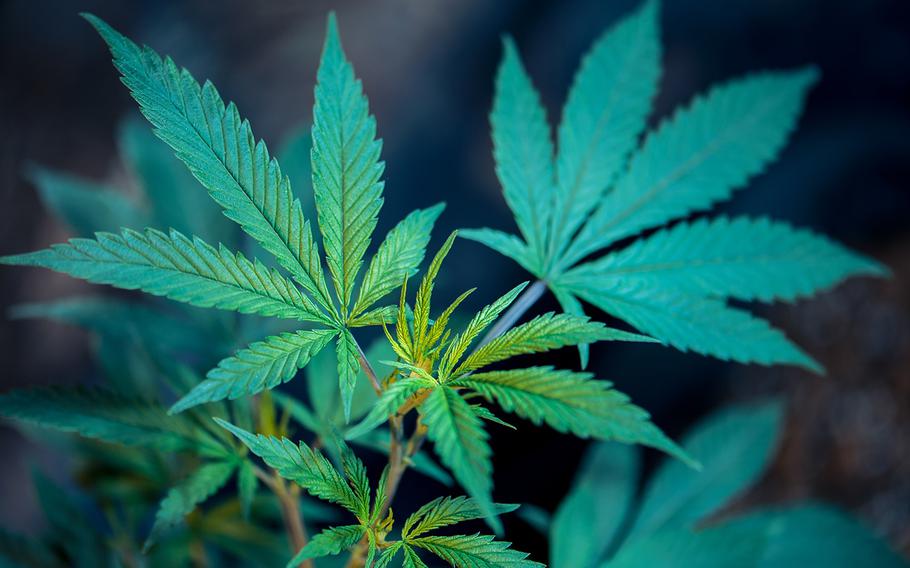 A marijuana plant in the vicinity of Polk County, Ga. Investing in marijuana has become a thorny ethics question for Defense Department employees. (Roberto Valdivia/Unsplash)

The Air Force Ethics Office has instructed legal offices to “stand by” for guidance on the legality of marijuana investments from the Pentagon’s Standards of Conduct Office, according to an email posted on a popular social media site Tuesday.

“Please continue to stand by — I know there are lots of emails floating around on this issue,” wrote Shannon A. McGuire, the Air Force’s associate general counsel for fiscal, ethics and administrative law, in the email shared on the “Air Force amn/nco/snco” page. The email’s authenticity was not immediately confirmed, though it did include accurate agency contact information.

The email comes amid confusion over how ownership of pot-related businesses might affect determinations of suitability for federal employment and security clearance adjudication for the Pentagon’s civilian and military workforce, given pot’s unique legal status — still classified as illegal under federal law but allowed for recreational or medical use in many states.

The uncertainty surrounding the issue has arisen from recent guidance circulated within the Defense Department and in conflicting news reports.

While federal law and DOD policy remain opposed to possession, use, manufacture, sale or distribution of pot, rapid changes to the burgeoning quasi-legal weed industry have raised questions among those looking to invest early into the “Amazon of pot.”

Adding to the confusion is the fact that some investors — including servicemembers participating in the Thrift Savings Plan — may hold shares of companies invested in pot-related businesses without knowing it. The federal government also may be indirectly invested in the industry through the company it hired to manage the TSP and retirement investment funds.

Marijuana’s status as an investment garnered wider attention last month, when the “Air Force amn/nco/snco” page posted a screenshot of an earlier Air Force email citing the DOD’s Consolidated Adjudication Facility, which reviews security clearance investigations. It stated that investment in marijuana businesses could be interpreted as prohibited “involvement” with the illegal drug, including if a person’s brokerage purchased stock in a pot-related company.

But the DOD interpretation cited in that email is not an official policy, a Pentagon spokeswoman told Stars and Stripes, after news outlets began reporting on the Facebook post.

Marijuana is still listed on Schedule I of the federal Controlled Substances Act, meaning it’s illegal to knowingly or intentionally possess it, despite 10 states having legalized its recreational use and 33 legalizing it for medical purposes.

An executive order bars federal employees from using illegal drugs and “involvement with marijuana” may be considered when agencies hire, Katharine Archuleta, then-director of the Office of Personnel Management, said in a 2015 memo to the heads of executive departments and agencies.

“Drug involvement can raise questions about an individual’s reliability, judgment, and trustworthiness or ability or willingness to comply with laws, rules, and regulations,” Archuleta wrote. “An individual’s disregard of Federal law pertaining to marijuana remains adjudicatively relevant to suitability determinations and relevant for disciplinary actions.”

But military legal offices seem unsure what that means for investors who serve in the military or belong to the Pentagon’s civilian workforce.

The legal office at Ramstein Air Base, Germany, declined to comment on whether investing in marijuana businesses violated the Uniform Code of Military Justice, which bars the use, possession, manufacture, distribution and import or export of pot into the U.S.

The Area Defense Counsel at the base said more research would be required on the matter.

But last week, a security manager with the Defense Media Activity sent an email to agency personnel, citing the Substance Abuse and Mental Health Services Administration and urging that personnel “should err on the side of caution” before investing in a pot dispensary or “any other entity dealing with marijuana,” though it said there was no definitive guidance on the matter.

“Our interpretation and reasoning is that investing in a dispensary as a part of a mutual fund that is unknown to the individual is mitigatable. Individuals should not intentionally invest in a marijuana dispensary,” the email said.

Adjudicators should consider the circumstances surrounding a person’s conduct, including whether they knowingly participated, and conduct must be evaluated on a case-by-case basis, the email said.

What exactly constitutes investment in an “entity dealing with marijuana” or buying stock in a pot-related company has not been clearly defined.

The industry’s growth means servicemembers and civilians with TSP accounts, individual retirement accounts or mutual funds may already be invested in marijuana.

Along with advising legal offices to stand by, the email attributed to McGuire included a list of “companies relating to marijuana investments,” which included Constellation Brands, the distributor of Corona beer. Constellation bought a stake in Canopy Growth Corp., a publicly traded cannabis and hemp company, and is reportedly developing cannabis-infused drinks.

Also listed is Scotts Miracle-Gro, a producer of fertilizer and other lawn and garden products. The document links it to pot through its hydroponics equipment. Hydroponics, a process of growing plants without soil, is a popular technique for growing marijuana.

The federal government itself may be backing the pot industry. BlackRock Inc., the parent company of the firm that manages four TSP index funds, reported this month that it owned more than 1.3 million shares, or 14 percent, of Innovative Industrial Properties, a company that provides real estate capital for the medical cannabis industry.

It’s unclear whether the TSP index funds themselves include investments in publicly traded pot companies. A spokeswoman for the federal retirement program could not immediately say whether such stocks were omitted from the funds.