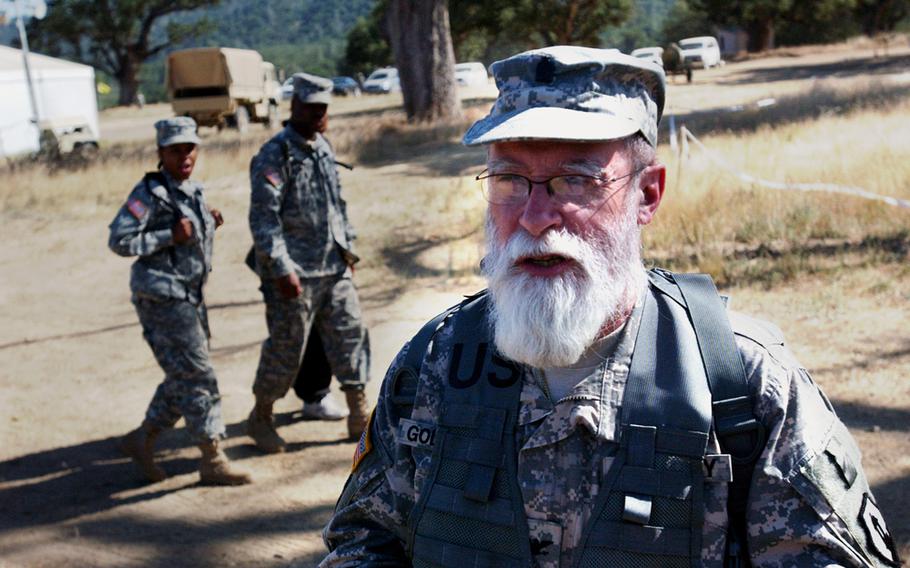 Army Chaplain Col. Jacob Goldstein, a Jewish rabbi, is pictured in uniform with his beard, in accordance with his faith, at Fort Hunter Liggett, Calif., in July 2010. (Joseph Bitet/U.S. Army)

Army Chaplain Col. Jacob Goldstein, a Jewish rabbi, is pictured in uniform with his beard, in accordance with his faith, at Fort Hunter Liggett, Calif., in July 2010. (Joseph Bitet/U.S. Army) 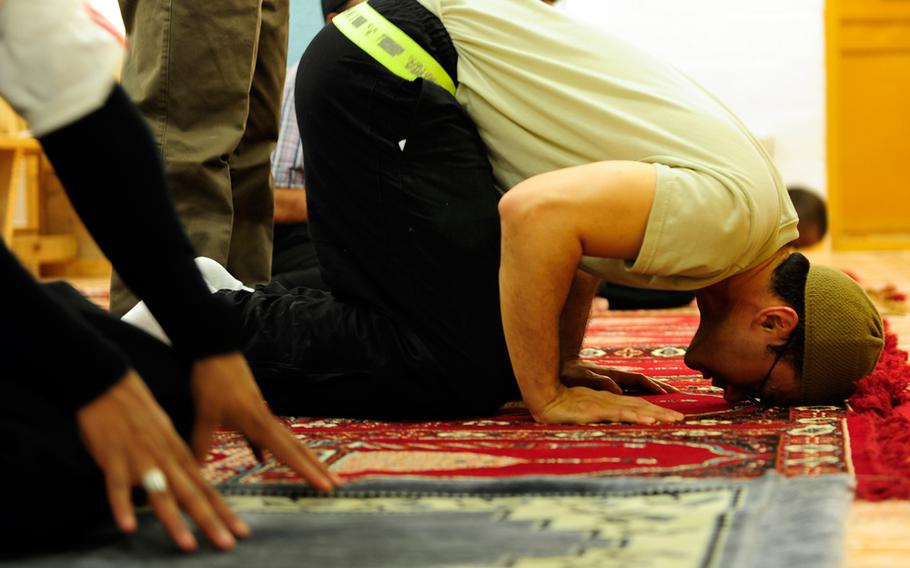 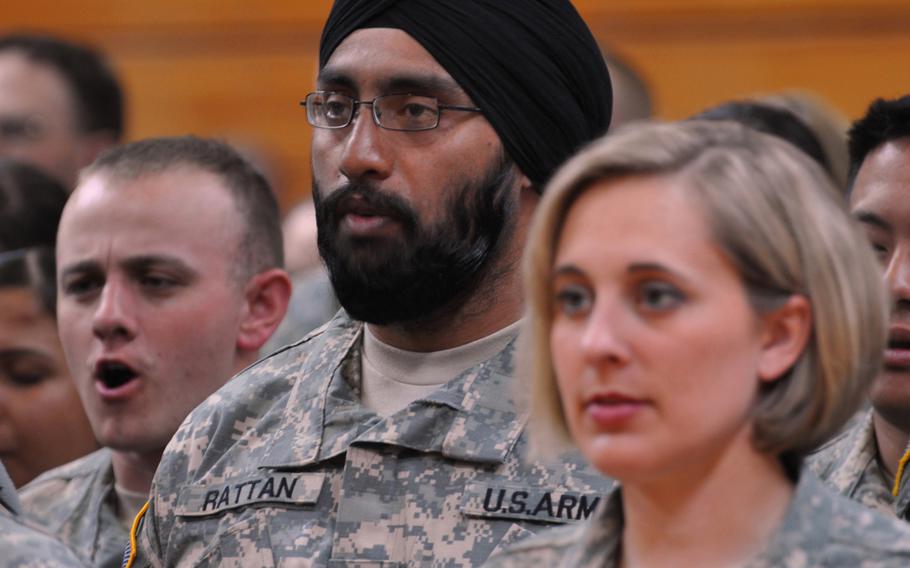 Capt. (Dr.) Tejdeep Singh Rattan joins his graduating class in singing 'The Army Goes Rolling Along' during the Basic Officer Leadership Course graduation ceremony in 2010, at Fort Sam Houston, Texas. If requests 'reflect sincerely held beliefs' and 'don’t harm readiness, unit cohesion or good order and discipline,' beards, turbans and other signs of spiritual devotion will be approved by the military under a new policy by the Pentagon. (Courtesy of U.S. Army)

WASHINGTON — A clean shave and a boot-camp buzz cut are no longer mandatory for adherents of religions whose grooming practices differ from those traditionally required by the U.S. military.

The Pentagon announced Wednesday that beards, turbans, religious body art and other previously off-limits manifestations of spiritual devotion can now be allowed throughout the military. The policy also OKs other religious practices not related to appearance.

In the past, servicemembers occasionally managed to obtain exemptions to policies for religious reasons, but there was no single set of guidelines; the new policy says accommodations will approved unless the military demonstrates a compelling reason to deny the request.

The requests for religious accommodation should “reflect sincerely held beliefs” and not damage military readiness, unit cohesion or good order and discipline, according to a revised Defense Department instruction on accommodation of religious practices.

The policy has its limits, but is designed to allow troops free expression of their religion, as required by Congress in the 2013 National Defense Authorization act, a spokesman said. Jews, Sikhs and Muslims in the military — who together comprise less than 1 percent of the active-duty military, according to a DOD tally based on self-reporting — are among those who in recent years have sought greater latitude to comply with their religions.

The U.S. Commission on Civil Rights in December sent a letter to Defense Secretary Chuck Hagel about department policies it said “may result in the unnecessary exclusion of Sikh Americans and Americans of other religious faiths from military service based on their religious beliefs manifested in their dress and grooming.”

Requests for accommodation that don’t conflict with standing DOD policies — such as allowing troops to engage in prayers required by their religion throughout the day — can be dealt with by immediate commanders, he said.

Others that butt up against existing policies, such as the wearing of beards or headgear, will need waivers issued by military department secretaries, or by military officers no lower than heads of personnel and manpower for each service.

A group of high-ranking military chaplains and officials from DOD and religious organizations that work with troops will appear Wednesday before the House Armed Services Committee to discuss the Pentagon’s implementation of legislation requiring the military to make religious accommodations for servicemembers.

Reaction to the policy Wednesday was diverse and intense.

Rabbi Sanford Dresin, director of military programs at the Aleph Institute, a Jewish non-profit organization that advocates for military members and prisoners, said he was surprised and cheered by the new policy. The institute recently waged a successful legal battle to win a Jewish chaplain’s right to wear a full beard.

“If this is all true, I’m ecstatic to say the least,” he said. “I think it demonstrates sensitivity and respect for multiculturalism.”

Dresin said he was gearing up to contend with the Marine Corps over the right of Jewish Marines to wear yarmulkes, headwear many Jews feel their religion requires them to wear. He said he now hopes the new policy makes the effort unnecessary.

“There remains a shortage of Jewish chaplains in the military and I feel that I will be able to provide additional chaplains if this is the case,” he said.

But Mikey Weinstein, president of the Military Religious Freedom Foundation — which battles what he describes as fundamentalist Christian domination of the military — said the relatively small numbers of non-Christian practitioners who benefit from the new rules would be dwarfed by the number of Christians who use it as cover to try to impose their belief system.

DOD will find it harder to fight the spread of homophobia, anti-Islam sentiment, misogyny and anti-Semitism with the new policy, he predicted.

“Far from this being all about beards and turbans for Sikhs or yarmulke for Jewish personnel, I am concerned over a potential for a new tsunami of fundamentalist Christian oppression and tyranny from superiors to their subordinates,” Weinstein said.

Ron Crews, executive director of the Chaplains Alliance for Religious Liberty, an evangelical group that often takes issue with Weinstein, welcomed the ruling.

He said the organization’s members are concerned that with recent changes in DOD policies governing open service of gays in the military and allowing benefits for same-sex spouses, they would be limited in expressing their faith’s teachings on homosexuality. The new ruling provides some assurance, he said.

“Our initial response is that we are grateful that DOD is taking seriously Section 533 that was passed in the FY13 NDAA,” he said. “And we’re wanting to make sure that military members are able to exercise their religious liberties without any fear of recrimination.”