Pentagon deploys thousands of troops as flooding from Florence worsens 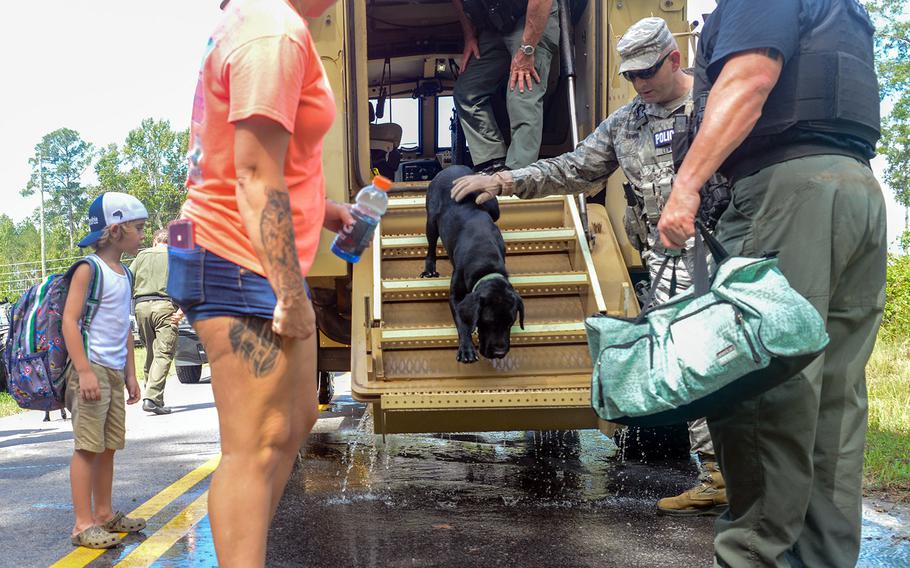 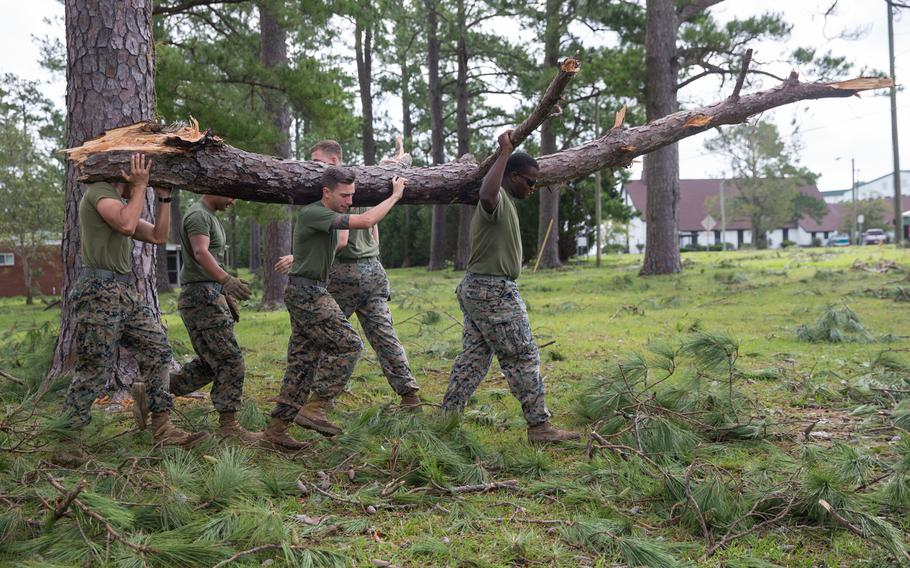 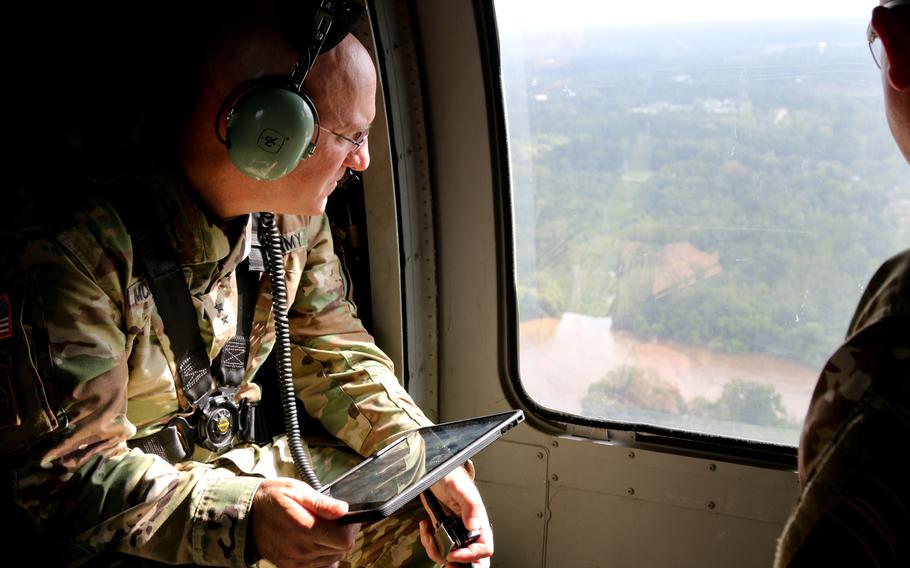 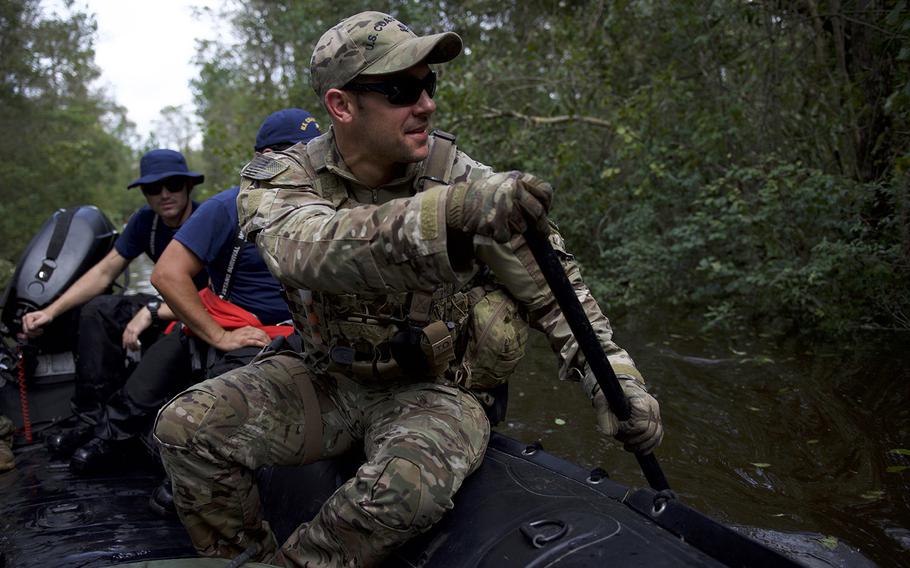 WASHINGTON – The Pentagon has sent some 13,000 servicemembers to areas impacted by Hurricane Florence in North and South Carolina where they are charged with search and rescue and other operations as flooding worsened throughout the region Monday.

National Guard members from both states have conducted more than 60 operations, including about 35 search, rescue and safety missions, since the deadly storm made landfall as a category 1 hurricane on Friday, according to officials with U.S. Northern Command. In addition, Coast Guard crews – some 3,000 members are aiding in relief efforts – were also busy throughout the weekend, rescuing 193 people in North Carolina, according to the service.

Federal officials said Monday that the storm was responsible for at least 23 deaths as it dumped as much as 30 inches of rain in some areas of North Carolina leading to widespread flooding that has shut down large portions of roads, including interstate highways. Some 523,000 homes remained without power Monday, according to the Federal Emergency Management Agency.

Meanwhile, servicemembers from installations across the eastern United States arrived over the weekend at staging locations including the Army’s Fort Bragg in North Carolina and Fort A.P. Hill in Virginia as well as at the North Air Force Auxiliary Field in South Carolina. Just off the East Coast, the Navy’s USS Kearsarge, an amphibious assault ship, and the USS Arlington, an amphibious transport dock, were prepared to respond if needed, according to NORTHCOM. The warships were carrying hundreds of Marines and sailors as well as Osprey tilt-rotor aircraft and helicopters. As of Monday afternoon, their assistance had not been requested, according to a Navy spokesman.

The Army has deployed more than 90 helicopters, 3,000 high-water vehicles and 30 watercraft from Fort Stewart in Georgia, Fort Drum in New York and Fort Campbell in Kentucky to assist with recovery and rescue efforts, a service spokesman said Monday. Soldiers stationed at Fort Bragg were also assisting in rescue operations. Paratroopers with the post’s 82nd Airborne Division were aiding first responders as they rescued nearly 30 people over the weekend, according to the Army.

Meanwhile, Fort Bragg officials warned the installation could receive another one to two inches of rain as the remnants of Florence moved north Monday. Servicemembers at Fort Bragg were instructed to contact their chain of command for guidance on reporting for duty in the coming days, in a post on the installation’s Facebook page. Most of the installation’s services remained closed Monday, though the commissary and the Post Exchange on North Post were scheduled to be open through 6 p.m.

At Camp Lejeune in North Carolina, officials were working to restore power Monday. Installations officials announced the base would not require non-essential personnel to return to work until Sept. 24.

Naval Station Norfolk returned back to business as usual Monday. Nearly 30 ships and 128 aircraft began the journey back to the Hampton Roads area over the weekend, and will continue to return to homeport over the next several days, according to a Saturday news release from U.S. Fleet Forces Command. The aircraft began returning Saturday and the ships Sunday.

“I am very proud of the hard work and dedication of our total force – sailors, civilians and families – who worked so hard to prepare for a major hurricane in our area,” said the commander of Navy Region Mid-Atlantic, Rear Adm. Charles Rock. “We were so fortunate Hurricane Florence did not impact us, but are thinking of those who felt the brunt of the storm in North Carolina.”

On Saturday, the commander of Marine Corps Recruit Depot Parris Island, Brig. Gen. James F. Glynn, posted a video to Facebook updating the community on operations. In the background, new Marines can be seen training. The base is set to receive new recruits Tuesday night and a graduation for Friday is on schedule, according to the recruit depot.

Stars and Stripes reporter Rose Thayer contributed to this report.