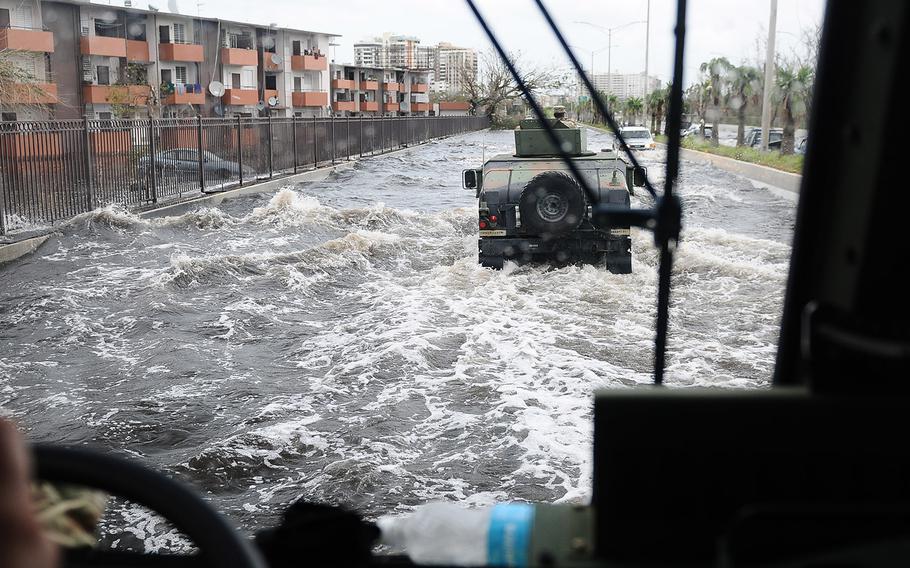 WASHINGTON — The Pentagon is shifting its response to Hurricane Maria-ravaged Puerto Rico to a land-based operation as it clears airfields and adds communications capabilities, allowing it to flow more troops onto the ailing U.S. island, defense officials said Wednesday.

U.S. Northern Command on Wednesday sent 16 Army helicopters to Puerto Rico and was preparing to deploy a portion of a sustainment brigade — some 1,000 soldiers who specialize in distribution of goods in hostile environments — to the U.S. territory of 3.4 million people left devastated by the Category 4 storm that struck the island Sept. 20, Pentagon officials said.

The military’s top general on Tuesday pledged the U.S. territories in the Caribbean would receive the full support of the Defense Department.

“We’re going to do everything we can to help them out,” Dunford told senators on Capitol Hill. “We’re anticipating what they will need to get ahead of it.”

During the last week, the military has relied primarily on moving relief supplies and launching search-and-rescue operations from the Kearsarge, an amphibious assault ship staged between Puerto Rico and the U.S. Virgin Islands. National Guard members along with Marines and sailors from the Kearsarge had cleared runways at 10 of the island’s airports by Wednesday, drastically increasing the flow of aircraft flying onto the island, Davis said.

The military aims to fly about 10 planes per hour into the region Wednesday to provide relief. Only three to six aircraft had been able land each hour previously, Davis said.

Nearly all of Puerto Rico remained without power Wednesday and nearly half of its inhabitants did not have access to drinking water, according to the Pentagon. The military had helped restore some level of power to 59 of the island’s 69 hospitals by Wednesday, but most of them remained unable to provide advanced care.

The Pentagon has tasked the USNS Comfort, a Mercy-class hospital ship based at Naval Station Norfolk in Virginia, to leave for Puerto Rico by the weekend. The ship has 1,000 hospital beds and carriers medical evacuation helicopters. But it will be well into next week before the Comfort arrives in the region, Davis said.

The Pentagon is also sending small medical and surgical teams to Puerto Rico and the U.S. Virgin Islands, he said. Davis did not provide specific information about the units or where they would operate.

At the request of the Federal Emergency Management Agency, the military shipped about 350 satellite telephones to aid people in Puerto Rico and the U.S. Virgin Islands, many of whom have been unable to communicate with family members and friends for nearly a week, Davis said. Cell phone service remains down for about 95 percent of Puerto Rico.

It was also sending military teams – including tactical communications specialists from Georgia’s Fort Stewart and civil affairs experts from Fort Bragg – to Puerto Rico to assist efforts to increase communications among government agencies and within the local population, officials said.